The cleaning, remedial conservation and remounting of the Edmontosaurus skeleton for the National Museums of Northern Ireland, Belfast

This project was largely undertaken on site in the galleries during the recent refurbishment of the museum. The bones of this specimen were not particularly strong or well mineralised but were quite light and weak. The specimen was extremely dusty and dirty (fig 1). It was cleaned first with a vacuum cleaner and soft brush, then by gentle swabbing with Synperonic-N in water, wiped dry immediately. Most of the bones had drops of paint on them (figs 2 & 3) that had to be removed with a scalpel (several hundred in total). Occasionally, when on plaster, they were painted over with artists acrylic paints. 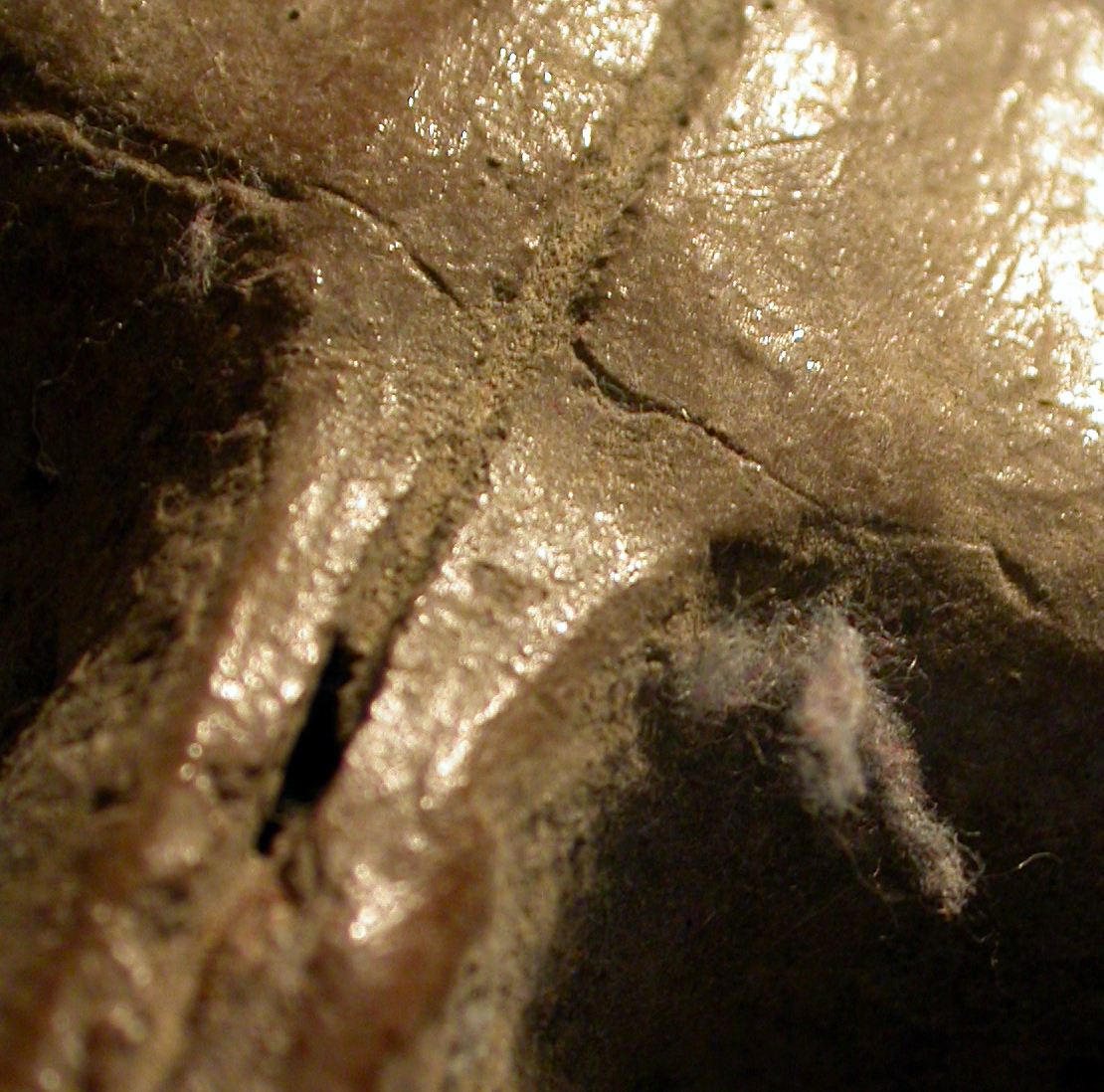 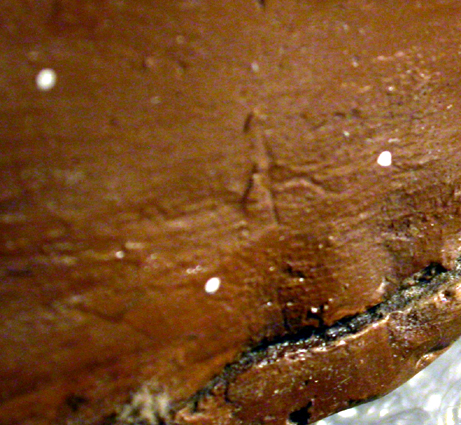 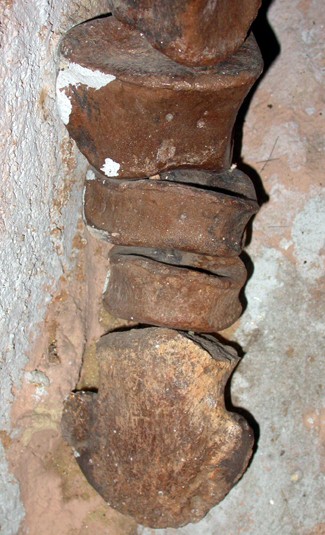 Many of the bones were damaged (figs 4 -9), ranging from cracks to severe damage where pieces had become detached and even smashed during the process of the skeleton being moved to storage and being in store for the duration of the renovation works. Of the vertebrae, fourteen neural spines required fixing, as did five transverse processes. One centrum had been so severely damaged it had fallen from the specimen and had to be completely rebuilt (fig 5).

Five ribs were repaired, one of which was detached, and three chevrons. The illium had a crack right through it. These were all fixed with paraloid B72 adhesive, consolidant and where necessary gap filler. The centrum and adjoining pieces were rebuilt and re-attached with plaster of paris. 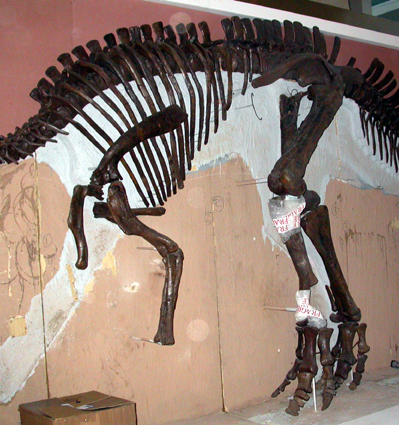 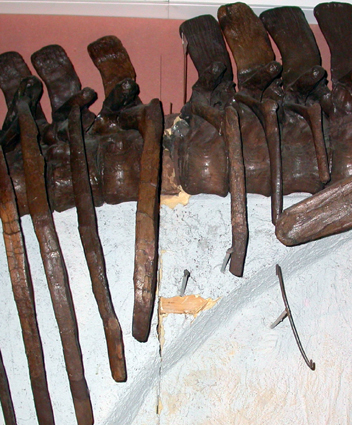 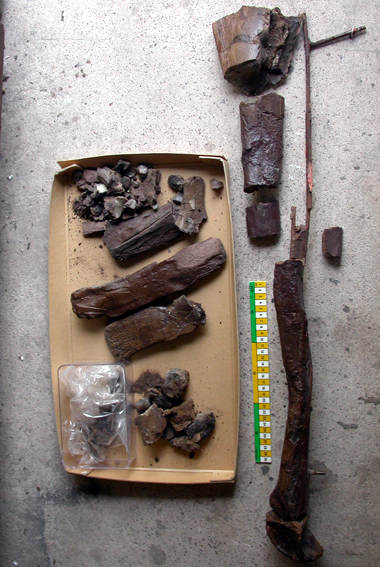 The distal end of the tibia had suffered a major impact which had smashed it into several main pieces and dozens of fragments (figs 6 & 7). This was reassembled (figs 7, 8 & 9) using paraloid B72 adhesive, consolidant and gap filler. Some gap filler was made from paraloid and glass beads and was used between closely associated pieces of bone, and larger areas were filled with plaster of paris. The adjoining fibula (figs 6 & 9) was broken into five main pieces and several dozen small pieces and lots of dust-sized particles. Most of the breaks were new, but some were obviously old breaks that had been glued either when the specimen was initially excavated/prepared or when the specimen was mounted. This was repaired in a similar way to the tibia, above. The fibula was secured back into position, with the lower and shorter stub of metalwork glued into the tibia with araldite and the top stub or metalwork secured with plaster. 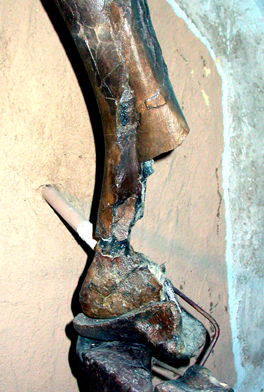 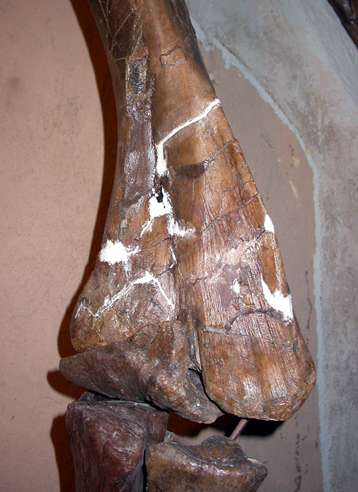 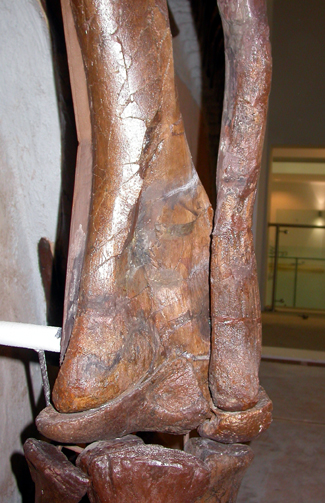 The ischium and pubis were hung back in place, held secure with polypropylene fishing line, painted to match the bones so it is not so obvious. The lower right forelimb had brackets that required screwing to the wooden upright background. However, the brackets stretched across two sections that had not been as tightly pulled together as before so the screw holes and brackets do not quite match up into their previous positions. The left forefoot had previously attached to the scenery which has now been removed. The foot is therefore now attached to the metalwork supporting the radius and ulna, with wire and araldite. One thick piece of wire is inserted between the radius and ulna.

One terminal phalange on the rear left foot had been broken in half at some point in the past and the piece appears to have been lost. This had to be modelled-in, with plaster. The mandible had three breaks, all in the articulation area. These were repaired with paraloid B72. The skull should really have been stored and transported upside-down as when the right way up the jugals are vulnerable, and the left one had broken for this reason. This meant that the skull lay partly on its right side when in the box, possibly the reason why the right zygomatic arch was also broken. The skull was attached to the mount with the bolt provided. 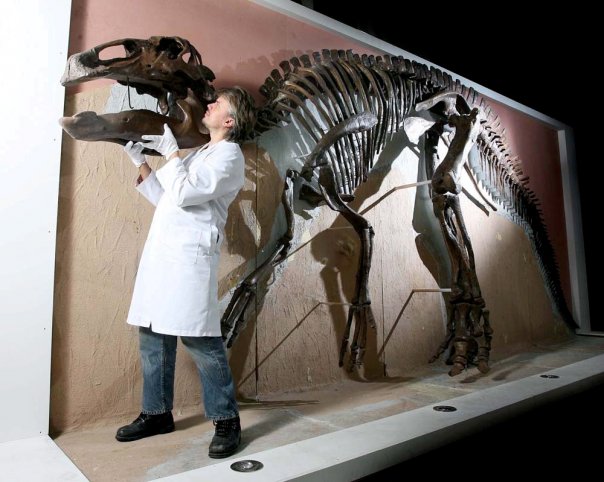