This porpoise skeleton (102cm long) was dusty and dirty. Various wires holding the bones together had become loose (such as those attaching the pelvic girdle and those securing the scapulae and forelimbs) and various bones had slipped and were at the wrong angle (the chevrons, some of the vertebrae and the forelimbs). The support was made of an odd mixture of a poorly shaped and badly painted plank, one thick tube of bamboo in the middle holding an aluminium trough under the centre of the spine and a thick upright wire at either end of the skeleton. The wire running through the vertebrae was sticking out of the rear vertebrae by an extra 7cms. All these things required attention. 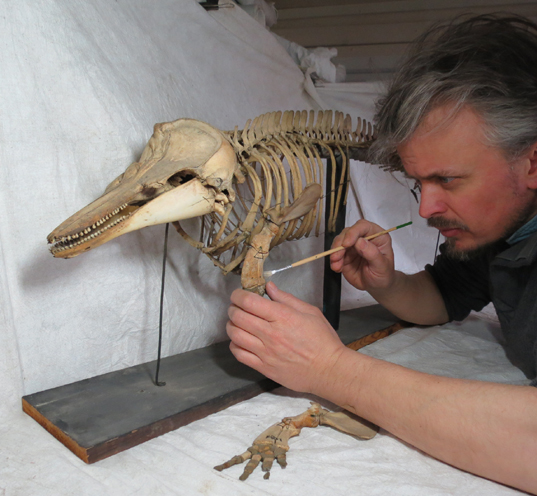 The specimen was first assessed and photographed. Then it was gently cleaned with a soft brush and vacuum cleaner. It was still dirty and stained so it was carefully cleaned further by swabbing with Synperonic A7 (an alcohol ethoxylate used for a variety of conservation processes in museums, including as a mild detergent) in de-ionised water. Small areas were cleaned at a time and were swabbed again with just de-ionised water to clean off the detergent, drying-off the bones immediately each time with dry lint-free paper towels.

The bones were re-aligned and rewired where necessary, re-using the excess thin wire that had been trimmed off elsewhere on the skeleton for consistency. The two thin small bones of the pelvic girdle were hanging excessively low and were very loose, so these were re-wired higher up and closer together, swinging less. The forelimbs were just hanging from a single point, orientated incorrectly in an almost vertical position and were too close to the skull, so these were moved rearwards a bit and re-orientated to be pointing backwards at an approximately 45 degree angle. The rib cage had collapsed inwards and was far too narrow, giving the body a very odd shape. Therefore a strong ‘C’-shaped wire was inserted through some of the existing wires holding the lower portions of the ribs in place in a way that it not only pushed the ribs out laterally into their correct positions but it held the ribs there, in shape. This new wire was painted-out to match the bones so it was much less visible.

A temporary wooden frame was built around the specimen to suspend it from (using standard conservation cotton tape), and the three old upright supports were removed (the two wire uprights and the bamboo pole) as well as the rough plank. The vertebrae tended to slide around on the vertebral pole at a variety of angles, so a dab of reversible glue was put between each vertebra whilst they were temporarily held in the correct orientation with masking tape. The glue used was the reversible conservation adhesive Paraloid B72. Two thin twisted wire cables were secured in place with crimps/ferrules to suspend the skeleton from when it was finally put into its display case. Where these cables are beside bones the bones are protected from the cable with polypropylene tubing. Where these cables and tubing lies next to the bones it has been painted to blend in and be less conspicuous.

The image above shows the porpoise before work started. The image below shows the same skeleton after cleaning, conservation, re-arranging some of the bones and removing the old mountwork. When put on display the cotton tape was removed and the thin cables utilised.