The skeleton of a giant deer newly acquired by the School of Biological Sciences, Durham University, was inspected in September 2005 after it had been damaged during transport and a report of its condition produced. This informed the subsequent remedial conservation work described below that was undertaken by Nigel Larkin a month or so later.

This superb specimen seems to be almost 100% complete and may represent a single complete individual rather than an amalgam of several different skeletons as is often the case. However, all the major limb bones had been deliberately broken and glued back together when the skeleton was originally mounted (a common practice at the time). This meant that there were weaknesses in many of the bones and these gave way during the accident - in particular the metatarsals and metacarpals. Some breakages were new, such as in the ribs and the pelvis, and some old breaks gave way just a little, enough for aged gap-fillers to fall out - such as in the antlers.

The mounted skeleton is secured to a large base board and the foursquare stance of the skeleton is a standard and secure way of mounting such an animal. However, because the skeleton had not been packaged properly prior to transport or secured properly to stop flexion, rotation or vibration the whole of the vertebral column along with the ribs broke away from its mount at the rear and subsequently rotated. This resulted in many ribs being broken and some vertebrae being broken. As a consequence of these stresses on the mounting framework some of the leg bones also split - sometimes along old breaks, sometimes creating new breaks. Some small bones, particularly the sesamoids, were damaged so badly that they actually needed remodelling as the bones had simply powdered away. The skull and antlers had thankfully been removed from the skeleton prior to transport, but even so these were also damaged during handling. On one side the main beam to the rest of the antler was snapped not far from the skull during unloading, witnessed by staff. As a result of this mishandling, there were many cracks in the centre of the palms of each antler where old gap fillers had deteriorated and lost strength, and several of the tines were loose.

Details of the conservation materials and process used:
Before work commenced, the whole vertebral column was rotated back into its normal position and was held upright and secure by tying the top of the neck metalwork to the roof girders. This prevented slippage and further damage being inflicted on the bones whilst work was in progress.

Cleaning: It was important that the specimen was thoroughly cleaned before conservation work started. Soft brushes were used to sweep all the loose dirt, dust, cobwebs and smallest fragments of broken bone into the nozzle of a vacuum cleaner. The bones were then very gently wiped with a sponge dampened with clean tepid water containing Synperonic-N (a museum grade detergent) at about 5% by volume. This was just enough to dampen the surface of the bone before it was wiped dry with a clean, strong, soft and absorbing paper towel. The small broken pieces of bone were collected for re-attachment.

Consolidating, gluing and modelling:
Once cleaned, an assessment was made of all the damage now visible, and repairs were initiated. Where broken bones needed repairing, the two sides to be glued were consolidated first before adhesive was applied. The adhesive employed was the methacrylate co-polymer Paraloid B72, straight from the tube. This is easily removed by dissolving it in acetone. The consolidant was also Paraloid B72, in acetone between 5% and 25% weight:volume. Where gaps were still left after gluing some bones together, an inert gap-filler was made-up out of Paraloid B72 consolidant at 25% in acetone mixed with glass beads 44 microns diameter at a ratio of about 1:3 by weight. This too is removable with acetone. The gap-fillers were painted with acrylic paints to closely resemble the surrounding bone or antler.

Some of the vertebrae of the tail were damaged when it fell off after the pelvis to which it was attached was broken in two. These were mainly made of plaster of paris and seem to represent the only parts of the skeleton that are not the original bone. They were repaired with Paraloid B72 and painted with acrylics. The very last vertebra was missing so was modelled in using Milliput epoxy putty.

The pelvis had suffered some significant damage. This is where the main spinal rod was attached and therefore when the body rotated during transport this is where the greatest stresses were felt. The pelvis was broken into two pieces, so that the tail section came apart and fell off, which is when it received the damage described above. This area takes the weight of the rear half of the spinal rod and the associated vertebrae and ribs so a strong repair had to be made. The broken pelvic fragments were consolidated and glued back together, and the gaps filled. The fused sacral vertebrae and the tail section were adhered to the rest of the pelvic girdle as this takes the weight of the spinal column: bone contacts were consolidated and glued, but as there was still quite a gap between the bones, Milliput epoxy putty was employed to make a firm join between the two. This was then painted out, as was a metal bracket that was newly made to fit inside the illia, attaching to the bolts that stick out of the heads of the femorae. This is to provide extra strength and rigidity if the pelvic bones ever give way again.

The weakest point of the mount was where the vertebral column met the metal cross-member between the two front legs. This had given way during the accident (a bolt had sheared) and needed securing in a much stronger fashion. A new collar was made out of aluminium that secured the two pieces of metal to one another as they met at a perpendicular and this made for a much more secure connection. A couple of vertebrae around this area had suffered damage and needed repair.

The heads of several ribs were broken and needed repair and gap-filling: right ribs no. 3, 6, 11, 12 and 13. The distal ends of the following ribs needed also needed consolidation, repair and gap-filling before re-attaching to the wires that hold them in position: Right 3, 4, 5, 6 and left 2, 12, 10. Two ribs needed repair along their whole length where they had split: right 13 and left 12. Right 5 had broken in two pieces across its upper portion. The wires at the heads of the ribs were replaced in many instances, and painted-out.

The sesasmoids of both the front feet and rear right foot had all suffered damage and not only needed repair but also some remodelling work, undertaken with Milliput epoxy putty which was then painted.

The antlers were riddled with old joins. Many had fared well, but others had given way and in many places old gap-fillers had failed and fallen out. All these gaps were consolidated, glued, filled with the inert gap-filler described above, and painted. The main break on the left beam was consolidated and filled with gap-filler after it had been pushed back as close to the skull as possible to minimise the size of the join. The broken hyoids were repaired, remodelled and re wired.

The base board was sanded down and painted, and nails removed that were sticking out of its sides. The whole skeleton was such a pale dusty grey colour that a thin coat of dilute Paraloid consolidant, between 2% and 5 % in acetone, was applied to all the bones and the antlers with a brush, to bring out the colours of the bones. This will also help to protect the bones from changes in relative humidity etc. Finally, the skeleton was placed in the desired position, and the skull and antlers were reattached to the body and hung supported from the ceiling. 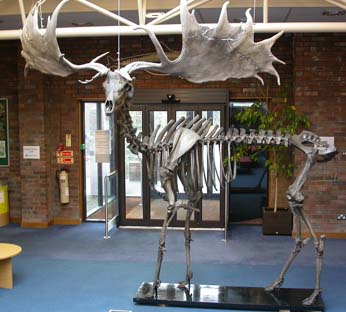