The aim of this project was to remove a polyurethane foam field jacket from around a very fragile Woolly Mammoth skull (from excavations at La Cotte de St Brelade, Jersey, in the Channel Islands) using small hand tools and appropriate health and safety procedures. Also to undertake repairs and consolidation to the bone and teeth as required and to make the skull suitable for display including providing some support. The jacketed specimen was approximately 100cm by 75cm by 75cm and there were only six days avalable to do the work. 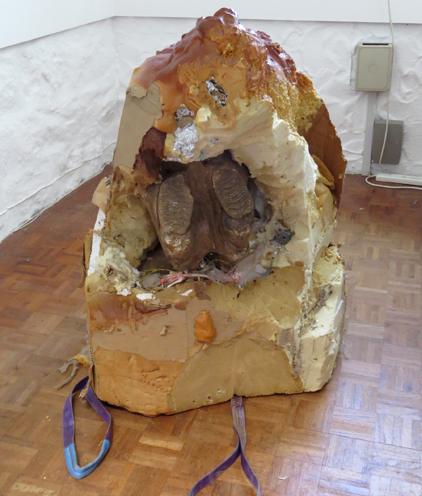 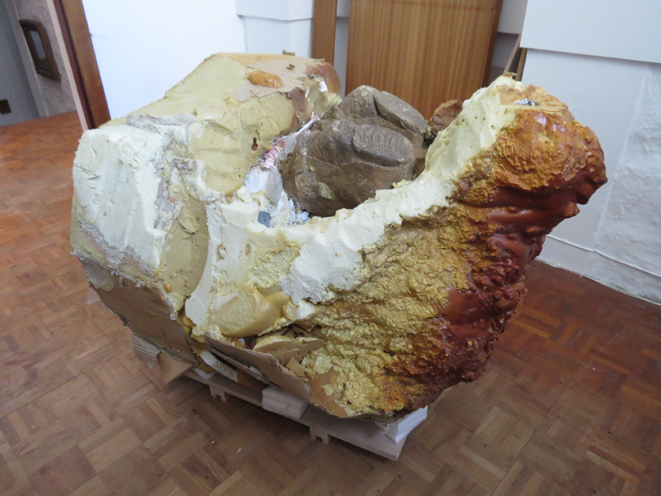 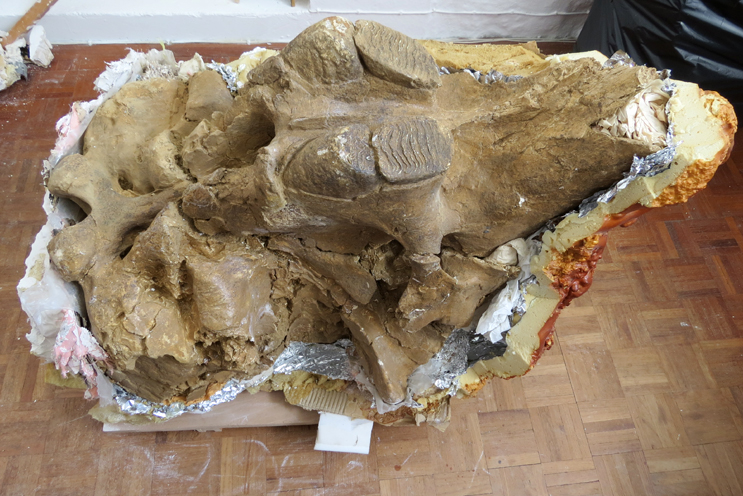 Above: left, the specimen before work commenced; middle, the specimen laying in its proposed display orientation; and right, halfway through removing the fieldjacket.

Whilst this is a really nice fairly complete specimen, it consists of poorly preserved sub fossil bone with no strength. The consolidant applied in the field did not penetrate the specimen to any depth at all and simply formed a film on the surface of the bone, leaving the internal structure of the bones as soft as dried cheese or soft chalk. The specimen is therefore riddled with serious deep cracks. As such, the specimen cannot be stored or moved without considerable support or it would fall apart under its own weight. This posed problems when faced with removing the old supportive jacket. The solution was to make a permanent wooden base for it to sit on, just a bit larger than the ‘footprint’ of the skull as it lay in its display orientation, upside-down with the grinding surface of the molars uppermost; and as the foam jacket on the underside of the skull was removed it was replaced section by section with plaster of paris reinforced with hessian scrim.

The big, bulky, field jacket had largely been made from expanding Polyurethane foam and foil but it also included lengths of angled iron, wooden batons, metal straps, long metal rods, and a bamboo pole as well as tissue, newspaper, loo roll, kitchen roll, plastic sheeting, polystyrene, cardboard and plaster of paris with cotton sheets and hessian. This was removed with a selection of knives, keyhole saws, pliers, pincers and scalpels whilst wearing appropriate protective clothing (dust mask, gloves and apron) and hoovering up the dust regularly. In several places the polyurethane foam had stuck to the bone surface and had to be removed with scalpels, sometimes after softening it first with acetone. 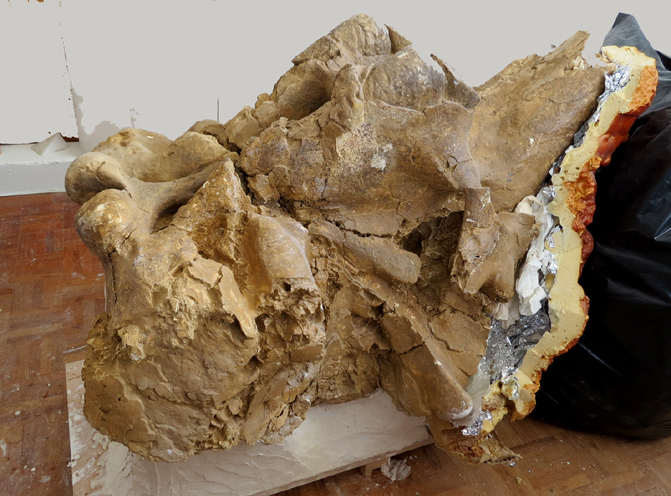 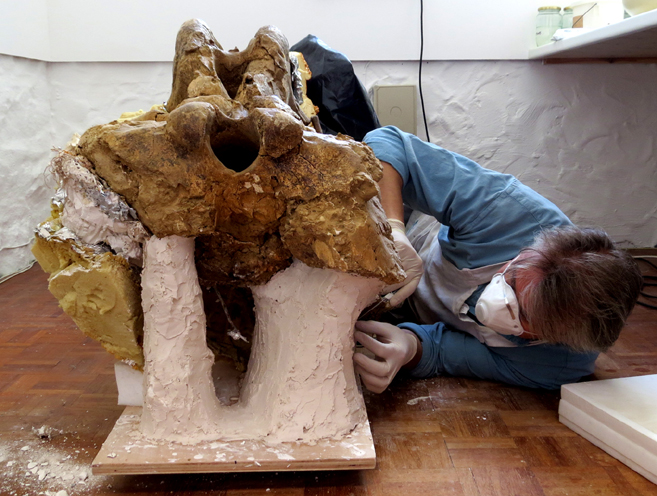 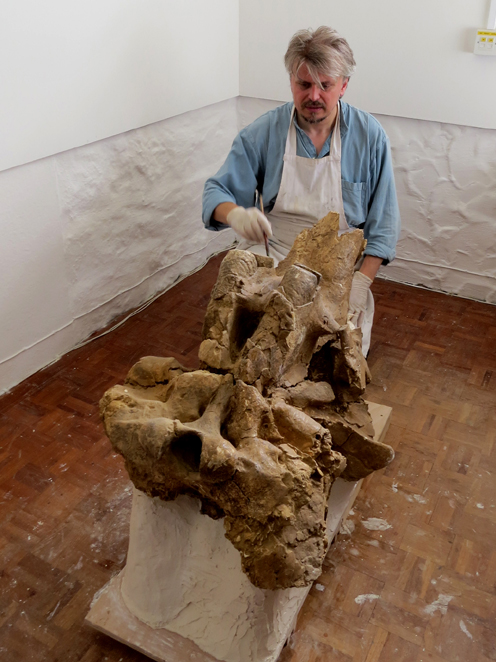 As well as many significant cracks running through the skull and some pieces of the skull lying displaced, the surface is also riddled with many small fine cracks. There were some loose breaks that had to the repaired. The lower portions of the specimen (the upper part of the skull in life) were found to be very fragile unconsolidated sediment and bone, so these areas were consolidated with Paraloid B72 in acetone to provide some strength to the surface, as well as inside the alveolus (tusk cavity) which was one of the most fragile areas. The skull itself has its occipital condyles very well preserved and exposed as well as its foramen magnum, pallet and teeth (upper third molars in latter stages of wear and its fourth set just coming in to wear). 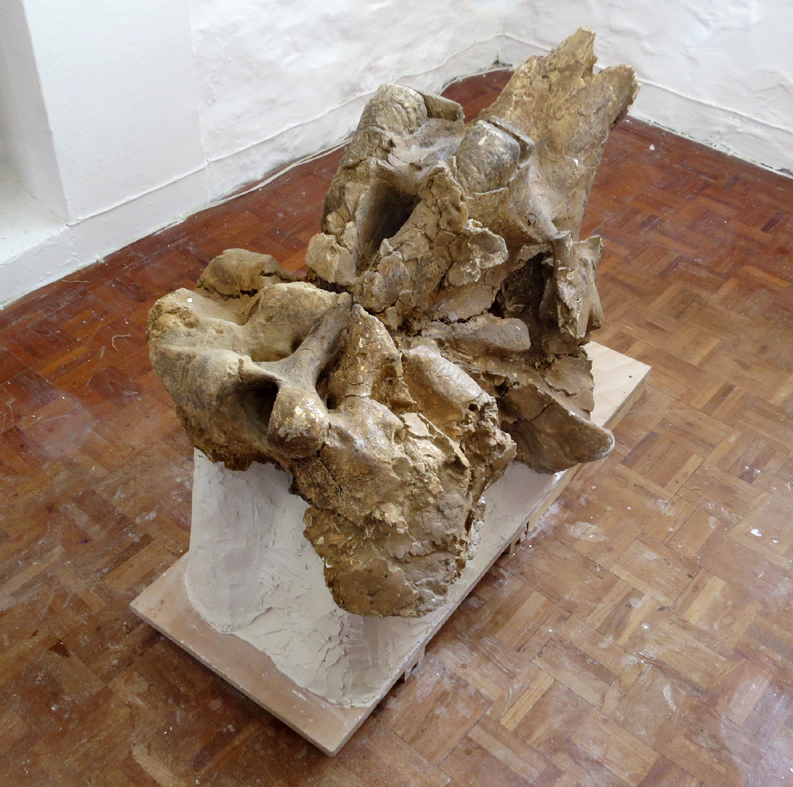 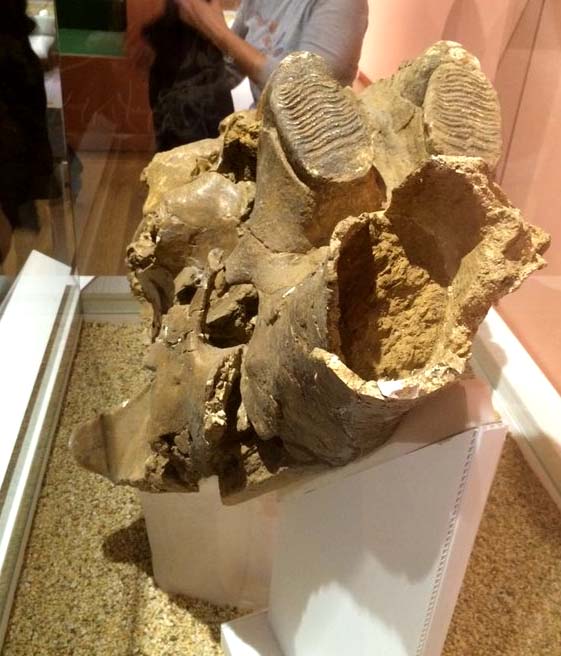 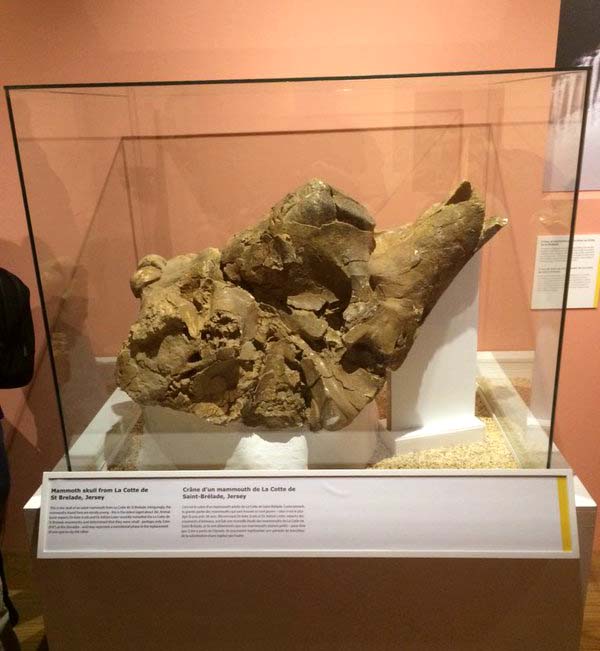 Above left, the skull at the end of the project. Middle and right, the skull on display in the Jersey Museum (photos courtesy of Dr Matt Pope).