The investigation, conservation and remounting of a large ichthyosaur for Dorset County Museum - a project supported by the GA's Curry Fund. 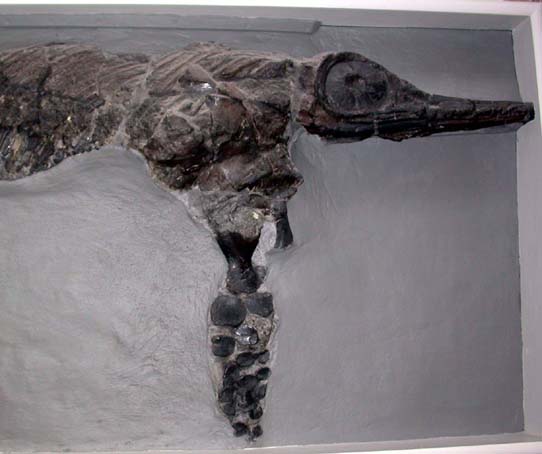 While undertaking a conservation audit of the geology collections at Dorset County Museum and cleaning fossils, a large (2.3m long) and almost complete wall-mounted ichthyosaur in a frame (left, before conservation) was found to have a deep, long crack running along the top of the specimen. Purchased in 1885 by the museum and presumably mounted soon after, it was not known how long this crack had been there and whether or not it was a symptom of internal pyrite decay (small areas of pyrite decay on the surface had been treated before). As the specimen was mounted above a public stairwell, it was decided for health and safety reasons, as well as for the long-term future of the fossil, that the specimen should be removed and investigated. 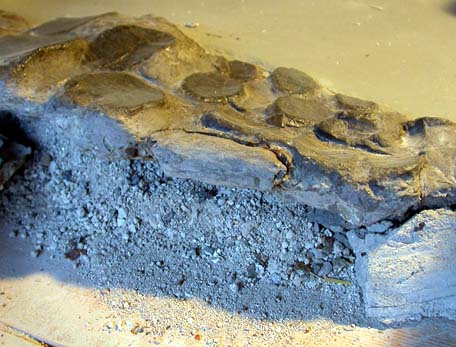 This proved to be more complex than expected - it was too heavy even for six healthy people to move easily and, when the specimen was dismantled to assess its condition, it was found that the mortar it was embedded in had either deteriorated badly (having been reduced to powder over the years) or had never set properly (see photo on the right, with deteriorated mortar under the forelimb). Fortunately, no traces of pyrite decay were found inside the specimen, so the original, worrying crack was probably due to the sagging and settling of the specimen as the surrounding mortar failed. The top layer of mortar was quite strong and this had disguised what was happening internally.

As the mounted specimen had been far heavier than necessary, the opportunity was taken to reduce its weight by using modern materials and techniques. All the old mortar was removed, as well as all the original plaster gap-fills, beeswax and ancient organic glues (samples were kept for future research). These were replaced with modern, archival-quality materials, including Plastazote foam, Jesmonite acrylic resin and Paraloid B72 (used as adhesive, consolidant and gap-filler). About 190kg of mortar was removed and replaced by about 25kg of wood, resin and glass fibre.

The opportunity was also taken to clean the whole specimen and prepare it further. It had been covered in layers of old varnish and had traces of paint around the edges. These were removed by using an air abrasive 'Swamblaster' unit that provides a tiny jet of compressed air, lightly laced with sodium bicarbonate. veneer of sediment clinging to most of the specimen was carefully removed, revealing much more detail than previously seen. This was particularly apparent on the skull where the splendid sclerotic rings were greatly enhanced. 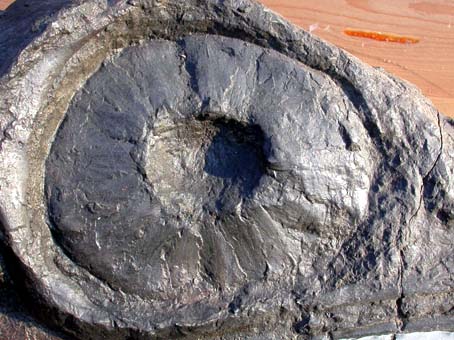 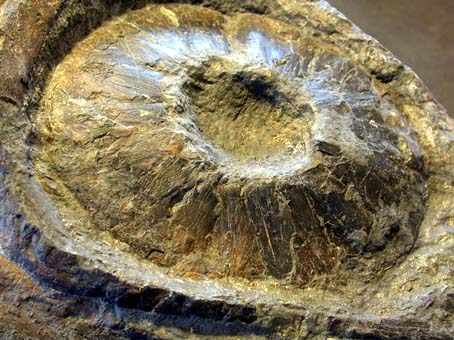 Sclerotic ring before (left) and after (right) cleaning and preparation.

The old wooden frame was repaired, stripped of paint and waxed so that it matched the frames of other marine reptiles in the Jurassic Coast Gallery similarly conserved a few years ago. The securely remounted, re-prepared and much lighter specimen was then swiftly put back on display and will now be inspected every six months for signs of pyrite decay.

This project was supported by the Geologists’ Association's Curry Fund, the MLA's Preservation of Industrial and Scientific Material (PRISM) Fund and the Association of Independent Museums Pilgrim Trust. You can see the finished specimen below.

A version of this report appeared in the magazine of the Geologists’ Association, Vol. 9, No. 3, in 2010. 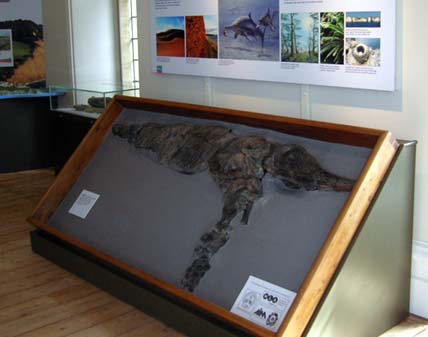 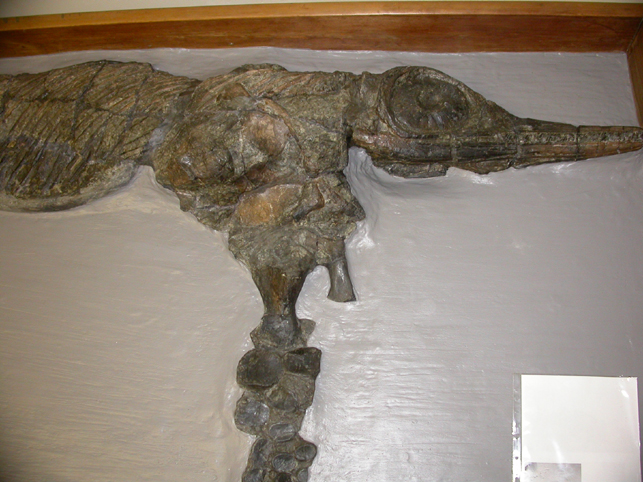 The finished specimen on display.