Excavating and lifting a bison skull at Swanscombe, Kent, at short notice for Oxford Archaeological Unit. Then preparing, cleaning and conserving it many years later.

In November 2004, Nigel was asked at short notice to excavate and lift a large bison skull discovered in an archaeological excavation in the Ebbsfleet Valley near Swanscombe, in Kent, by Dr Francis Wenban-Smith of Southampton University. He was working on the building site of the new high-speed Channel Tunnel Rail Link on behalf of the Oxford Archaeological Unit (who in turn were working on behalf of Rail Link Engineering (RLE)) where it runs through a well-known richly fossiliferous area. He called one afternoon to ask if it were possible for Nigel to be on site (300 miles away) first thing the following morning to excavate a bison skull and have it lifted out of the ground by 2pm. 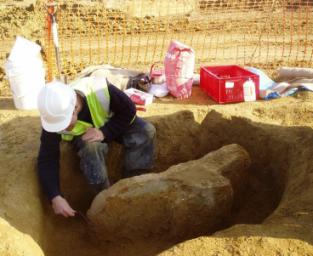 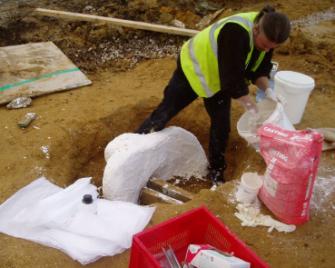 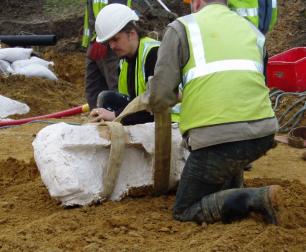 This magnificent find, a fairly complete skull with both horn-cores intact had just been discovered on the very last stretch of link road to be carved out of the landscape, and the workers with their bulldozers were waiting to finish off the final section of the roadway. The particularly large and intact yet fragile specimen clearly needed specialist attention. A very solid jacket was made to encapsulate the whole specimen once it was fully excavated - one robust enough to protect it, without flexing, when lifted by the bulldozer and to keep it safe on the journey back to Oxford.

This jacket was made of plaster of paris and coarse hessian scrim with wooden splints over protective layers of tissue paper and foil.

In 2010 this huge specimen was dejacketed, prepared and conserved so that the specimen could be identified and written in to the archaeological report. The specimen is shown below left before preparation (the hammer is just for scale!) and after preparation, below right. As the specimen had been fractured during burial processes and the bone preservation was weak, the decision was made to leave the skull and horn cores partly supported by the rigid plaster jacket. To do otherwise was to risk the specimen breaking in many places, and it had already been prepared enough to allow a full identification and description. A secure wooden and Plastazote foam base was made to transport and permanently store the specimen. 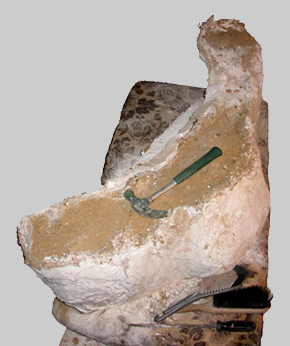 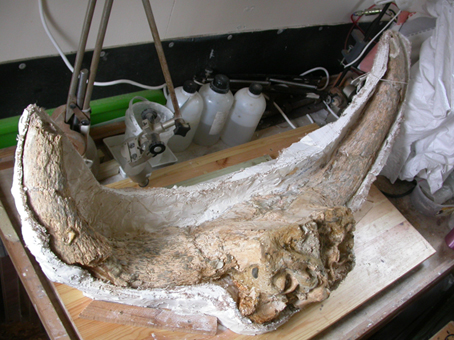