Cleaning, conserving and repairing skulls and skeletons in the Museum of Anatomy in the School of Biomedical Sciences, University of Edinburgh 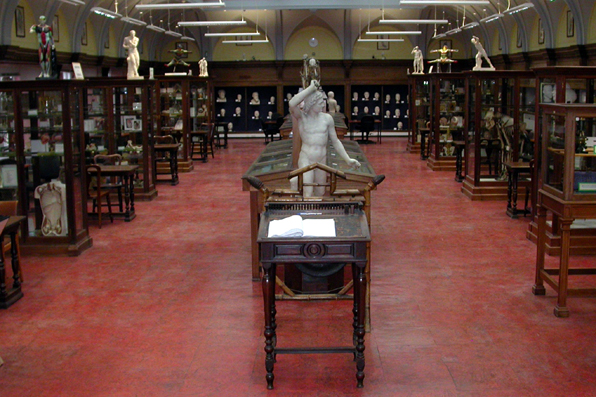 Edinburgh’s Anatomy Museum (left), founded and developed by the Monro dynasty, flourished under Sir William Turner, Professor of Anatomy from 1867 to 1903 and thereafter Principal of the University till his death in 1917. Turner’s main interests were in comparative mammalian anatomy, anthropology and craniology. Edinburgh was perhaps unusual in that these aspects of the study of evolution remained so firmly based in the Medical Faculty. The Anatomy Museum was the central feature of Rowand Anderson’s Medical School, designed as a three-storey top-lit galleried hall, with skeletons of whales and dolphins suspended from the ceiling and a wealth of historical and anatomical specimens on display. 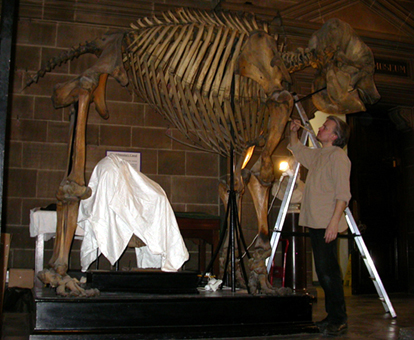 In the 1950s the hall was subdivided into three separate storeys and many of the non-human specimens were transferred to other institutions (for instance some of the whales are now on view in the Royal Museum of Scotland in Chambers Street).

The imposing museum lobby still contains elephant skeletons (right) and other exhibits from the original museum. A number of historical treasures survive in the Anatomy Museum, including the skull of George Buchanan - sixteenth century Scottish humanist and tutor to King James VI (founder of the University) - and a collection of models of heads, and life and death masks made in the nineteenth century by the Edinburgh Phrenological Society.

The conservation work undertaken by Nigel Larkin on the skeletons of the murderer Burke and the rickets-sufferer ‘Bowed Joseph’ (both Edinburgh residents) that are on display in this museum is described elsewhere on this website (click on their names if you want to read more). The work he undertook on the smaller specimens is described below. 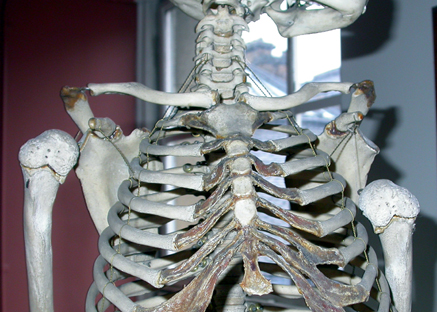 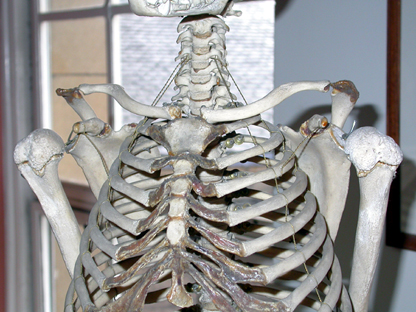 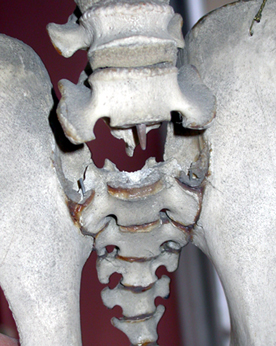 Small chimp skeleton (above). Left: The metalwork for the left shoulder had become detached and lost and the limb was poorly tied on with thread. As a consequence the limb was hanging far too low and required re-securing (middle) with a piece of thick wire bent to the right shape for the humerus to hang from. It also suffers from a broken back - the vertebrae needed to be realigned (right) and glued but this cannot be done until the missing intervertebral disk is replaced.

This human skeleton (above), used for teaching, was hanging in a corner of the museum. The left foot of this skeleton was loose and prone to falling off. This was secured back into position with clear polypropylene thread (on the right). 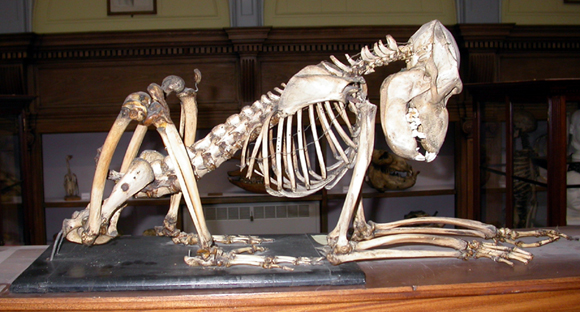 We advised that this baboon skeleton (above) requires remounting. The rear right leg is leaning too much to its right, and the head and neck seem to be too low. All the fastenings and articulations were checked and nothing seems to be loose but really, the specimen requires some remounting work. It would be more secure and less liable to slumping if the head and shoulders had some sort of vertical metal support at the front. Because it leans forward so much, pressure is put on the mount at the rear and on the fragile pelvic bones - especially when it is moved. Also, the base board is too small so the forelimbs are extremely vulnerable. Several digits of the hands are missing as a result. 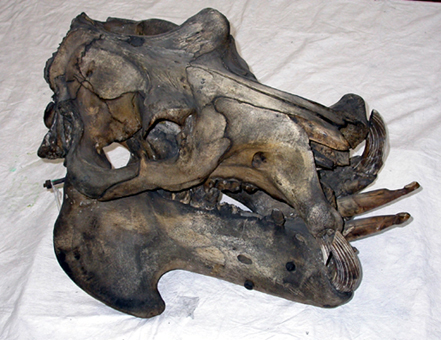 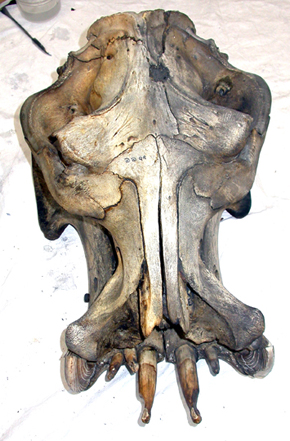 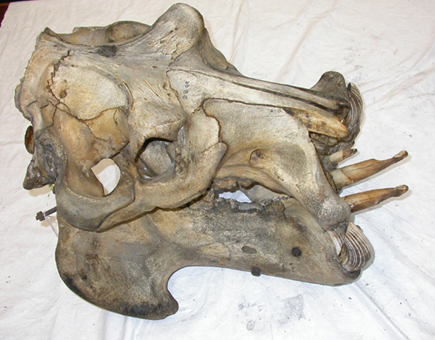 This hippo skull (above) was very dirty (left)and was first cleaned with a soft brush and vacuum cleaner. Then, it was swabbed with Synperonic A7 in warm water, wetting very small areas at a time and drying them off with a paper towel instantly. In the past the skull has expanded, pulling apart along suture lines. This is possibly from being stored close to a radiator. Middle: the skull halfway through cleaning. Right: the cleaned skull. 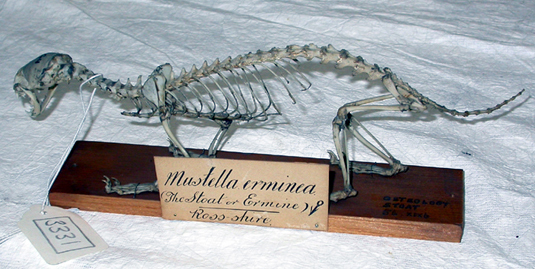 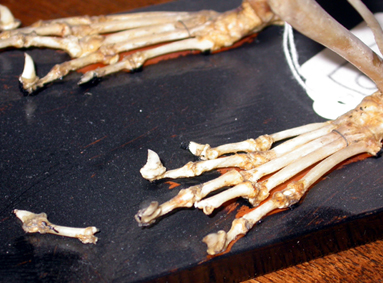 Synperonic A7. This is an alcohol ethoxylate, recently replacing ‘Synperonic N’ that has been widely used by conservators in museums for decades as a mild detergent to clean osteological specimens and other material. It is used as a detergent, wetting agent, surfactant, and an emulsifying and dispersing agent.

Paraloid B72 This is a reversible methacrylate co-polymer used by many museum conservators either as an adhesive or consolidant. When used as an adhesive to repair a break, first an application of consolidant is applied either side of the break, to ensure a good bond. The consolidant used was Paraloid B72 in acetone at a strength of 10%.

Advice was given about an Integrated Pest Management policy and environmental monitoring equipment.