Cleaning, conserving and re-mounting the giant deer skull and antlers at the Sedgwick Museum of Earth Sciences, Cambridge. Nigel Larkin 2017.

Condition of the specimen. The specimen was dusty and dirty with some paint splatters and some obvious signs of damage and wear that required tidying up. The old metal mount was a mixture of different materials added to try to give the specimen adequate support over the years, a difficult task because the skull has split right through the temple on the left side and a small portion of the left side of the skull with its antler is separate from the rest of the skull and its right antler. This is why two large metal bands had been secured around the rear of skull in an attempt to keep it together. The specimen could not simply be glued back together as there would be too much strain on the skull due to the weight of the antlers either side. A completely new metal mount had to be made to provide sturdy adequate support so that the pieces of the skull could be held in place without grating against one another.

Below, photos of the specimen before cleaning and conservation. 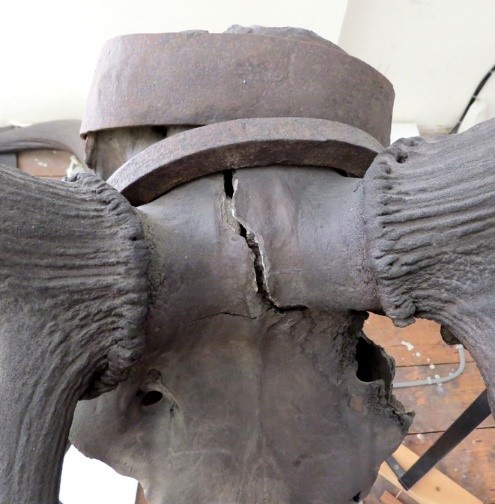 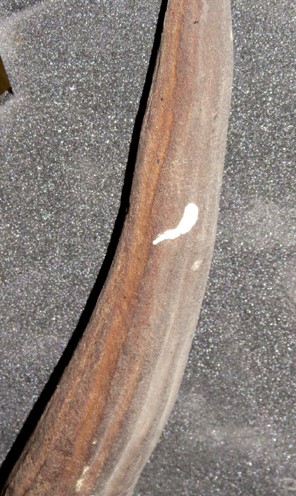 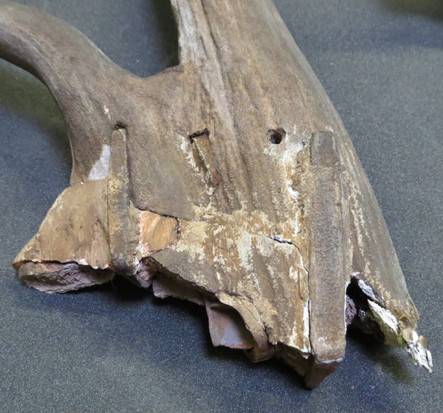 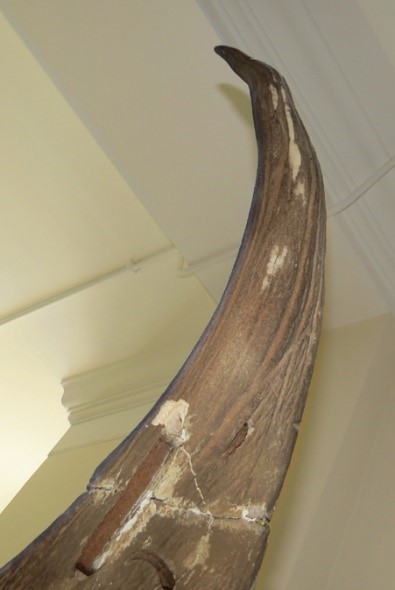 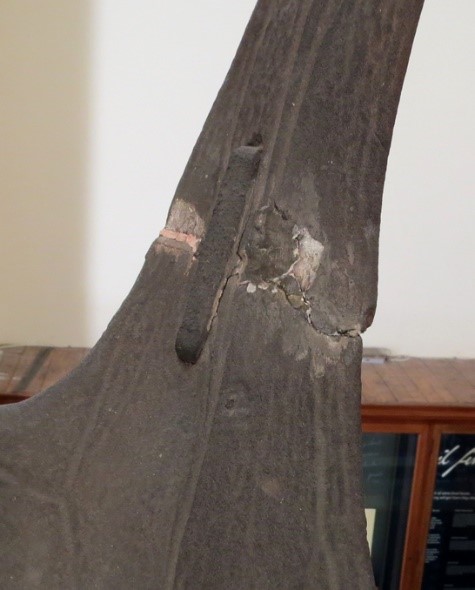 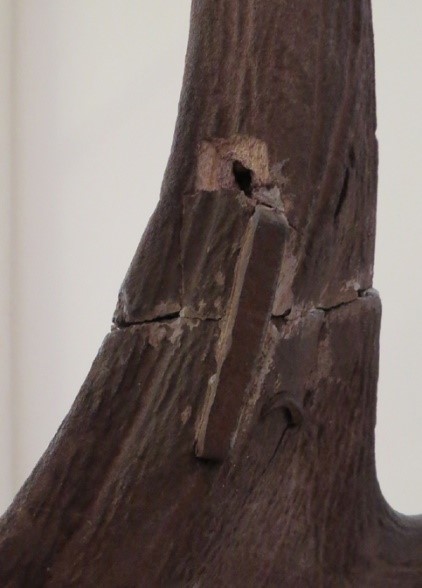 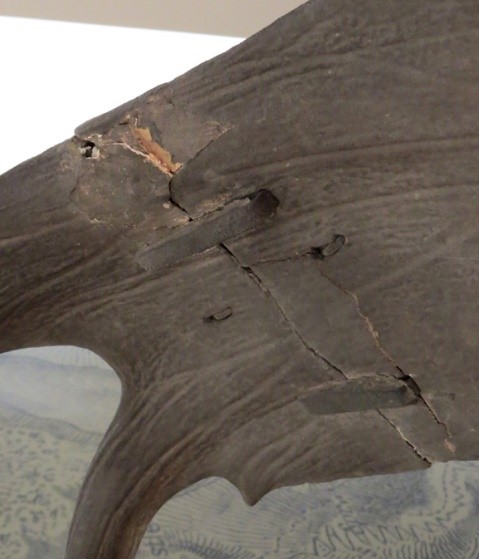 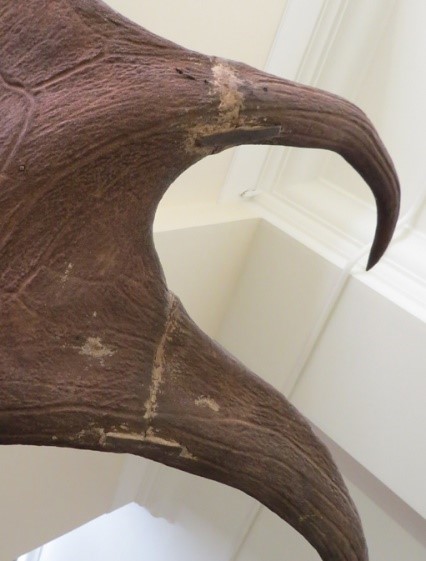 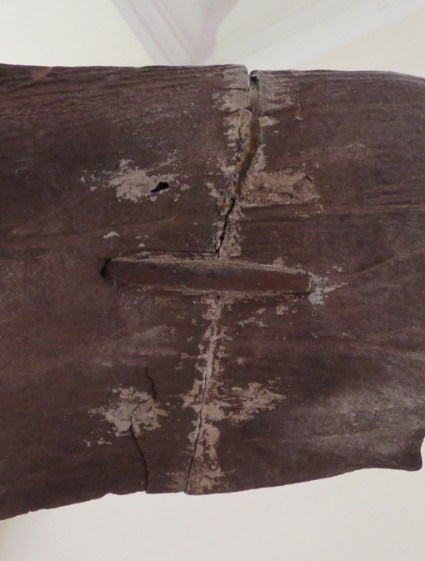 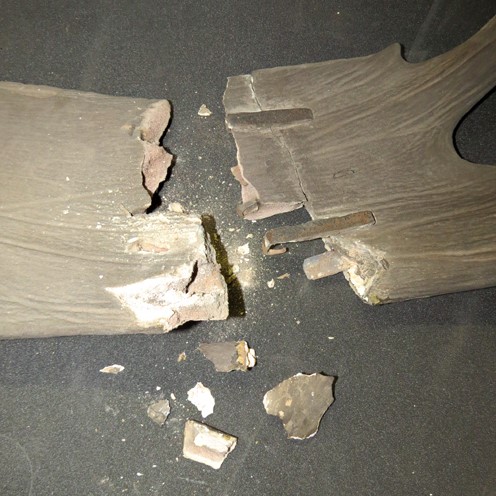 Cleaning and conservation methods and materials. All methods and materials used on this specimen were of appropriate ‘museum quality’: i.e. removable and/or reversible and as non-invasive as possible. The gentlest methods were always used as a matter of course. Cleaning was undertaken with a gentle jet of compressed air followed by brushing with a soft artists brush towards a vacuum cleaner nozzle held nearby to catch the dust, with fine gauze over the nozzle so pieces were not lost. The skull was cleaned with Synperonic A7 in de-ionised water, cleaning small areas at a time and patting dry quickly, so as not to wet the surface unnecessarily. This was followed by cleaning small areas with brushes dampened just with deionised water, again keeping the bone as dry as possible.

Once fully dry the skull was consolidated with Paraloid B72 at 5% in acetone to help preserve the friable areas and to bring the colour back to the bone. Damaged and scuffed areas of the antlers were also consolidated with Paraloid B72 at 5 to 10% in acetone, especially along the edges of old breaks. Two significant breaks – along old joins at the distal portions of each antler (see last image above for one example) - were re-joined by applying two thin wooden dowels within the antler across the break, to reduce strain on the join itself. These dowels were adhered in place with Paraloid B72 adhesive, and the breaks themselves were glued together with the same adhesive. Small to medium gaps in old breaks were filled with a mixture of Paraloid adhesive mixed with glass beads (Larkin and Makridou, 1999). Large gaps were filled with plaster of paris and carefully sanded-down. All gap fillers were painted closely to match the colour of the antlers using artists’ acrylic paints. Old gap fillers – which had been unsightly – were also painted to more closely match the surrounding antler material. Below, a couple of examples are given of before cleaning and after. 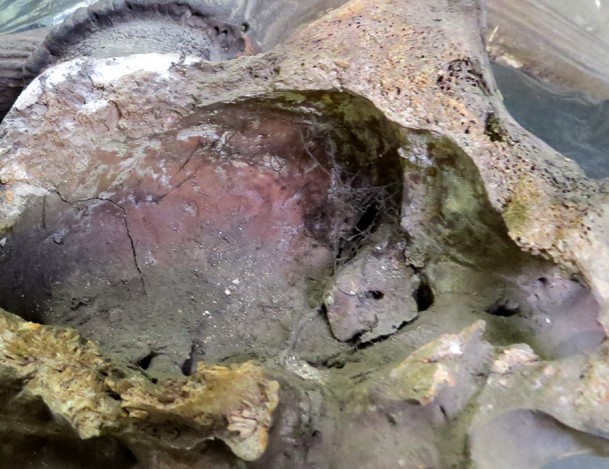 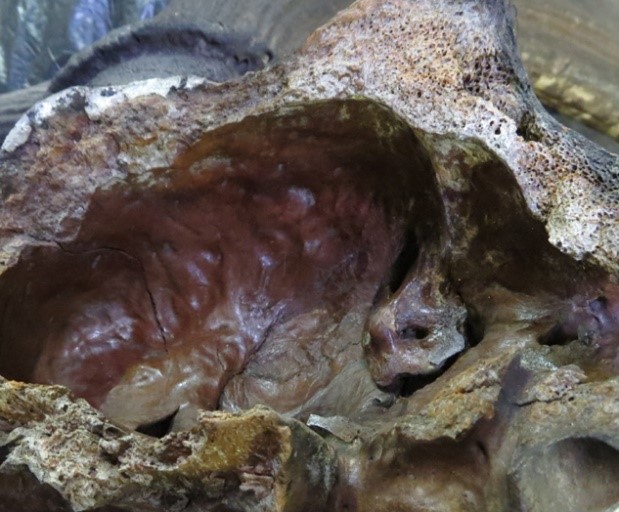 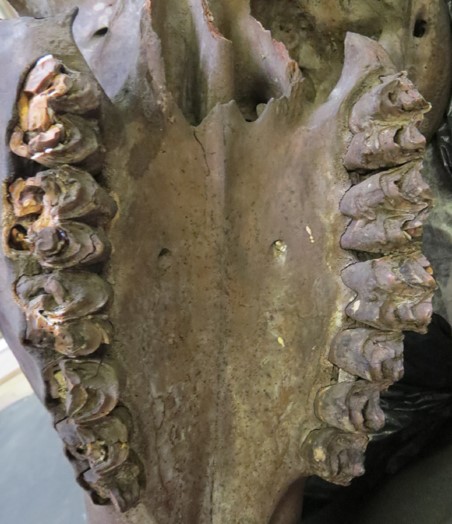 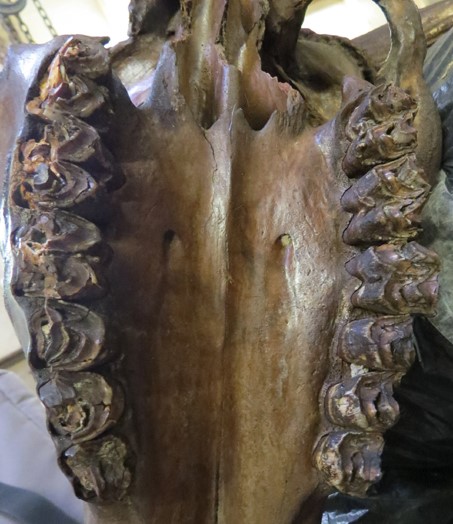 Making the mount. The whole mount is made of steel. The portions made to the shape of the antlers were heated and bent whilst red hot to the shape required. These sections on their own were not strong enough to take the weight of the antlers without sagging and bending so extra supports were required, running diagonally from the base of the upright tube to the distal portions of the antlers. All the pieces were welded together carefully away from the antlers so that the specimen did not get damaged. The metalwork was cleaned up with a flap-disk on an angle grinder and was sprayed with a metal primer and then with black metal paint. The metalwork is lined with inert black Plastazote foam where the antlers and the skull sit on the mount, and the foam is held in place with Paraloid B72 adhesive. The mount is screwed to wooden beams which in turn are screwed to the top of the display cabinet.

Below, the specimen on display on its new mount. 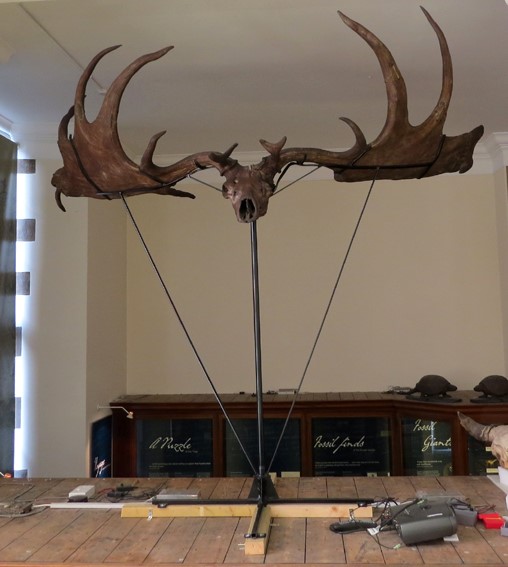