Condition
This was a nice specimen but was suffering a little from lack of attention. It had been on display for a long time. The scruffy and badly damaged woodwork of the frame needed stripping and waxing. The poor paint job on the matrix and the mortar surrounding the specimen had lots of ridges from brush marks, and had traces of old paint. There were lots of holes around the edge of specimen where it met the plaster surround. The gap filler in the specimen was poorly applied and rough, leaving holes. Some thick old glue was dribbled across the specimen in several places.

Treatment
The specimen was cleaned with compressed air and swabs of acetone to reveal details; friable and loose gap fillers were removed with a scalpel; old glue dribbles were carefully removed from the bone with a scalpel; the plaster of Paris surround was sandpapered down to reduce unsightly ridges and remove lumps. Fresh gap-filler was applied (44 micron glass beads in Paraloid B72 consolidant at a 3:1 ratio by weight, where the consolidant is paraloid B72 in acetone at 25% weight:volume). A light coating of Paraloid B72 consolidant at 5% in acetone was applied to the specimen to protect it and enhance the colours in the bone. The gap fillers were painted out with acrylic paints.
Paraloid B72 is a stable, well-tested and most importantly a revesrible methacrylate co-polymer - all materials used in this project are of archival quality and all the materials and processes are reversible.
After protecting the specimen suitably, the wooden frame was carefully stripped with Nitromors to remove its thick layers of white paint and was then sanded down. The holes in the wood were filled and all the wood was waxed with medium oak staining wax, then rubbed down. The plaster surround was painted with ‘Middle Grey’ acrylic paint. The resulting specimen looks much better for the attention it recieved.

Replica
A high quality silicone-wacker mould was taken of the finished, conserved, specimen and museum-quality painted replicas are available, by permission of Dorset County Museum, from Model Specimens.


Large Kimmeridgian ichthyosaur (Opthalmosaurus sp):
This large figured specimen consisting of a series of vertebrae and other bones in matrix was found in 1928 by Dr. Drury and was excavated, by permission of Lady Margaret Hamilton-Russell, by him and Captain G. Fenwick-Owen, in April 1930. From the Kimmeridge Clay, Freshwater Bay, Isle of Purbeck.

Condition
This specimen had also been on display for many years. The scruffy and badly damaged woodwork of the frame (painted white) needed stripping. There were many layers of paint. The matrix and mortar surrounding the specimen both showed traces of old paint at odds with the grey background colour. The gap fillers in the specimen were mostly crumbling and insufficient and needed to be replaced. Much of this filler around the bones was incredibly soft an crumbly (it could be easily removed with a fingernail - it just disintegrated) and some bones were close to falling out - indeed some may already have done so as there were lots of impressions where bone fragments were missing from. In particular some of the last vertebrae in the bottom left corner of the frame appear to be freshly missing.

Treatment
The specimen was cleaned with compressed air and then swabbed with acetone. Some of the filler material was removed and replaced (44 micron glass beads in Paraloid B72 consolidant at a 3:1 ratio by weight, where the consolidant is paraloid B72 in acetone at 25% weight: volume), and some of the better filler was consolidated. Some old and clumsily applied blue/green paint was removed from the grey areas surrounding the specimen with a scalpel or were painted over.
The humerus was lifted out of position so the underside and the matrix underneath could be checked for evidence of pyrite decay. There was none, so the small areas of pyrite decay by-products noticed on the specimen were just small amounts on the surface of the bone and no further deterioration should be expected. The pyrite decay by-products were removed. The matrix was consolidated and the bone adhered back into place. A thin layer of consolidant (paraloid B72 consolidant at 5% in acetone) was applied to all the bones to act as a buffer against future changes in humidity of air in the gallery, and to refresh the colours of the fossil bone. The surrounding matrix and mortar was tidied up, sanded down where necessary, and repainted with acrylic paints.

The frame was stripped of its thick white paint with Nitromors and wire wool, and sanded down. Very stubborn areas needed several applications of stripper, and the acids of the stripper were neutralised with white spirit and vinegar. Holes were filled and sanded, and the frame was treated with “medium oak” wax and rubbed down.

Condition
The main body of the surrounding mortar in which the specimen was embedded was cracked deeply in several places. The paint on this surrounding mortar was cracked and peeling. There were many blobs of green and blue paints on the mortar and the bones. The bones themselves were dusty, grey and occasionally cracked. The filler underneath and around many of the bones was extremely crumbly in places and underneath many of the phalanges was found a very soft whitish-yellowish substance, that seemed to come more from the surrounding (man-made) matrix than the fossilised bone itself. This is possibly the plaster/mortar efflorescing. A hard, grey bitumous material had been used as a gap filler between the larger phalanges and in many instances lay on the surface of the bone as well. Many of these bones were fairly loose, and came away from the underlying mortar quite easily. This revealed further gaps and cracks in the mortar which had not been applied very professionally. The wooden frame was badly damaged, and had been badly painted several times. The specimen was considered unnecessarily heavy and a request had been made to lighten it if at all possible.

Treatment The specimen was cleaned with compressed air, and swabbed lightly with acetone. Lots of blobs of blue and grey paint were removed from the bones with a scalpel. All friable gap filler was removed from below and around the phalanges and replaced with the gap filler described above. One tarsal was particularly loose and this was removed for inspection. It was consolidated, as was the friable mortar below it, and it was replaced and adhered into position with paraloid adhesive. Cracks and gaps were filled, and consolidant was applied to the bones (5%-10% paraloid B72 in acetone) to protect them and bring out their colour.

The grey paintwork of the plaster surround was cracked and in some places had peeled away to reveal blue paint underneath. The paintwork was sanded down and the whole of the surround was painted grey. Some plaster was visible on the proximal end of the humerus. This was removed with citric acid (5% in distilled water), applied with a brush and swabbed away.

The wooden frame was stripped, conserved and waxed (“medium oak”) in the same manner as described above. Once the frame, the specimen and the surrounding mortar had all been fully conserved, a thick silicone wacker rubber was applied to make a mould of the specimen that would securely hold all the bones in place when it was turned over. A layer of Jesmonite acrylic resin with glass fibre cloth was applied to make a rigid jacket to hold the rubber mould in place, and a wooden box was fabricated around the whole specimen and the frame. The box was filled tightly with plastazote foam so that when the lid was screwed down firmly, the whole specimen could be turned upside-down without experiencing any harm.

The wooden base was removed from the rear of the specimen, so that the unnecessarily thick and heavy mortar could be accessed and removed at least in part. This revealed a thick sandy mortar studded with sharp nails sticking out. The mortar included some straw and a few leaves – probably not deliberate, more likely the mortar was mixed outside in the autumn, or the sand was left outside for a while. The mortar also included lumps of older hard mortar set into the fresher mortar, as well as small stones, one brick, and two large pieces of terracotta roofing tiles. Also, bizarrely, some coal. This created some problems when trying to remove the mortar gently with a hammer & chisel (after weakening it with slots cut by an angle grinder), as there was not a homogenous substrate. Rather than being able to chisel away homogenous mortar to the required depth, this inclusion of other material in the mortar led to erratic cracking, especially vertically - to such an extent that in the end all the mortar had to be removed, as it was simply far too fractured and full of flaws to provide a secure enough surround to hold the specimen in place securely.

Once all the old mortar had been removed, the bones were left sitting snugly upside-down in the rubber jacket. After consolidating the bones (their underside, in this instance), acrylic resin (Jesmonite) with glass fibre cloth was used to create a new backing to the specimen, holding the bones firmly in place. The total amount of mortar removed from the rear of the specimen amounted to approximately 130kg. This was replaced by about 35 Kg of Jesmonite acrylic resin, some archival Plastazote foam and wood. Therefore the specimen is now about 95kg lighter than it was, and probably weighs about half of its original weight.

Once a new rear board was attached, the specimen was turned back over the right way up and the protective box structure removed. The protective plastazote foam and the rubber and Jesmonite mould was removed, and the new resin surround of the specimen was inspected, touched up and painted grey (“Middle Grey” acrylic paint).

Replica
The high quality silicone-wacker rubber mould was used to make a Jesmonite acrylic resin replica of the paddle, which was secured into a Victorian-style wooden frame (distressed and treated with “medium oak” wax) and coloured with acrylic paints. This provides a much lighter specimen suitable for wall-mounting or handling sessions in schools.

This mould can be used to make museum-quality painted replicas of the specimen and are available, by permission of Dorset County Museum, from Model Specimens.

The finished specimens on display: 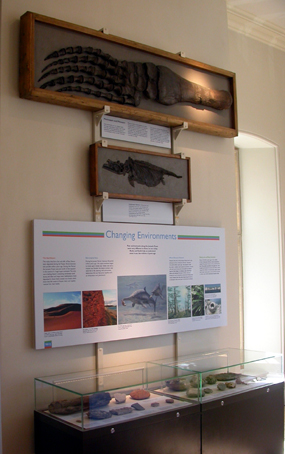 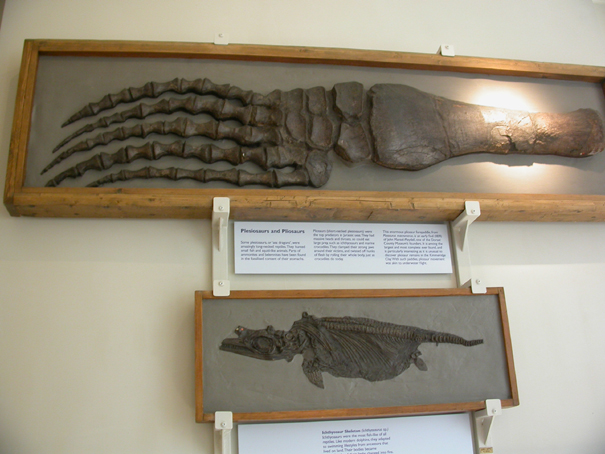 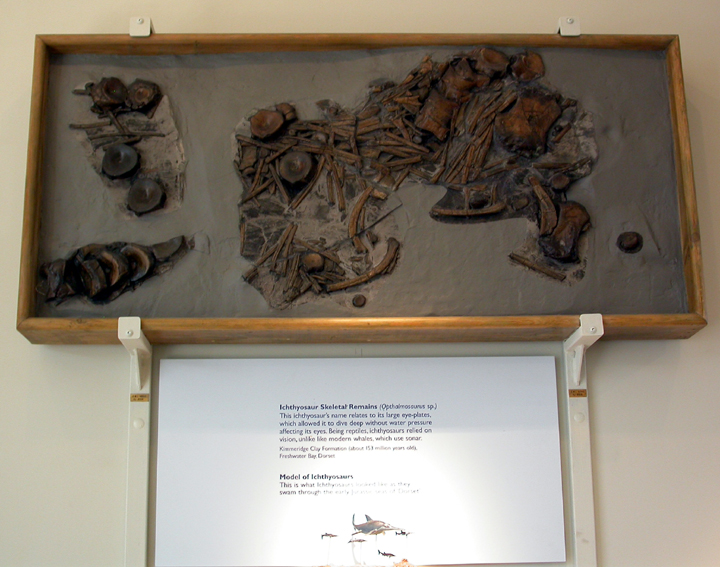 Fish (Dapedius sp):
An almost complete fossil fish from the Lower Lias of Lyme Regis. Approximately 46 cm long by 28 cm wide. Spots of white paint were removed from the fossil with a scalpel and acetone. The rough plaster surround was sanded down, gap-filled (as described above) and repainted with grey acrylic paint. The poorly painted white wooden frame was stripped, repaired and waxed as described above.

A high quality silicone-wacker mould was taken of the conserved specimen and museum-quality painted replicas are available, by permission of Dorset County Museum, from Model Specimens.

Trace fossil (Kulindrichnus):
This trace fossil from Broadbench had a single break consolidated and repaired with Paraloid B72.

Crocodillian (Teleosaurus):
This lovely but incomplete crocodillian lower jaw from Weymouth had several teeth that needed re-adhering. Repaired with Paraloid B72 consolidant, adhesive and gap filler, as described above.