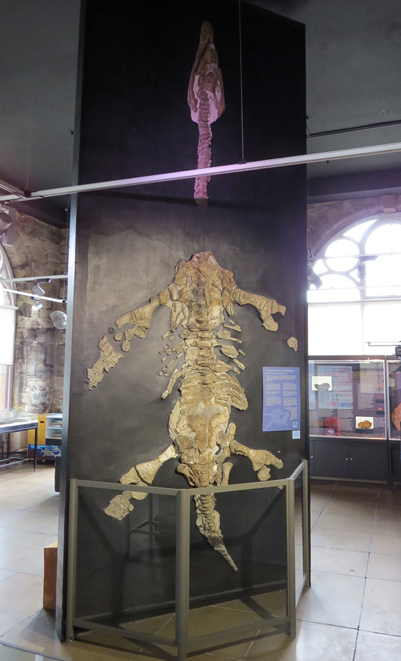 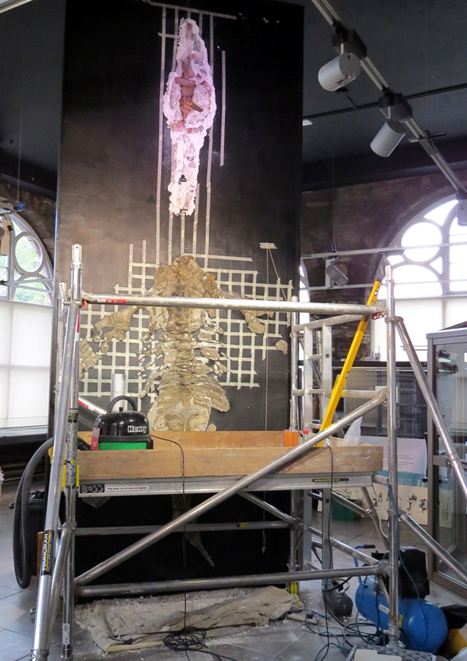 Warwick Museum had to close in 2015 for a major phase of redevelopment. As part of this project, the large plesiosaur skeleton from Wilmcote (left) needed to be taken down and stored off site to keep it safe during the building works. Also, when it returns to the museum it will be redisplayed in a different position. Dismantling such a large, heavy, fragile, old and scientifically important specimen (it is thought to represent a new species) would have to be undertaken very carefully, starting with recording its exact layout.
As displayed, this large heavy and almost complete plesiosaur skeleton is lying on its back ‘belly-up’ in a vertical position with the head at the top. Clearly it was previously set into a ‘coffin-shaped’ wooden frame (using plaster to embed it) but this was itself arranged within a much larger rectangular frame, standing in the middle of the museum. There were gaps and some fresh cracks in the plaster and some pieces were lose but this is to be expected if the original plaster is over 100 years old.
Fortunately, the large heavy specimen did not comprise one single large piece but was in sections, each set into layers of plaster of paris. Wooden blocks, pieces of tile and stones including old Jurassic sediment had been used to wedge portions of the specimen into position at the right height before the plaster was used to set it in place. In addition, the main abdomen blocks (the heaviest pieces) were also held securely in place with metal brackets screwed into the wood of the rear of the frame. These brackets and their screws had rusted in to place, and the screws could not be undone. The brackets had to be bent out of shape to release the blocks.

Dismantling the skeleton: As the specimen is so tall (over 4 meters) a scaffolding tower was used to work on the upper half (right). Before this was installed, detailed photographs were taken of the whole specimen, and close-up photos taken of the lower half. Then close-up photos were taken of the upper sections. After this, a grid was laid out on the surrounding plasterwork using plumb-bobs, spirit levels, tape measures, masking tape and markers (see below). Sections of the skeleton were given numbers, and specific unique numbers were given to bones each side of every old break, as it was expected that the skeleton would come apart along these old breaks and this would record exactly where they joined. More photos were taken to record the layout of the bones relative to one another. Only then could the dismantling begin.
A drill was carefully used to make lots of holes in the plaster of paris adjacent to a piece of the specimen (with a vacuum cleaner held nearby to immediately remove as much plaster dust as possible), then small hammers and chisels were used to remove sections of plaster around each piece until it was free from the enclosing plaster and could simply be removed. Each piece was carefully laid on sheets of acid-free tissue paper that lay on bubble-wrap, in crates that were clearly labelled with the specimen number and part number. Even the largest pieces were not too heavy for a single person to remove and place inside a crate. 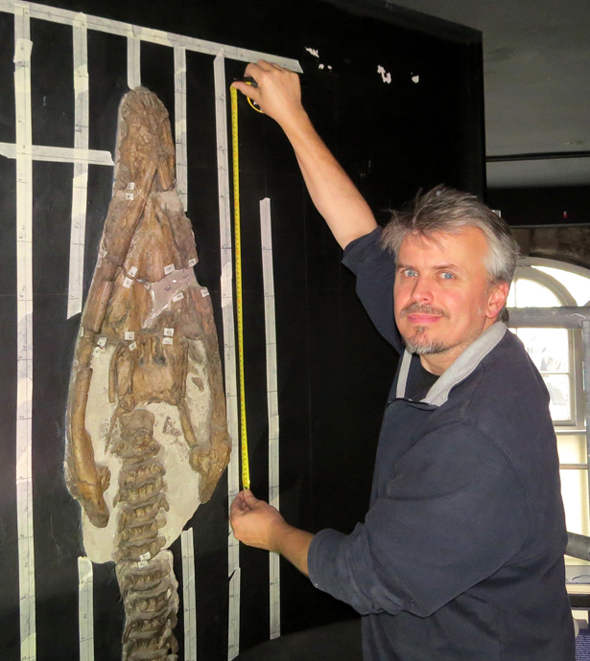 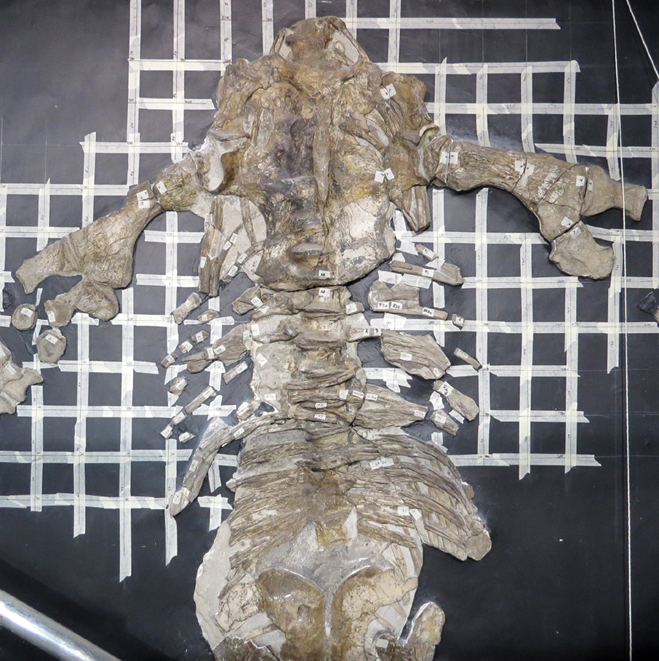 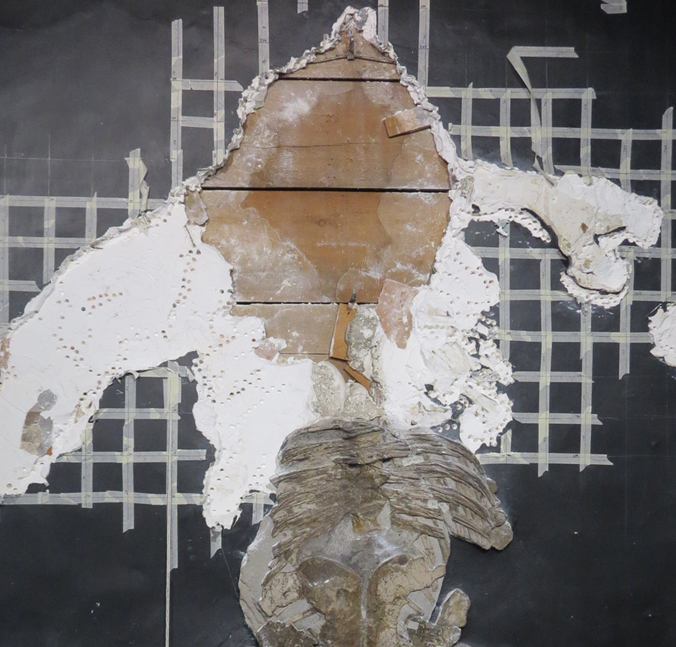 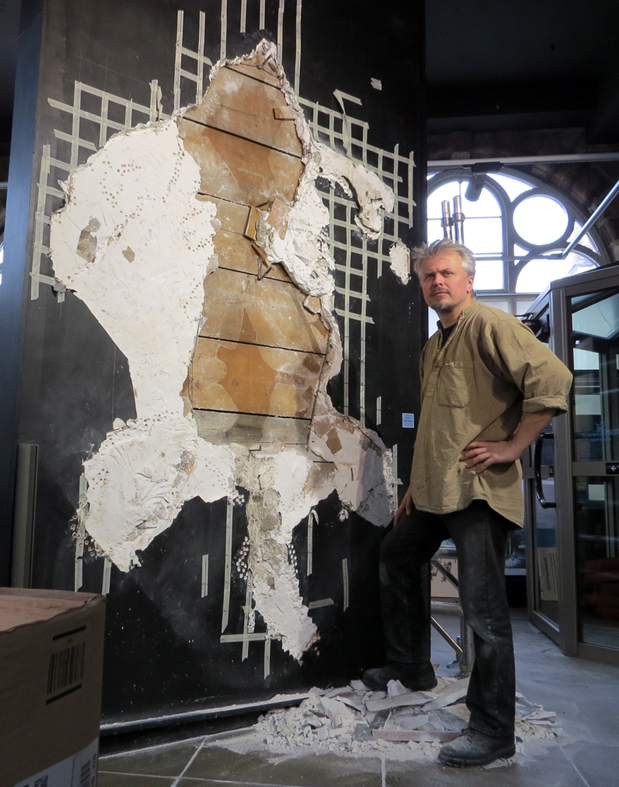 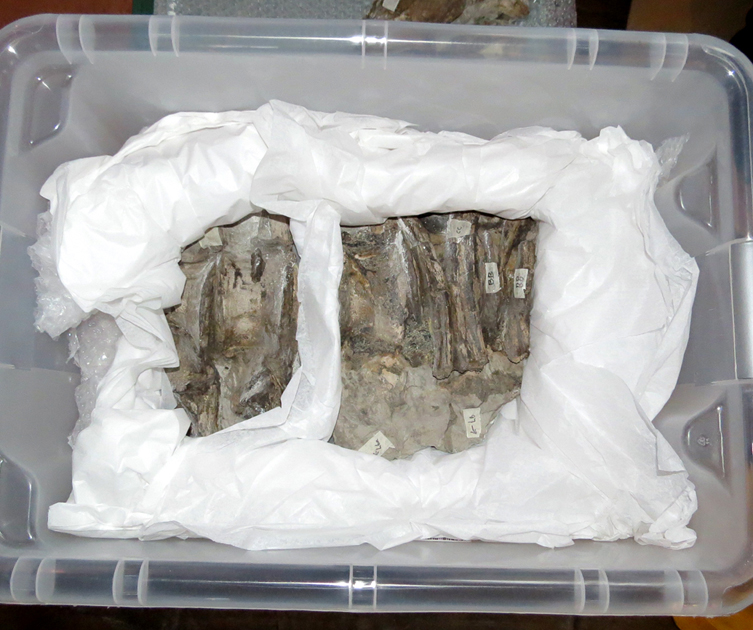 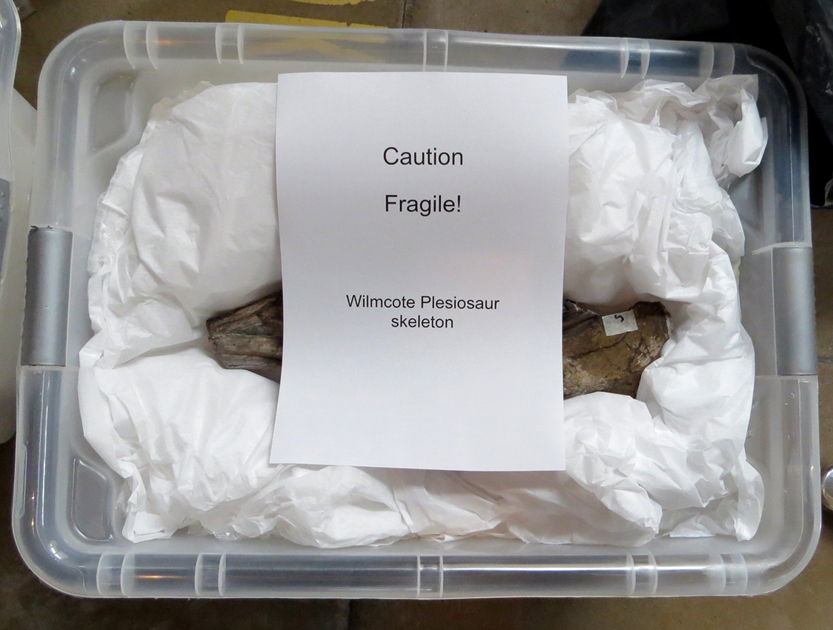 The conservation work now required: In the next phase of work the specimen will need to be thoroughly cleaned; the various ‘tide lines’ of paint will need to be removed (from where the surrounding plaster had been repainted several times over the years); and the old breaks will have to be repaired with reversible materials. The specimen will then be ready for remounting and redisplay.


Cleaning, conserving and preparing the skull: As this specimen is thought to be a new species of plesiosaur, the skull is quite important. Therefore cleaning it for study was a priority. The plaster would have to be removed, and the tide lines of paint and any old varnish and glue would need to be removed too. The side of the skull that had been embedded in plaster for over 100 years had not been photographed or described before so it was particularly important that this was cleaned and studied. However, there was still a lot of original Jurassic rock on this side of the skull and as much of this as possible would have to be removed to enable the study of the bones. This project is described on a separate webpage: http://www.natural-history-conservation.com/wilmcoteplesiosaur.htm