This work was one of many conservation and remounting projects undertaken in 2014 and 2015 as part of the Grant Museum of Zoology’s ‘Bone Idols’ program of work (click on the link for more information about the project). This articulated skeleton of an Indian one-horned rhinoceros was acquired by the museum over 100 years ago, but was not mounted particularly well at the time. The shape of the vertebral column was wrong, the skull was higher than the pelvis rather than vice versa, the two upright supports did not connect with the vertebral rod in a secure fashion and the weight of the skull and mandible pulled the front upright off vertical. Also, the skull did not sit on the front metal rod very well and was secured in place by an unsightly combination of a hook, screw and wire. Therefore the point of remounting the specimen was to: change the spinal column from a straight horizontal line to a more natural and anatomically correct curve; lower the neck and skull relative to the pelvis; have all four feet actually touching the plinth; have the head of each femur articulate with the acetabulum of the pelvis; and to improve the way the skull was held in place so that it did not pull the upright supports off vertical and was under less stress. The skull was not to be in a ‘grazing position’ nor to ‘be leading with the horn’. 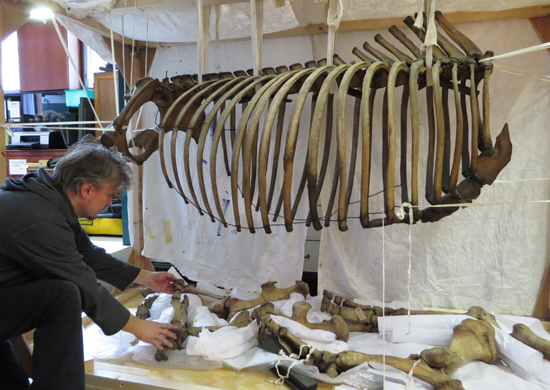 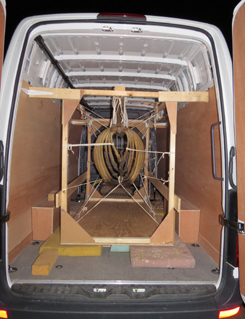 All the work was undertaken by natural history conservator Nigel Larkin, so the skeleton had to be partially dismantled and transported from central London to his conservation workshop in the West Midlands. Taking the specimen apart and preparing it to undergo a long road journey safely was quite a project in itself (see images to left and right), some of which was described by UCL staff here: Dismantling Reg the Rhino in Ten Easy Steps including a time lapse video.

The whole skeleton was dusty and dirty, particularly the horizontal surfaces where dust and dirt had settled. In some places there was chalk or paint on the surface of the bone, and spots of white paint. A portion of the premaxilla had fallen off in the past and needed re-attaching, as did the head of the left femur. 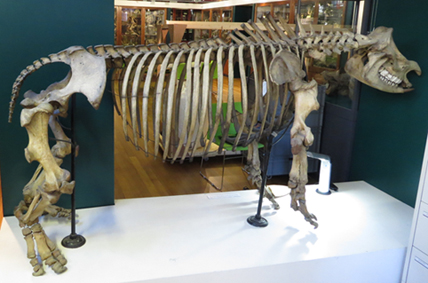 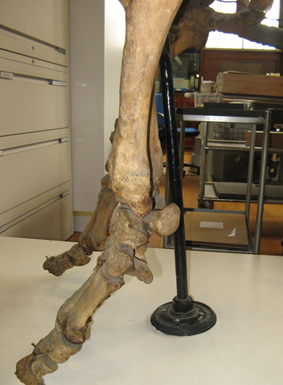 Above: The condition of the specimen before work started. Above left, the skeleton with the neck portion incorrectly higher than the pelvis. Right, the front supporting pole no longer in a vertical position.

Cleaning The whole skeleton required cleaning as it was covered with dust, dirt and some paint and chalk (see images below). The dust and some dirt was removed with a very soft brush used next to the hose of a vacuum cleaner to remove the debris. Then all the bones were cleaned with a gentle conservation detergent, an alcohol ethoxylate (Synperonic A7) in distilled water. It was applied to small areas at a time with a soft brush, then wiped away immediately with a lint-free paper towel. Then the area was cleaned again with clean water (with no detergent) and immediately dried again with a paper towel. 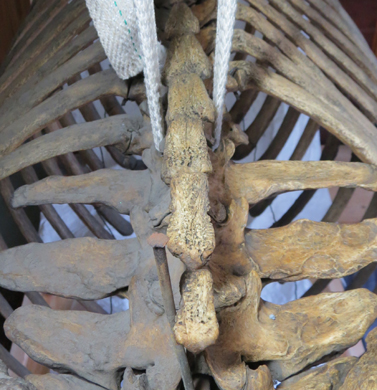 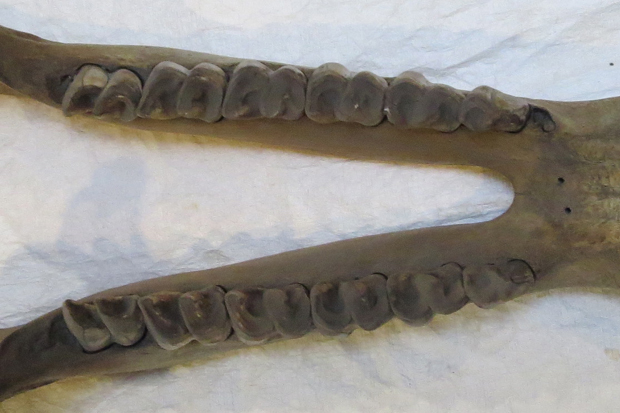 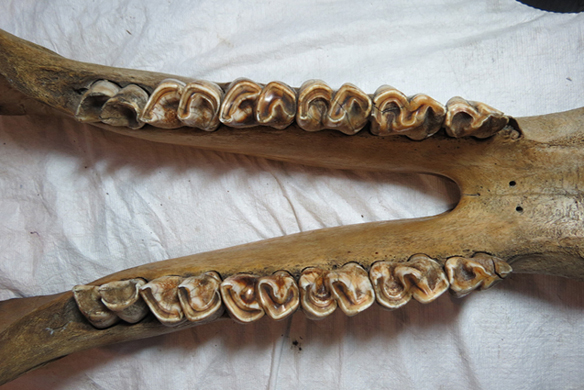 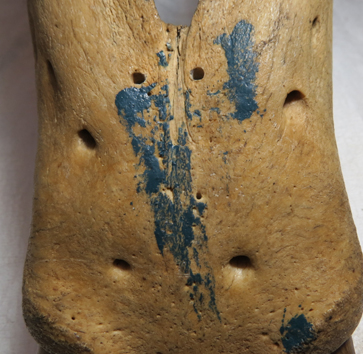 Above far left: The neural spines and the transverse processes on the right of these vertebrae have been cleaned, highlighting how dirty and dusty they still are on the left side of the vertebrae. Above left: The teeth and bone of the mandible before cleaning. Above right, the same teeth and bone after cleaning. Above far right: Paint on the underside of the mandible.

It is amazing what you can find when cleaning. Not only were remains of plants found in the cavities and cracks of the teeth from the rhino's last meal (these were photographed and left in place for future study) but some clusters of insect coccoons were found in the nasal cavities. These were identified as 'rhino bot fly' – a rare parasite of live rhinos. See the Grant Museum's page 'The Return of the Rhino: Conserving our biggest skeleton'. 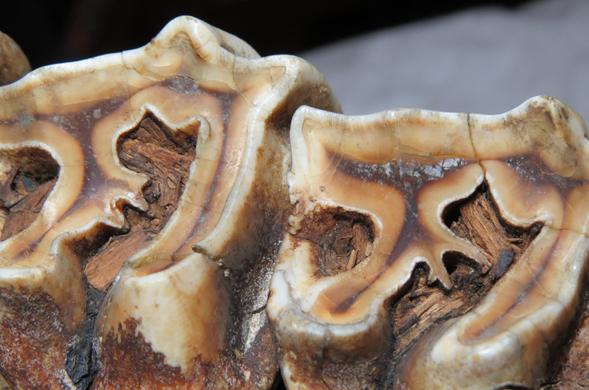 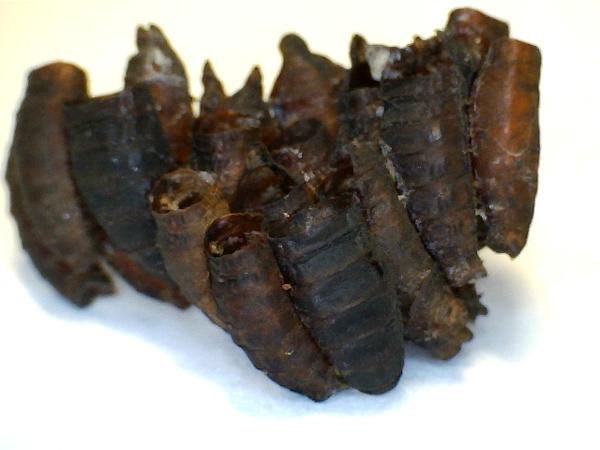 Above left: Some remains of vegetation still stuck within the teeth of the rhino. Above right: some of the botfly larvae casts from the nasal cavity (photo copyright UCL Grant Museum of Zoology). 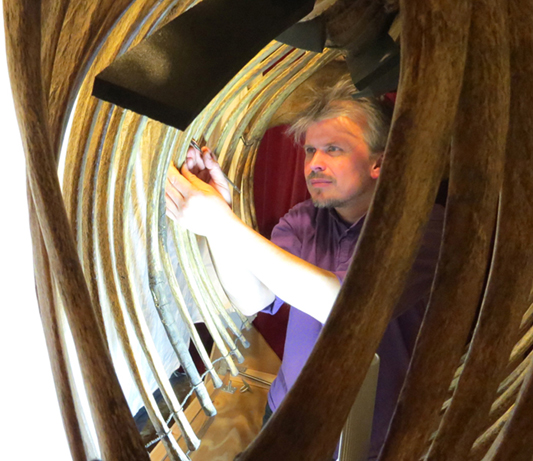 Repairs The sternum had been modelled at some point in the past using some kind of putty or resin mixed with fibres that may be hair. This has cracked extensively over the years and some small pieces had fallen off. All the modelled material was consolidated (with Paraloid B72 in acetone) to strengthen it and to give a good surface for the repairs to adhere to. Plaster of Paris was used to fill the worst cracks and model-in missing pieces. This was cleaned with a small amount of dilute citric acid in water, then the plaster was painted with artists’ acrylic paints. The head of the left femur was also rejoined to the shaft of the bone from which it had become separated and broken pieces were rejoined to the premaxilla of the skull, all with the conservation adhesive Paraloid B72.

Remounting The spinal column of the original mount was dead straight and needed to be changed to a more natural curved shape. However, the metal rod running through the vertebrae could not be removed and therefore the back remains straight. It seems that the vertebrae were adhered to the rod somehow. This affected all other plans to change the mount. It was intended that the two vertical upright supports would have a secure connection to the new curved metal rod that would run through the vertebrae meaning a sturdier and more reliable mount that would ensure the weight of all the vertebrae and ribs were not taken by bones but by the metal support. It would also have stopped the uprights being pulled off the vertical by the weight of the skull as they would have been securely attached and unable to move. Instead, the two upright metal supports were adapted:
The rear upright pole used to simply sit under the sacrum, with the weight of the rear vertebrae and ribs being taken by this small area of bone sitting directly on the metal pole. To reduce this stress on the specimen a curved bracket was made on the forge to fit under the sacrum to spread the weight over a larger area in a more sympathetic way, with inert Plastazote foam between the new metal bracket and the bone. This was welded to a section of metal tube so that it could simply sit over top of the metal pole and has some ability to be adjusted, as it can swivel into the best fit position. This also raised the pelvis by a few cm which was desirable as the pelvis was to be higher than the head and neck. However, there was a limit to how much higher the pelvis could go as the head of each femur needed to connect with the acetabulum of the pelvis. The rods holding the rear limbs in place were adjusted so that each femur articulated properly with the acetabulum whilst the feet remained on the plinth. However, old cracks were noted where these rods connected with the vertical support so these needed to be re-welded and made more secure.
The front upright support required quite a bit of work. The base of the neck and the skull were far too high relative to the pelvis and this had to be adjusted. This was achieved by removing a section of the lower portion of the metal support, dropping the height by 20cm (the pelvis was also raised by about 3cm, meaning that the front is now 23cm lower than it was in relation to the rear of the skeleton). This meant that the rods holding the front limbs in place had to be removed and new rods were welded in place and shaped to hold the limbs in their new positions. The front section of this support that held the cervical vertebrae and the skull had to be changed quite dramatically on a forge to lower the neck and skull into the position agreed, with the skull lower than the pelvis but not ‘leading with the horn’.
The problem with the skull is that the brain cavity is quite small and short, so the metal rod can only insert a relatively short distance into the back of the skull whereas the centre of gravity is much further forward. That means that even if held in place with a screw, hook and/or wire etc, it will always be under stress, wanting to drop forwards. The substantial weight of the skull also means that it would be constantly pulling the front upright forwards, placing stress on the rest of the skeleton. This would have been less of a problem if we had been able to remove the original vertebral rod and replace it with a longer one with secure connections to the rest of the metalwork but this could not be done. The solution was to make a new vertical upright support that would sit directly underneath the skull and take its weight from below. This would mean that the skull was a lot more securely held, was not under any internal stress, and did not place stress on the rest of the skeleton or metalwork. A metal rod of an almost identical thickness to the original two uprights was found as well as a floor plate that was the best match with the original two with which to secure the new upright rod to the plinth and the two were welded together. All the old paint on the metalwork – which was rusty and flaking in places – was removed, and then the metalwork was painted a similar glossy black colour with an aerosol spray. 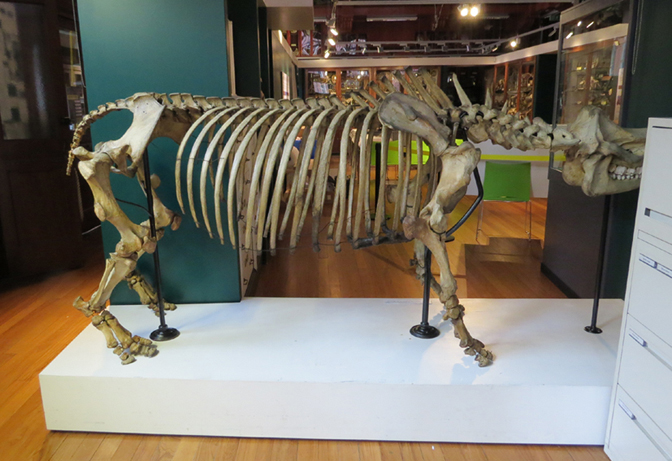 Above, the rhino skeleton installed after cleaning, conservation and remounting.

Synperonic A7 : an alcohol ethoxylate that has recently replaced ‘Synperonic N’, a mild non-ionic detergent that had been widely used by conservators in museums for decades to clean osteological specimens and other material. It can be used as a detergent, wetting agent, non-ionic surfactant, and an emulsifying and dispersing agent.
Paraloid B72 adhesive: used on breaks only.
Paraloid B72 in acetone as consolidant: used on breaks and the modelled sternum.
Plaster of Paris: used to fill gaps in the modelled sternum.
Citric acid: used to clean plaster of paris from the sternum during repair.
Artists acrylic paints : used to paint out the plaster used on the sternum.
Plastazote foam: low density, closed cell, cross-linked polyethylene foam of archival quality. Used between the sacrum and the rear upright bracket, and around the wooden block under the skull.