Natural-History-Conservation.com
In October 2006, Simon Moore undertook a conservation survey of the natural history specimens at the Stewart Museum, Pocklington.
Specimens conserved in situ:

Mongoose (A) 127: The left front foot pads were cracked and the phalangeal bones disjointed, composition crumbling. They were glued and gap-filled with neutral pH PVA and acid-free tissue māché in 18 parts. The nose, mouth and eyelids were dressed with Bollmann compound to prevent further drying out.

The specimens were mounted on iron wires and wrapped around with black adhesive tape. One wing was detached in the case and severely grazed by silverfish. Other specimens varied in condition from poor to fair but all have some wing damage – splitting and/or slight grazing, a few with gaps or delaminated borders. Some had lost part of their original iridescence. Antennae: some are still intact, a few detached (for re-assembly) but many are lost.

Treatment The specimens were supported individually on tissue pillows. Wings were patched and repaired (ventrally) using Gampi 8gsm Japanese tissue strips, glued into place using 50% n-pH PVA. Once dry, other areas of wing were treated in like fashion. Detached wings were glued back into place binding the wing corner with Japanese tissue as an adhesive bridge between the dust-dry body and the wing itself. Detached antennae were glued into place using the same technique.

Nurse shark head SCM: CONS 2006.0291
The skin of this shark was cracking and starting to lift in many areas, and the underlying plaster was flaking and powdering. The skin was lifting around the shield mount and there were numerous cracks, eruptions and abrasions elsewhere to the skin and underlying surfaces. Surface eruptions were often extreme due to hasty plastering of original mount. Some teeth were loose, two detached. The upper maxillary-pterygoid cartilages had dried out and delaminated from the proto-maxillary leaving gaps, and the same with the lower jaw. The cartilages were dry and fibrous along edges and around the mandibular junctions.


Blue shark head SCM: CONS 2006.0290
The skin was cracking and starting to lift in many areas, and the underlying plaster flaking and powdering. The skin and paintwork was lifting, especially under chin, also around shield mount. Numerous cracks, eruptions and abrasions elsewhere to skin and underlying surfaces. Many lifting areas to paint work and one large area of cracked open plasterwork on head. 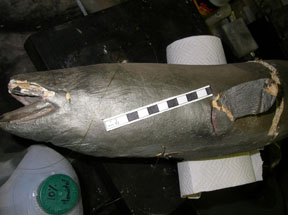 Freshwater Conger (family) Eel SCM: CONS 2006.0296
The eel body was broken in several places following a fall whilst on display. the reason for this can be attributed to the rather too fine nylon monofilament suspending it! 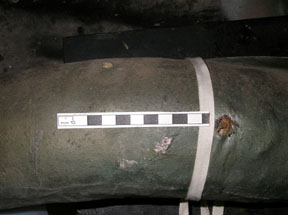 The specimen was partly wrapped with parcel paper tape to reinforce the lower area of body fin so that the monofilament suspension would not tear it.
The main body fin has sustained severe damage and part is missing, the caudal fin is in slightly better condition despite some cracking and delamination.
The head has also sustained damage to the mouth edges on both sides. The pelvic area break is the most serious with wood-wool stuffing emerging from the body and numerous skin tears. 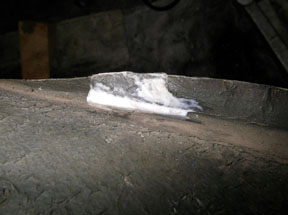 Areas of flaking and powdery plasterwork were consolidated with 10% paraloid B72 in acetone.
The two major cracks (neck and pelvic areas) were repaired using epoxy paste in 2-3 layers. The problem of supporting an object that can twist in 3 different directions simultaneously necessitated this type of repair at these junctions of the body.
During curing, the paste was textured using dimpled tissue.
The mouth plaster was rebuilt with epoxy paste where plaster had cracked away and been lost. 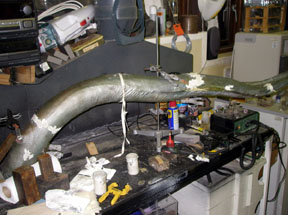 
Puku head SCM: CONS 2006.0271
The fur was dust-soiled and the ear tips opening and old filler (still intact) and wire armature exposed. Eyes and horns were dust-stained and rather dry. Some field-mounting slippage was observed under the eyes – regrettably quite normal for field-mounted specimens of this age.


Impala head SCM: CONS 2006.0270
The fur was dust-soiled, the ear tips opening and old filler (still intact) and wire armature exposed. The left ear tips were detached, and the eyes and horns dust-stained and rather dry.

It is highly advisable to remount all the head on shields. The present staples and mirror plates would have been attached as temporary means of suspension and the strain caused, over the years, would have contributed to the cracking, especially to the larger heads such as the rhinoceros.
Shields can be obtained from Snowdonia taxidermy supplies and I would inform them of the heads (size) that are to be attached so that the correct sizes and thickness of wood are ordered.

The shields are attached to the wooden backs of the head boards, avoiding the labels if possible, using screws and the backs of the shields should have a keyhole recess to hang the head mount.