Berge knives were named after their inventor, a Parisian cutler called Berge. Hardly anything is known about him, alas, except that he designed a twin bladed pocked knife with a steel blade that doubled with a fruit-cutting blade of silver or gold. These were evidently popular with well-heeled Parisians particularly in the pre-revolution era of French history as many still exist and are very collectable. There is no spring and each blade backs onto the other so that only one blade can be fully opened at any time. 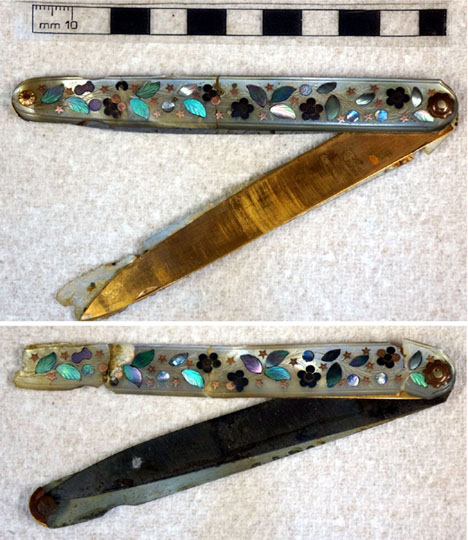 Condition: This particular knife with gold and silver blades was likely made c.1770, with scales (that form the handle) of nacre (mother-of-pearl) and inlaid with low-grade gold stars and flowers, also small leaf-shapes and roundels of grey lip pearl oyster and brighter abalone shell. One scale was backed onto a supporting web of cupro-nickel alloy, the other had no support at all and had consequently broken in several places. Moreover a former owner had glued the pieces of broken scale to the gold blade so that it couldn’t be fully opened! A piece of the scale glued to the gold blade was also missing and had been replaced by an area of hard resin (See image to the left, showing the knife as received with the gold blade quarter open (upper image) and the steel blade also open (lower image) and the nacre scale attached (glued) to the gold blade).

Treatment: The knife was disassembled in acetone and the scale fragments cleaned. The old rivets were removed by careful drilling so as not to damage the copper or gold rosettes (rivet covers). The scales were mounted onto fine Gampi Japanese tissue using PVA adhesive to give them more support before mounting onto a new web (see below).

Above: Joining the edges of the fragile nacre together by backing onto 10 gsm (fine) Gampi Japanese tissue with PVA neutral adhesive. 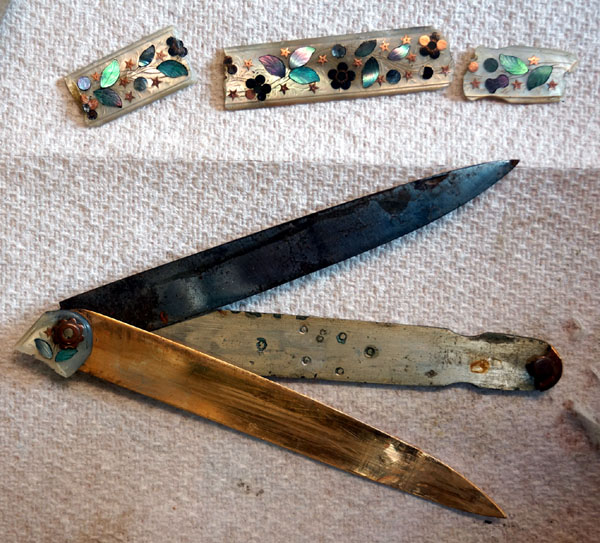 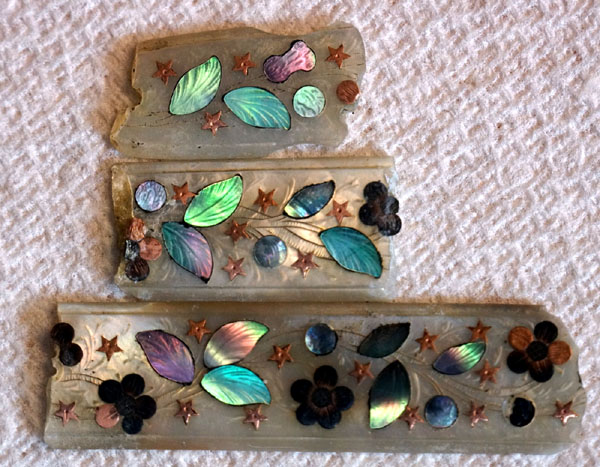 Above: Once the scale fragments had been removed the gold blade tip was straightened out carefully: the left shows the knife half open and showing the existing cupro-nickel web in place. Note that the large copper content of some of the low-grade gold flowers has caused them to darken via oxidation.

New roundel of grey lip pearl added to scale (to right) and the cupro-gold flowers have been polished.

A new web (scale underlay support) was made by grinding a length of carbon steel to a width of 0.5mm, quite difficult as the surface had to be maintained as evenly as possible. The new web was then carefully filed to shape and the scale fragments were mounted on it using araldite as it blended well with the nacre. A small piece of similarly-coloured nacre was also cut and shaped, to replace the missing piece from the end of the knife, and similarly glued in place.

A missing gold rosette was created from a piece of gold wire; it was hammered into a rough circle and then ‘crinkled’, using cutters and filed and drilled to form a decorative rosette.

The knife was then reconstructed by riveting both ends back together with 1.5mm gold wire, the rivets slightly domed by hand. The missing inlay roundels were then added, which had been supplied by a friend. These were already cut to the right diameter but were too thick. The thickness was reduced by laying them on their sides and applying pressure, using a scalpel, until the layers delaminated under pressure. This had to be done in a box so that the parts didn’t fly across the room and get lost! They were then ground to the exact thickness on fine emery paper and glued into place. The whole knife was polished using very fine ‘crocus’ paper. 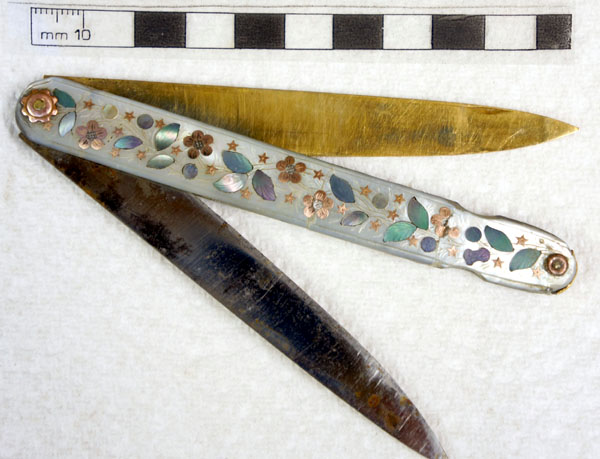 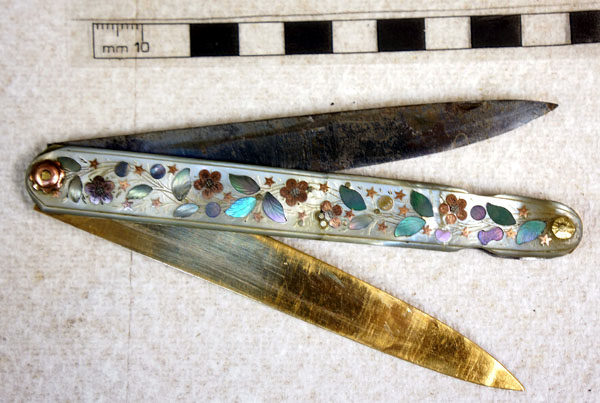