Every September for the four years 1995 to 1998 Nigel was, at the request of Professor Stringer of The Natural History Museum (London), responsible for a large three-week excavation studying Neanderthal occupation layers in Pleistocene cave deposits in Gibraltar. This was to attempt to date the transition from Neanderthal to modern human occupation of the caves and to compare the ways in which the two different peoples had lived there. The excavation team consisted mostly of staff from the Natural History Museum and Oxford Brookes University, with a team of local archaeologists from Gibraltar and Spain, and additional experts from other countries around the world. The two caves being excavated during the four field seasons were at the bottom of a 180-foot sea cliff, with no access possible from the sea, making logistics a little more difficult than they might have been. 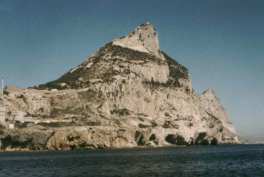 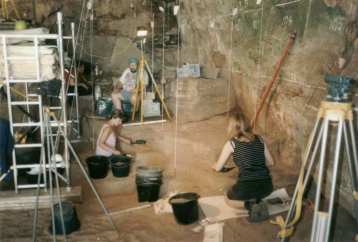 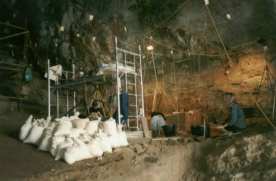 During the dig there were up to 35 workers at any one time, divided between the two caves, with numbers fluctuating daily as different specialists, each with unique requirements, arrived and departed. 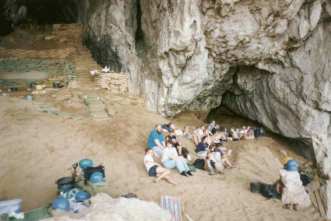 Lunch break at Vanguard Cave – note the sand bags and equipment stretching to the back on the left.