The cleaning, conservation and dismantling of a 70 foot long Finback Whale skeleton in Cambridge, England

It’s not every day that I get asked to consider taking on a specimen as big as a 70 foot-long articulated Finback Whale skeleton. For instance next week I’ll be cleaning, conserving and remounting a mole skeleton a few inches long, then a porpoise skeleton about 3 feet long. Last week I was conserving, repairing and remounting a five-foot long ichthyosaur skeleton and that was big enough (see: http://www.natural-history-conservation.com/norfolkichthyosaur.htm). Those are fairly normal weeks for me. But size, as they say, isn’t everything. There were also several other interesting aspects to the Finback Whale project. Not only is this particular whale skeleton apparently the largest example known of its species which is the second largest species of any animal alive on the planet today (second only to the Blue Whale) but it is an iconic landmark in Cambridge city centre and therefore was well loved and was on the regular tourist trail of quirky things you must see when in town (so it is of great local interest). The skeleton is also about 150 years old (therefore it is fragile) and the animal was a celebrity in its day (meaning it is historically important) as it made newspaper headlines around the country when thousands of people visited it when it was washed up on a beach in Sussex in 1865. In fact 40,000 people are estimated to have made the trip to view it on the beach during the first few days of its stranding – so many that a new railway station was specifically built as near to the beached animal as possible. For more information about the animal’s life and death, see:
http://www.museum.zoo.cam.ac.uk/collections.archives/collections/recent.vertebrates/finback.whale/ 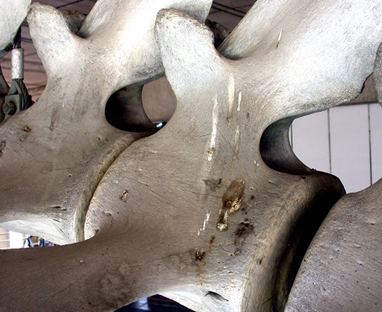 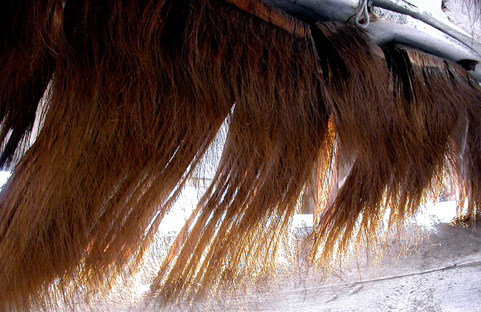 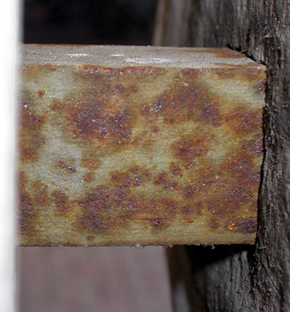 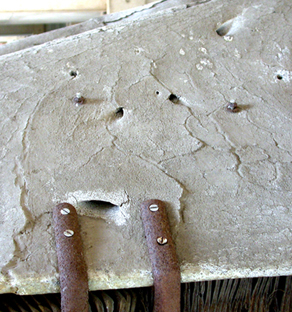 Above, details of the specimen.
However, not only is this one of the largest skeletons you’ll ever see (bigger than most dinosaurs!), and an icon of the city with historic associations, its current display situation was quite unique as well: for the last 17 years it had been hanging suspended outside Cambridge University’s Museum of Zoology, enticing visitors in to see the rest of the collection (comprising about 4 million specimens). This did mean, however, that many generations of pigeons had bred, hatched, lived and died on and within the specimen. Open to the elements, some of the metalwork was rusty but the specimen looked sound, as well as impressively large. So, when I was asked to assess the specimen’s condition and to provide some ideas as to how it might be safely dismantled, cleaned and temporarily stored for the duration of the current refurbishment project before re-mounting in the new foyer, was I daunted? Well, no. I love a challenge. And it wasn’t going to be a particularly novel task. It’s fair to say that I don’t normally have to remove quite such large amounts of bird droppings from the skeletons I usually work on, but the processes required for the project as a whole would just be scaled-up versions of many other projects I had undertaken over the years. In fact it would be very similar to a project I had organised in 2009, when responsible for excavating and lifting a fragile 6,000 year old whale skeleton almost identical in size but buried in sandy sediments in Abu Dhabi (you can read about that expedition here: http://www.natural-history-conservation.com/adwhaleskull.htm. Many of the techniques used in that project would clearly come in useful. 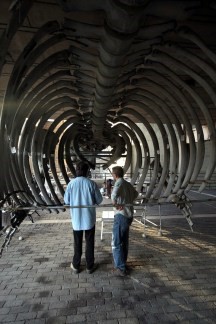 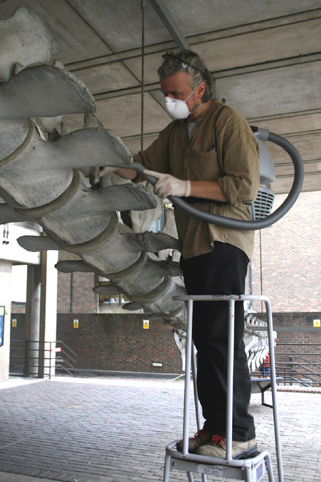 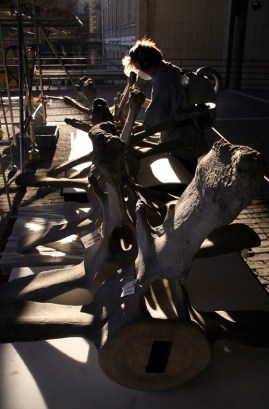 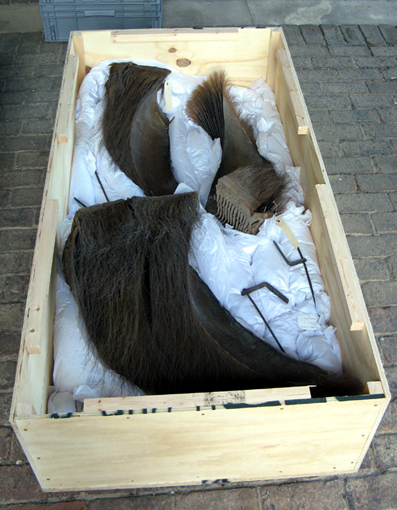 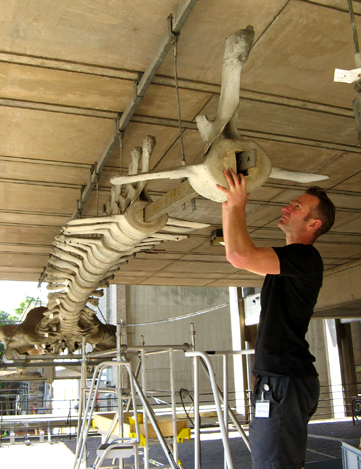 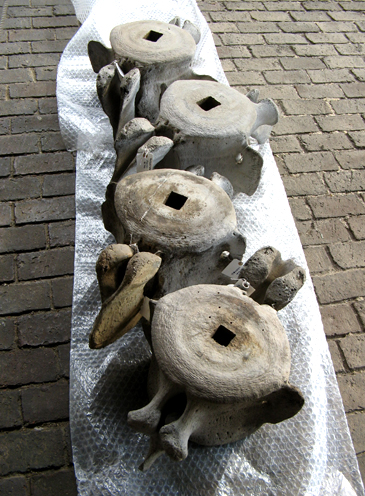 The first thing I had to do was to assess the state of the bones, and assess their supporting metalwork and all the baleen hanging from the skull (the baleen is the keratinous material in the mouth that the animal used to filter-feed when alive).They had to be studied and their status recorded in some detail as the condition of all of these elements would determine exactly how I would tackle the project. This enabled me to devise an appropriate plan of action for cleaning the bones, the baleen and the metalwork, and to make a written and photographic record of every element (as we will have to put it all back together again in a few years!). I also had to plan how to label and dismantle it all and pack it away for storage for a few years. Access to the bones was going to be a problem, as many of them were a couple of metres or more in the air, and the pigeon droppings were actually quite a significant biohazard risk. But appropriate scaffolding and scaffolding towers could be sourced and we devised risk assessments for every possible activity and took appropriate precautions. One of the main elements of the assessment phase was to figure out exactly what tools and materials we would need and in what quantities. I also had to work out how long it would all take and ultimately how much it would probably cost so that funding could be allocated appropriately.

Work started in September 2013 (see time lapse video below). After recording exactly how the skeleton was put together on the supporting metalwork, every single bone was cleaned very carefully before being removed, using brushes and a vacuum cleaner to remove as much dirt and pigeon faeces as possible (whilst wearing disposable gloves, dust masks and goggles. It was photographed and labelled with its individual bone number and its orientation before being removed from the metalwork. All the metalwork was photographed and labelled as well. Only then was the bone very carefully removed and the next stage of cleaning undertaken. The bones were swabbed with Synperonic A7 (a special detergent used in museums) diluted with water, one small area at a time, and patted dry with lint-free paper towels. Then to clean the detergent off this small area would be swabbed with water, dried, then swabbed with water and dried again. All metalwork was removed and cleaned with a spinning wire brush, then painted with ‘direct to rust’ metal paint.

The bones were packed way in standard museum ‘archival media’ (inert storage products that last for decades and don’t damage the specimens by giving off harmful chemicals) such as acid-free tissue paper and Plastazote foam. We had to build bespoke wooden crates for the baleen to be stored in and make large shelving units for the largest bones to be stored on (the ribs alone are about 6 feet long). In the end we undertook the whole project just within the time I judged it might take (about 60 person days) and well within budget (I’m not going to tell you). And not a single item was damaged in the process, despite the bones being very fragile, large and awkward, despite a single element of the metal supporting structure weighing about 170 kilos (we used pulleys to lower it) and despite having to move the skull and lower jaw which weighed a ton and half. This latter task was even more difficult than you might initially think: the 5 metre-long skull and lower jaw (like all the bones) were hanging from the ceiling and we had to transfer the weight carefully, slowly and evenly so that it was supported from below instead, yet the skull was extremely brittle as well as astonishingly heavy. We built a rigid, strong, supportive and protective metal cage around it so that we could manoeuvre it from its original position and into a nearby purpose-built shed with a crane. 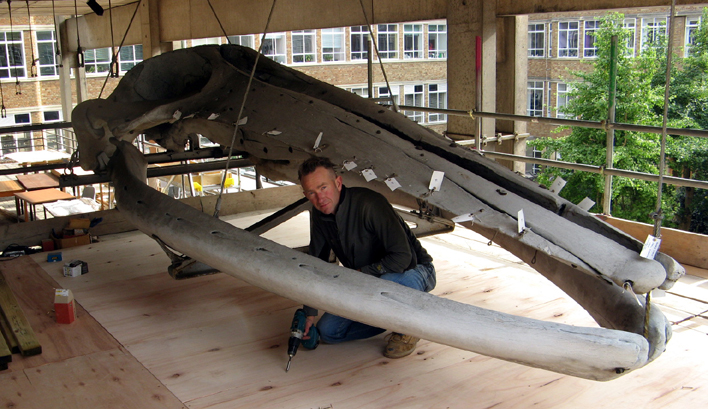 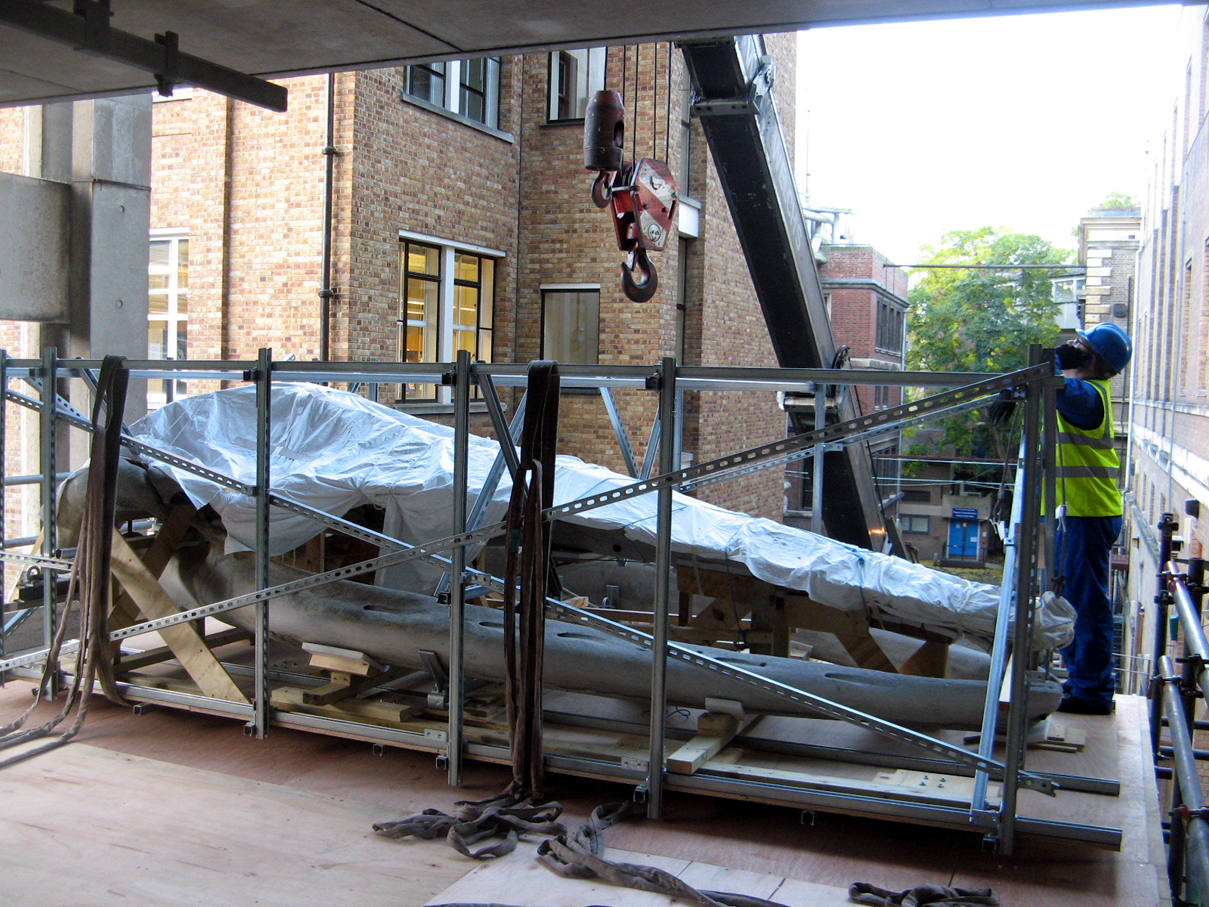 The time lapse video of the project:


Matt Lowe, the Museum’s very efficient Collections Manager, has written a blog of how the project went from his perspective. You can read it here: http://camunivmuseums.wordpress.com/2014/02/06/a-whales-tail/.

None of this could have been achieved safely or within time or budget without help from the multi-talented Phil Rye, the ever-resourceful Matt Lowe and a bunch of brilliant and amazingly stoical volunteers, particularly Ilanith Pongolini. Cleaning and packing up this iconic specimen was just the start of a truly gargantuan project. This might be a particularly large and problematic individual skeleton, but it is just one of many museum objects with special needs: another 4 million specimens will be assessed, cleaned, recorded and packed over the next year, ready to be moved in to their new stores (you can see some examples below). A small army of staff and volunteers are beavering away behind the scenes every day. The museum may be closed for a couple of years but it is a hive of activity. To read more about the project or watch videos, select from the following:

A year and a half after the project described above, we had to move the 2.5 tonne skull into the new foyer area before the walls were built, as it would have been too big to get into the building after construction of the walls. You can read about that project here: Moving the skull again!.

The Zoology Museum project in the news:

Working on other whale skeletons in the Zoology Museum:
http://www.natural-history-conservation.com/whalingatheight.htm .

Something else a little awkward to clean and pack: A stuffed orang-utan sitting in a fragile nest of twigs leaves:
http://www.natural-history-conservation.com/orangutan.htm.