The conservation and preparation of fossil Miocene elephant specimens from Umm al-Ishtan, for the Abu Dhabi Islands Archaeological Survey, April 2006. 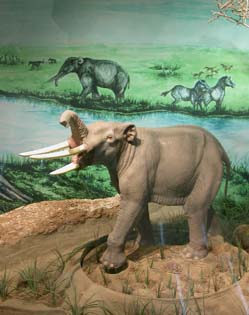 Three large fossil elephant bones - a femur, tibia and partial pelvis - recently excavated from the Umm al-Ishtan site in western Abu Dhabi were conserved and prepared for research and display between the 15th and 23rd of April 2006 by Nigel Larkin and Phil Rye. All three bones are thought to be from a Gomphothere, Stegotetrabelodon syrticus, and possibly represent a partial skeleton. The materials used are described in detail at the end of this report, and the details of suppliers are given. 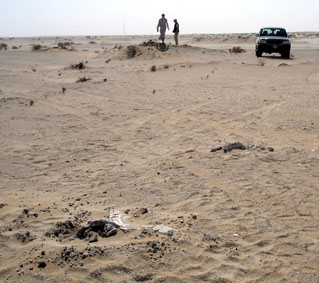 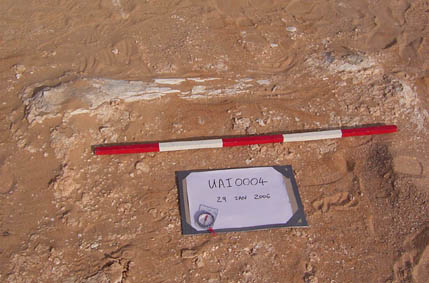 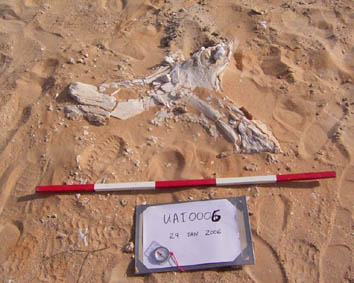 All three bones had been excavated recently (February 2006). The bones along with some surrounding sediment had been jacketed securely in-situ in the field ready for transport using plaster of Paris and scrim bandage and splinted with wood. These protective jackets were very well made, despite the relatively poor quality plaster available. The plaster jackets were relatively easy to remove with an angle grinder, saw, knife and pliers if dampened with water beforehand - preferably soaked overnight and wrapped in plastic to prevent rapid drying out. The angle grinder can create a lot of plaster dust when doing this, so a vacuum cleaner was held against the angle grinder to take all the dust away as soon as it was formed, to prevent the dust settling on the bone. Citric acid (approximately 5% - 10% in distilled water) was used to dissolve the occasional spot of plaster that had dripped on to the bone during excavation and jacketing. The bones were labelled with their field numbers and northerly orientation (written on the jackets in the field) as soon as sufficient space on the bone had been uncovered and cleaned. Permanent marker was used to write on thin strips of paper that were then glued to the bone with Paraloid B72 adhesive (see below for product details). 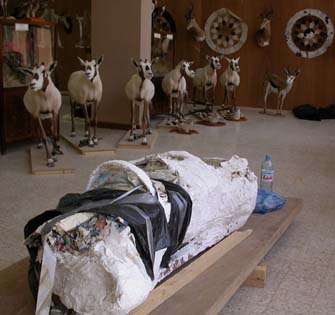 All three bones had a considerable amount of hard concreted sediment adhering to them. Loose material was removed easily, and acetone pippetted on to the remaining matrix aided the removal of some further material. The most stubborn matrix had to be removed gently with a hammer and chisel, in particular the very hard concreted material that was stuck fast to the articulation surfaces of the tibia. 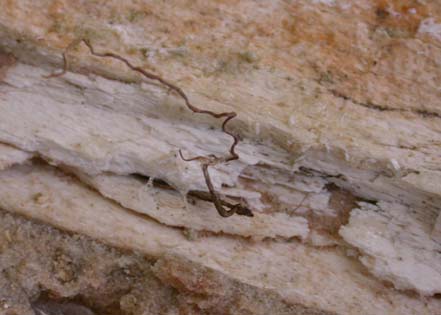 In one major exception to this, about two thirds of the way down the tibia (distally) some large selenite crystals had formed a cluster that ran perpendicular to the bone, to a depth of about 30mm into the bone, and were approximately 40-50mm across. This created a deep pit in the surface of the bone when the crystals were removed. Further damage had been inflicted on the bone more recently by plants whose roots had worked their way into the bone through cracks, then grown and forced the bone to split further long these cracks.

Some small bones were found in the sediment within the jackets surrounding the femur and the tibia. These appeared to be mostly fish bones, plus a fragment of a shaft of a long bone of a medium side mammal (deer metatarsal size). Also, what are though to be trace fossils of infilled burrows were found.

Compared to most of the other bones I have worked on from Abu Dhabi, these are (relatively speaking) more robust and have fantastic surface detail. This may purely be a function of diagenisis depending on the exact chemistry of the burial environment, but it may also be that the other material had suffered extensive weathering before burial whereas the Umm al-Ishtan material might have been buried much more rapidly after death and hence preserved more surface detail. The fact that these three bones from Umm al-Ishtan may form part of an articulated skeleton might also indicate a relatively rapid preservation. 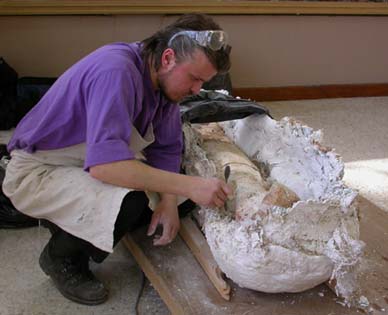 Femur
The concreted material and sand was removed from the femur, and the small fish bones etc placed in plastic bags and labelled. Most of the plaster jacket was removed carefully with the angle grinder and saw. Sand that had adhered to the bone with consolidant during excavation was removed using acetone pippetted on to the material, and the surface of the bone was gently cleaned with the acetone, using very small amounts at a time. The surface of the bone was then treated with a protective layer of thin consolidant at 5% Paraloid B72 in acetone (see below for details). During the lifting of the large heavy jacketed femur from the site and the subsequent transportation, just one crack had opened in the specimen - which, considering its size, weight, fragility and the journey it had undertaken, is a remarkably small amount of damage to be sustained. This crack was consolidated and gap-filled (see below for details of materials). Once this top side of the bone (the underside as found) had been fully cleaned and consolidated, a protective jacket needed to be made out of archival-quality materials that fitted the contours of the bone exactly. This was to be the permanent support for the bone once it was turned over. 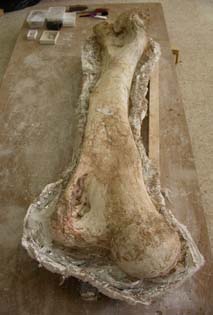 'Moistop' barrier foil was cut to a shape which covered the top third of the upper surface of the bone along its length, accounting for the curvature. To this was sewn an identically-shaped piece of 4mm thick "Plastazote foam" (white, chemically inert, archival standard, low density, closed-cell, cross-linked polyethylene foam). The thread used was a clear, strong, polypropylene thread, regularly tied off. A couple of sheets of thin acid free tissue paper were laid over the specimen to protect it, and the layer of foam and foil was laid in position. A thick gelcoat of Jesmonite acrylic resin was applied to this, being very sure that it was so thick that it did not run off the foil and onto the specimen (though the tissue was there to protect against this eventuality). When set hard, an hour or so later, another thick gelcoat was carefully added. To this were added a further three layers of jesmonite resin with accompanying quadraxial glass fibre matting, alternating with thick gelcoats between (a 'triple-decker sandwich' effect) - always being careful that no drips of resin touched the specimen.

When the jesmonite had set, strengthening "splints" were made from lengths of wood and attached either side of the specimen with further amounts of resin and glass fibre. When this had set, this whole new solid jacket was taken off. Sewing with the thread had ensured that the resin on the outer side of the foil gripped the thread, and with it the foam, so that the cushioning foam didn't just fall out at this point. Once taken off, the jacket was turned the right was round, set on the flat floor and checked for rocking. Rocking was rectified by adding more resin and glass fibre at the appropriate point on the underside of the jacket until the wobble stopped and the jacket stood firm. 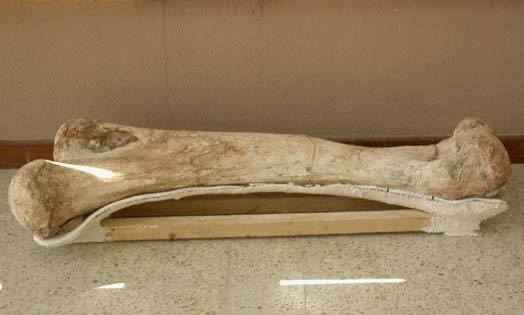 The jacket was then carefully placed back on the specimen after removing the tissue paper. The new jacket was strapped to the remainder of the plaster field jacket securely but not over-tightly along its length. The whole combined sandwich of two jackets (one field plaster jacket, and one permanent Jesmonite jacket) and the bone was then slowly and carefully rotated by two people so that the new jacket was now underneath, supporting the weight of the specimen now it was back the right way up as found in the field and the field jacket was now on top. It was now comfortably sitting in its new, permanent supportive storage structure. The bone sits on the archival foam, which is sewn to the underlying foil which is attached to the resin jacket .

The remainder of the field jacket was removed gently, the excess consolidated sand was removed slowly and carefully with a few drops of acetone at a time, and the femur surface was consolidated (Paraloid B72 5%-10% in acetone). Once this had been thoroughly cleaned and prepared, it was decided that because this surface had been weathered recently as it had lain exposed on the desert surface, it would be more appropriate to store it and display it the other way up, even thought this would be upside-down as found in the field. Another rigid supportive jacket was made for this 'topside' in an identical fashion, and the bone was carefully turned over again to sit in this new, sturdy, supportive jacket. 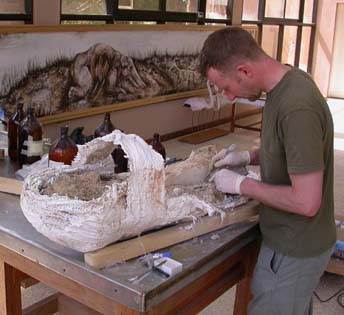 Tibia
Once freed from its plaster field jacket, it was found that the tibia had surprisingly good surface detail, even though it was covered in more hard concreted matrix than the other bones. This extremely hard material had to be chiselled away from most of the surface. It generally revealed a very good surface with fine detail but there were patches that had been destroyed by the growth of selenite crystals, and cracks had been enlargened by the action of plant roots. Apart from this damage the bone is almost 100% complete apart from some areas damaged by recent weathering on the top surface as found in the field. The surface of the bone, once clean, was treated with consolidant about 5% - 10% in acetone. Repairs were made with Paraloid adhesive and Paraloid consolidant. This specimen needed only one supportive rigid jacket (made as above). It now sits in this as found in the field in terms of its orientation. 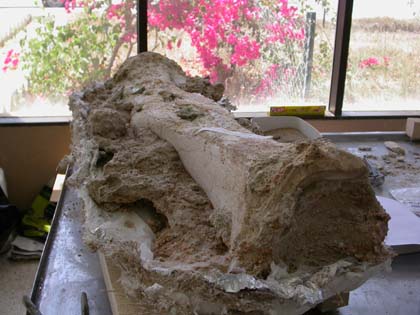 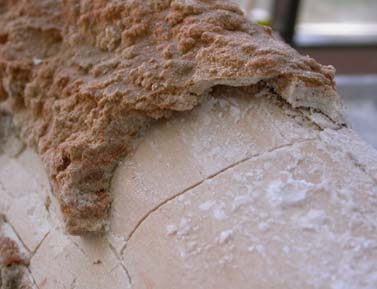 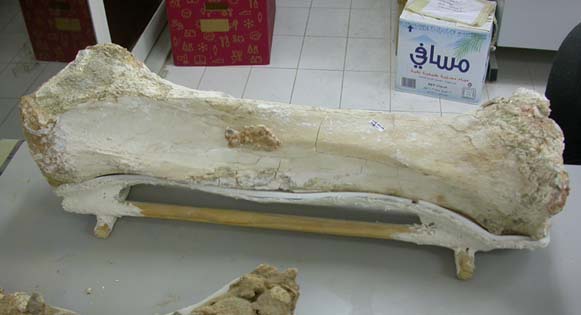 Pelvis
The large pelvic fragment needed the least amount of preparation work. It had some concreted material adhering to it, but it was mostly free of this. However, it had been badly cracked and broken before it was excavated and much time was needed to glue various fragments back together. Not all the fragments recovered could be fitted back on and these remain bagged-up in storage. Some areas needed gap-filling. A supportive jacket was made as above. It now sits in this as found in the field in terms of its orientation. 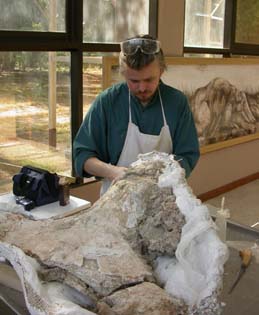 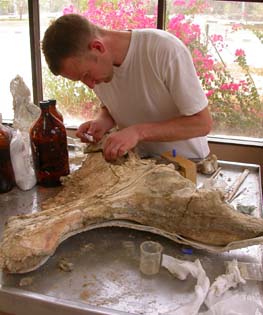 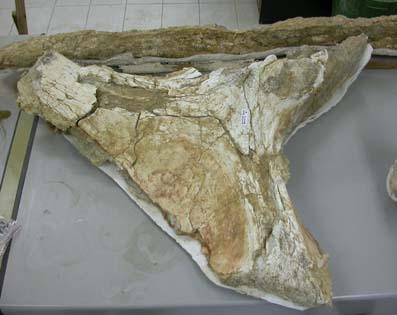 Paraloid B72 (a reversible methacrylate co-polymer), as recommended by the Natural History Museum Palaeontology Conservation Unit, The British Museum Conservation Department and other major conservation departments. The Paraloid B72 was used as an adhesive straight from the tube, or was mixed with acetone in various proportions (5% to 25% Paraloid:Acetone, Weight:Volume) and used as a consolidant to strengthen friable areas and to prepare surfaces for adhesion where necessary. Where a thicker, more viscous adhesive was needed to repair areas where bone had been lost or not preserved, an inert filler was added to the Paraloid consolidant. This was an inert white powder consisting of glass beads 44 microns in diameter, normally used in airbrasive work on archaeological material. This was mixed with consolidant (paraloid in acetone at 25%) at a ratio of approximately 3:1 powder to consolidant to form an appropriate 'paste' consistency. See Comparing gap-fillers used in conserving sub-fossil material. Larkin, N. and Makridou, E. (1999). The Geological Curator 7 (2), 81-90. 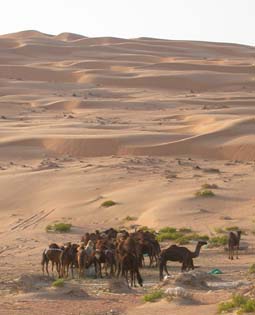 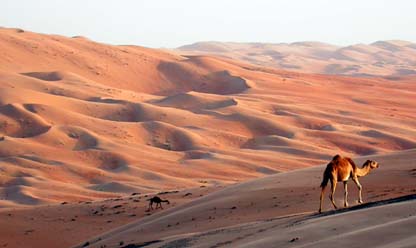 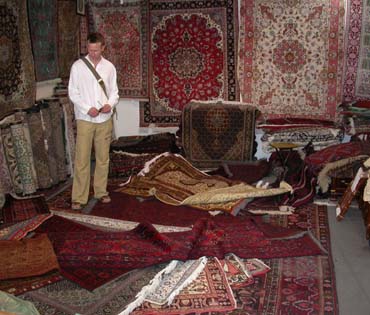 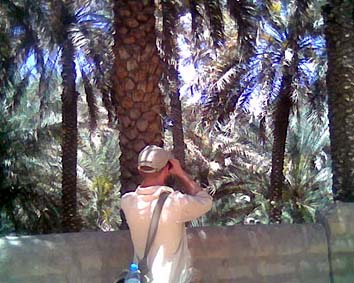 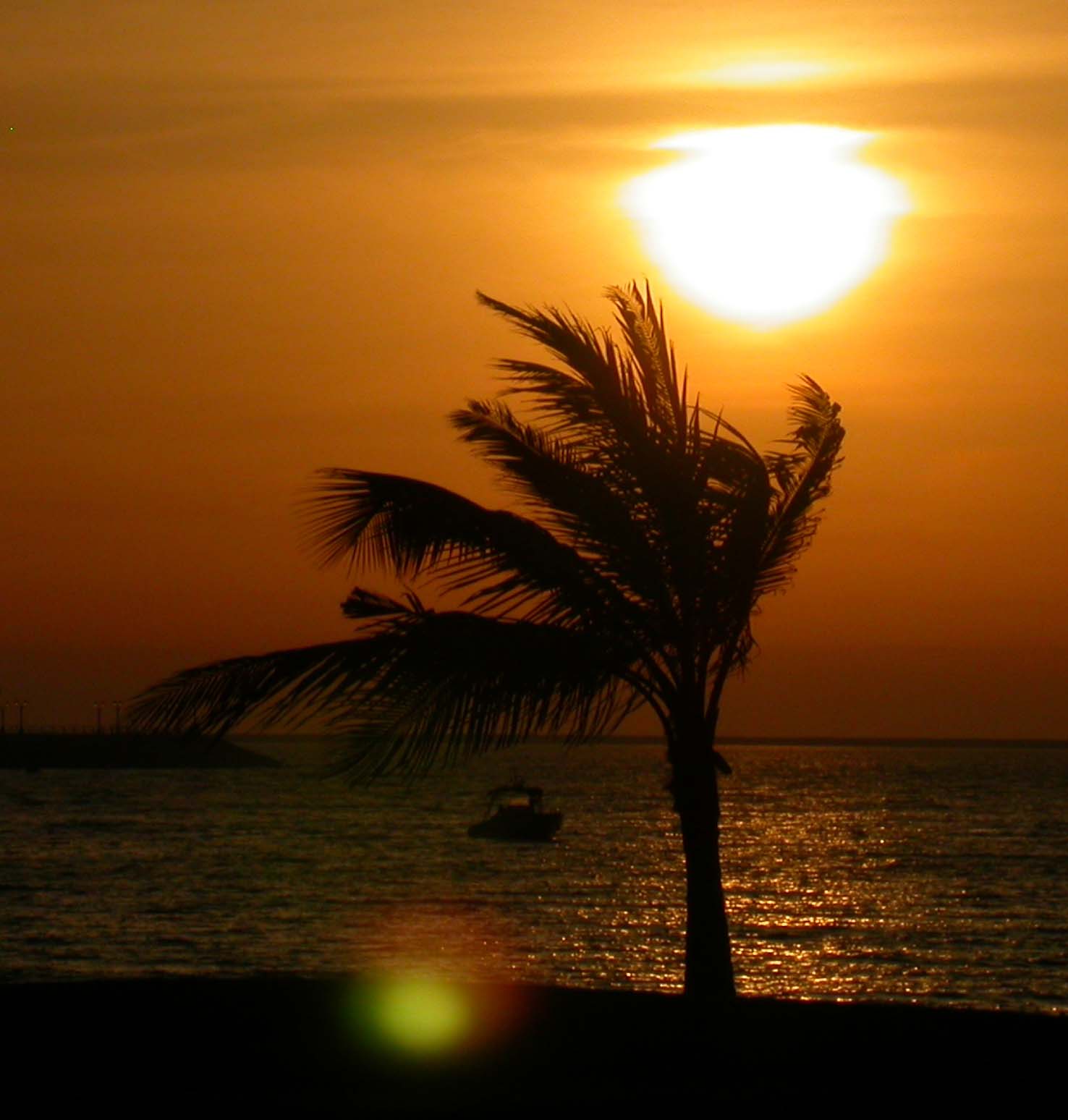