A partial ichthyosaur skeleton from the island of Skye reassembled, conserved and prepared for Edinburgh University and National Museums Scotland,
Nigel Larkin Sept 2016.

This partial skeleton of an ichthyosaur (an extinct marine reptile from the Jurassic age) was discovered in a coastal deposit on the Scottish island of Skye in 1966. It is the most complete ichthyosaur – in fact the most complete marine reptile - ever discovered in Scotland and is from rarely exposed Middle Jurassic deposits (see: http://www.bbc.co.uk/news/uk-scotland-highlands-islands-37255431 and http://news.nationalgeographic.com/2016/09/storr-lochs-sea-monster-jurassic-fossil-paleontology-science/). However, it was excavated in about 140 pieces and has remained in that condition since, making it very difficult to assess and describe the specimen.
In 2015, funding was secured to reassemble all the pieces and prepare the specimen (removing the rock to reveal the bone) so that the fossil could be properly analysed and described for the first time. However, there were no photographs or diagrams of the specimen and only very scant labelling so this task was like piecing together a large, heavy, three-dimensional jigsaw with no image for guidance. Some pieces weighed a couple of kilograms and some were so small and fragmentary there was little likelihood of them being reattached to the rest of the specimen. First, all the pieces were photographed and then sorted into groups according to the numbers that had been painted on them or according to the look of the rock the bones were embedded in. Where clear joins were found, the sides of the break were photographed before being glued back together (and therefore hidden). The sides of the break were consolidated with Paraloid B72 (at 10% in acetone), then Paraloid B72 adhesive was used to glue the edges together. 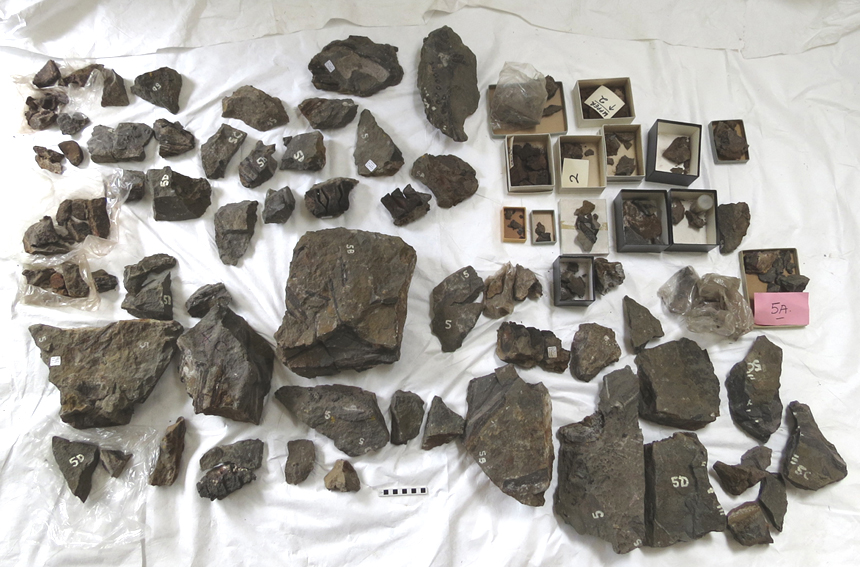 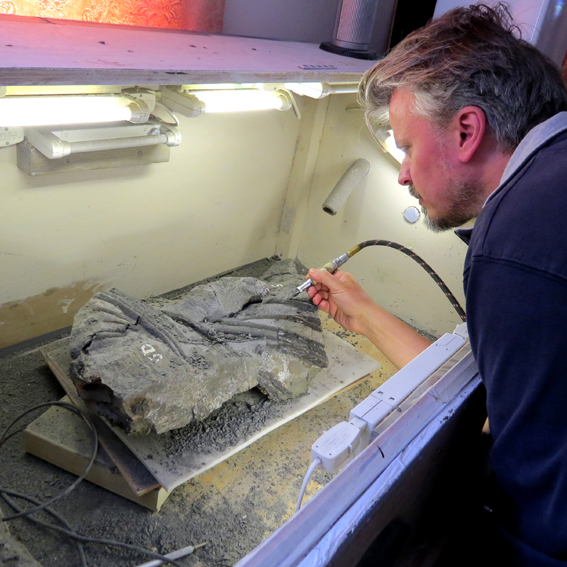 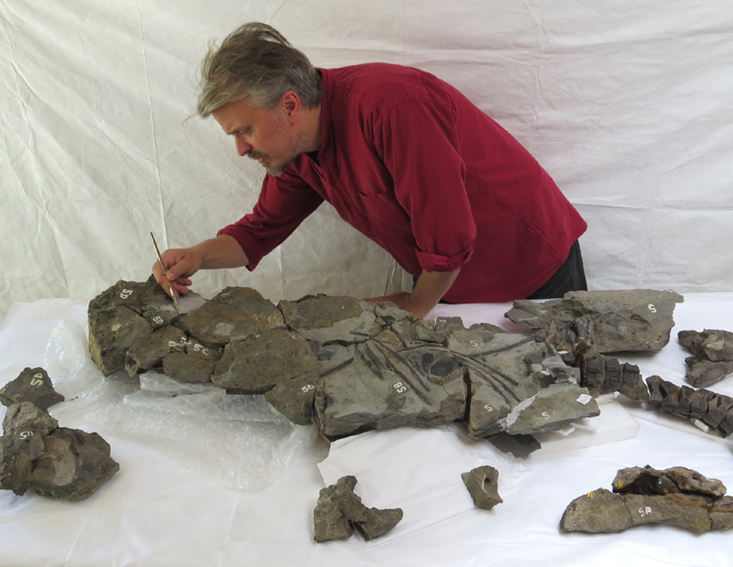 Left, the specimen in many pieces at the start of the project. Middle, removing the rock from around the bones with pneumatic preparation pens in a large glovebox. Right, reassembling the pieces and gluing them together.
As piece after piece was joined together it soon became clear there were three main blocks of rock containing bones and it appeared obvious which way up two of these should be, with bones exposed (slightly damaged from weathering before the skeleton was discovered) on their top surfaces. The largest block, however, had bones exposed on both the upper and lower sides but it did not seem to join anywhere with the other two blocks. Therefore the side with the greater number of bones exposed was taken to be the upper surface and this was this side that was prepared. Only after several weeks of preparation did it suddenly become clear that this side – the nicest aspect of the whole specimen with 17 ribs exposed, many in parallel, and also a neural spine – was actually the underside of the specimen compared the upper surfaces of the two blocks that had already been prepared. Therefore this heavy block had to be turned over and the ‘underside’ prepared. Unfortunately there were much fewer bones on this new topside.
The rock is very hard and unfortunately the bones are soft and fragile. This on its own (hard rock entombing soft, fragile bone) would have made it difficult enough to prepare the specimen but in many areas the bones (particularly the ribs) were encased in a layer of hard pyrite (a metallic mineral) that was even harder than the rock. All bone was treated with a couple of applications of consolidant (Paraloid B72 in acetone at 5%). The fossil was prepared with a variety of pneumatic preparation pens and an airabrasive was occasionally utilised with sodium bicarbonate powder. Where bones were seen in cross-section on the side of a break they were photographed as it may be possible to identify them from their shape.
The prepared and conserved specimen sits on thick white Plastazote foam wedges that are glue-gunned to a Plastazote sheet below, which is in turn glue-gunned to a wooden MDF base. Some of the pieces left over that do not fit on these three main blocks have been glued together where they fitted. 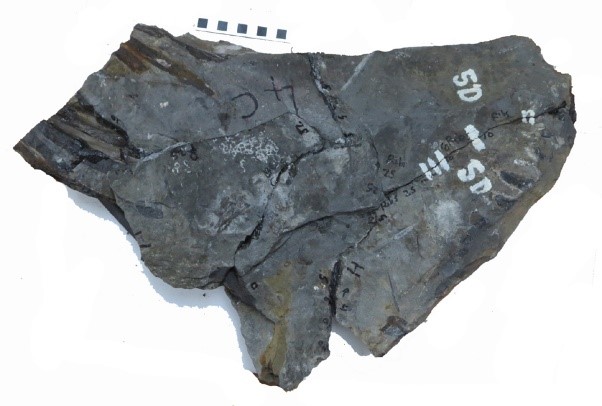 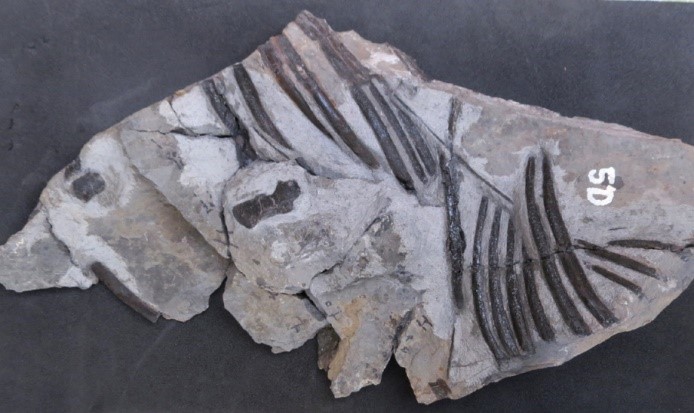 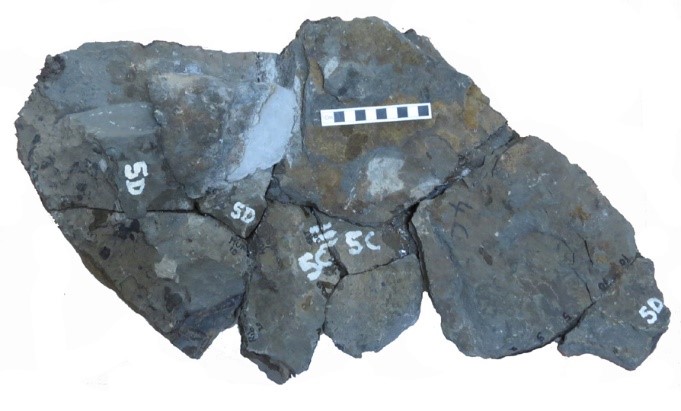 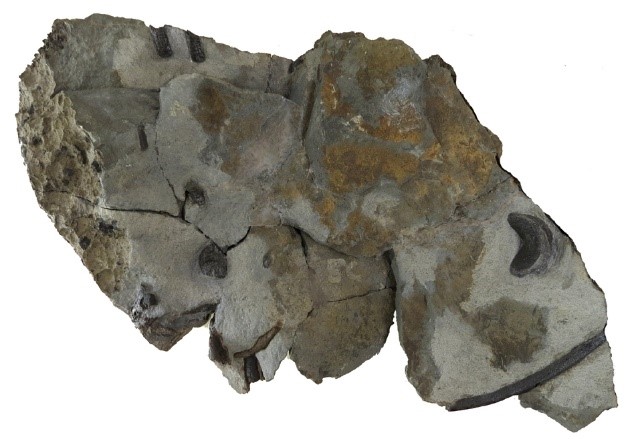 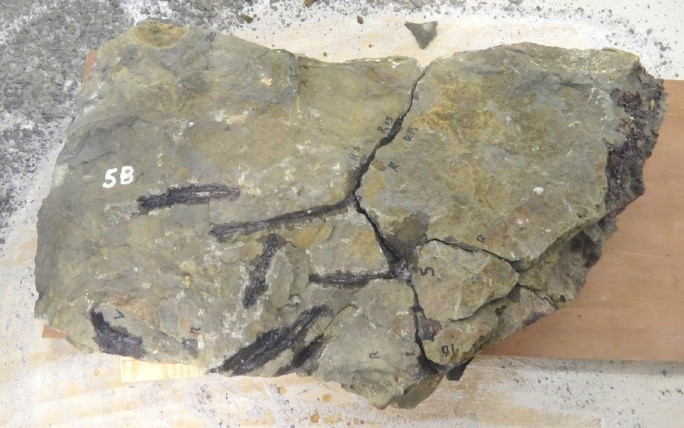 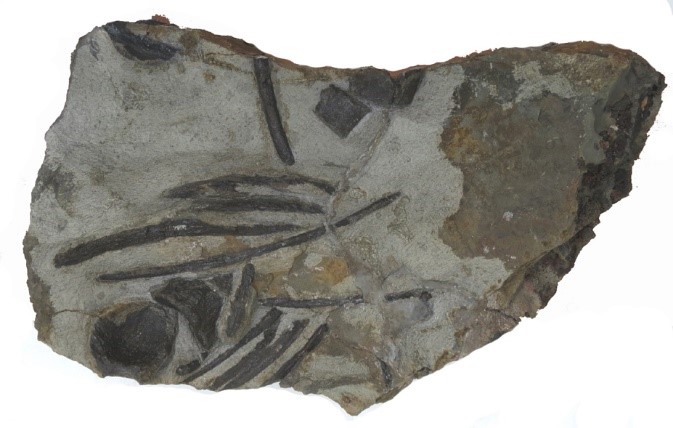 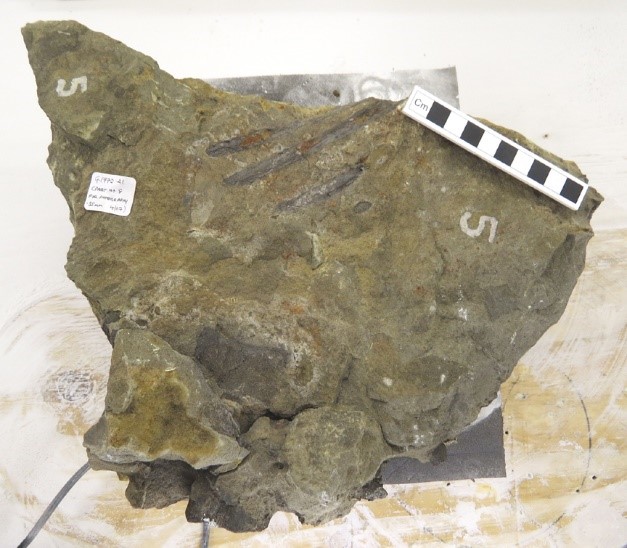 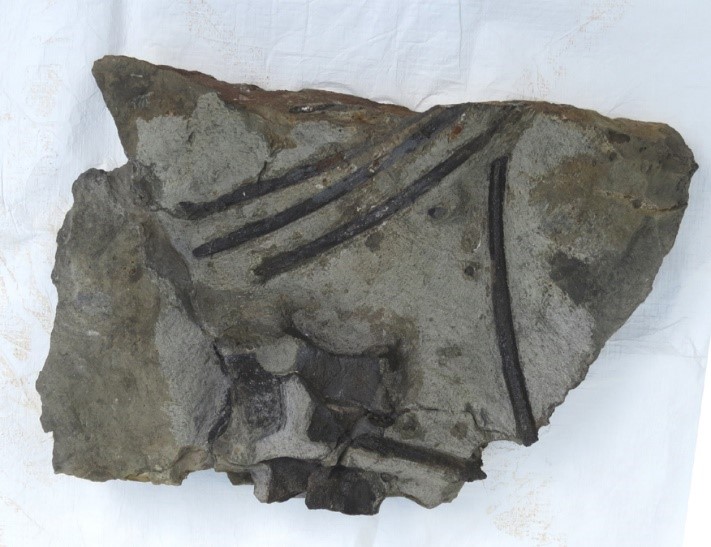 Above: Merged photos of the whole specimen after reassembly, conservation and preparation.

The fossil was discovered on a beach near energy company SSE's Storr Lochs Power Station by the facility's manager, Norrie Gillies. Once analysis of the fossil is complete, the public will have the chance to view it at a number of locations, including SSE's new visitor centre at the Pitlochry Dam in Pitlochry, which opens in a few months' time.