Cleaning, packing and moving a 115 year-old taxidermied adult male orangutan awkwardly stuck in a very fragile old nest of leaves. In a tree. With other nests. Nigel Larkin, 2014.

A taxidermy specimen of an adult male orangutan has been on display in the Cambridge University Museum of Zoology for decades. The specimen sits on a nest of bent branches and leaves of a small tree that also contains two other (empty) orangutan nests. The museum’s documentation states that the nest in which the Orangutan sits is thought to have been made by it to offer some protection against the wind according to the donor. The orangutan specimen, the tree and the nests it contains are all from the Sarawak region of Borneo, Malaysia. It is believed that this is the only specimen on display in the UK of an orangutan sitting on a nest it has made. 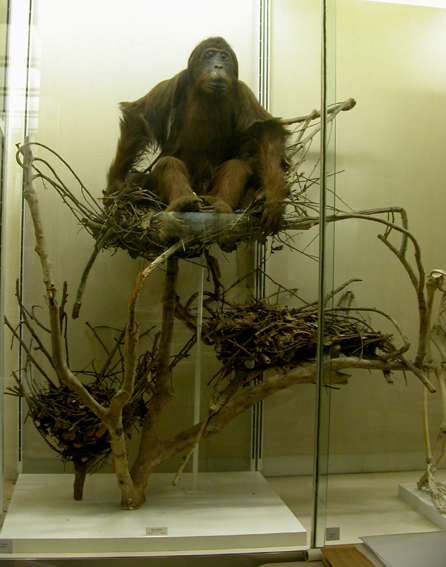 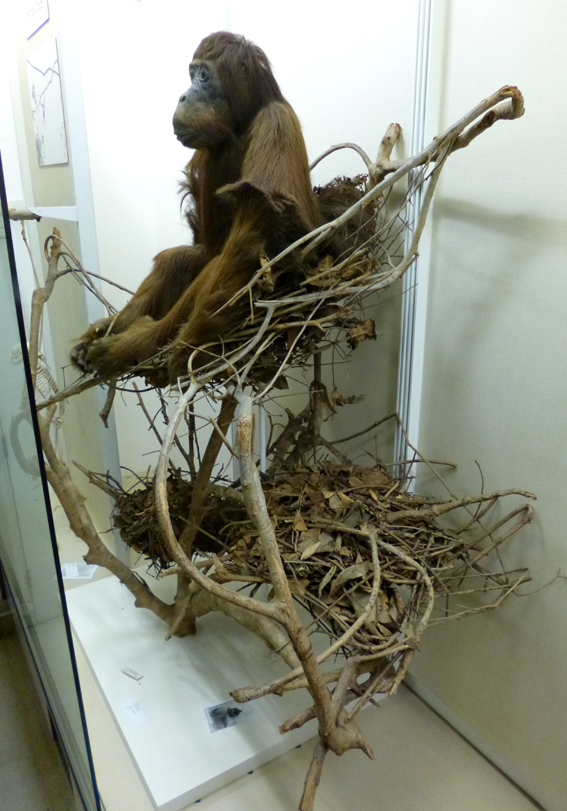 As the leaves and branches of the nests are at least 115 years old they were extremely delicate, brittle and fragile and the leaves would crumble easily. Any cleaning of the orangutan specimen, the nests or the tree should be undertaken extremely carefully and minimally, if at all. Not just because the material is very old, very fragile and very difficult to replace but also because it is covered lightly in a black powder that may well be a historical pesticide such as arsenic. Similarly, the whole specimen should not be moved at all unless absolutely necessary because: it is top heavy with the orangutan sitting on the topmost nest (it cannot be removed as it is attached firmly to the upright pole that supports the tree and it would have to be taken apart to find out how it is attached) making it awkward and more prone to damage if moved; moving it anyway would risk damaging the specimen even if it was not top heavy; and because before the moving process could begin the specimen would have to be cleaned before any packing, to reduce the chances of pesticides being inhaled, ingested or absorbed - and cleaning the specimen, as already stated, would itself pose a risk of damaging the specimen. However, in 2013 museum staff had to begin preparations to decant all the museum’s c.4,000,000 specimens to new stores on site – including all the material on display – as the whole building in which the museum was located was to become a construction site.

Cleaning: The orangutan, branches and leaves were all lightly covered in an unusual very fine black dust, as well as the more normal brown and grey museum dust and fluff. As the specimen was accessioned in 1899 and had no conservation notes on file as to what treatment it had received in the past to prevent pest infestation the safest course was to assume that this was a pesticide powder. Therefore it was cleaned while wearing disposable gloves and dustmasks. Extra precautions were also taken to make sure that the dust did not spread during the cleaning process. A vacuum cleaner with a good filter was used continuously to tidy up scrupulously, and no-one else was working nearby. Also, the glass doors to the display cabinet were kept shut unless work was underway. The leaves and twigs of the nests had to be cleaned as they were. They could not be removed and cleaned individually as not only would this disrupt their order and the integrity of the nest but the leaves were far too fragile to touch as they would crumble so easily. In fact they had to be cleaned without being touched, not even by a brush. The solution was to deploy a rubber ‘puffer’ such as used to clean camera lenses. The bulb of the puffer was squeezed to produce a gentle jet of air in a controlled manner and this blew the dust off the individual leaves as required. The twigs, branches, upright supporting pole and the plinth were also brushed gently with a very soft artist’s brush at the same time as using the puffer, as was the orangutan. The process started at the top of the specimen, the orangutan’s head, and worked downwards. At all times a vacuum cleaner was held nearby, close enough to catch all the dust that was blown towards it but not so close that its suction presented a danger to even the smallest of the fragile leaves. 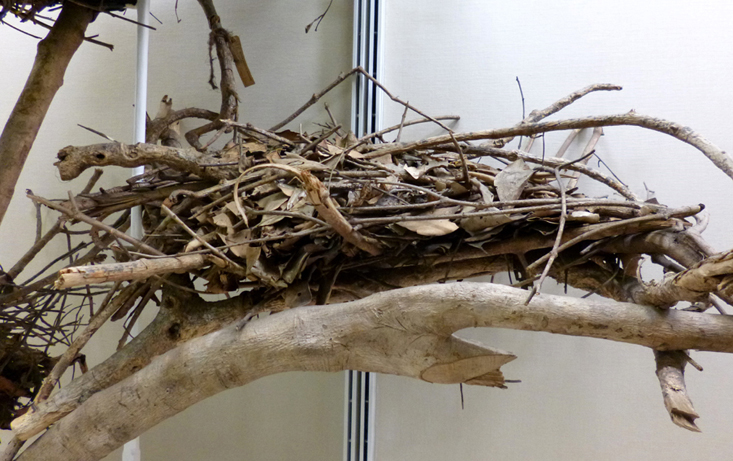 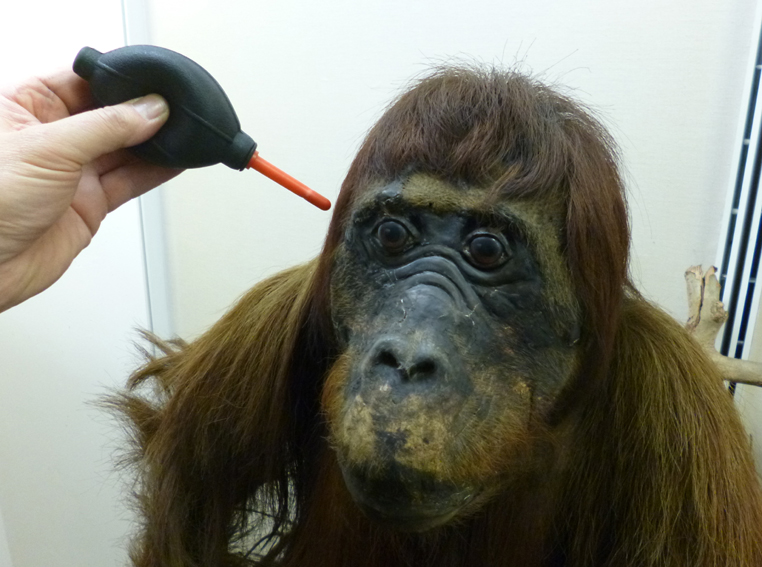 Packing: At the time of packing, it was not clear where the specimen was going to be stored so it was packed to cover all eventualities, even road transport if need be. The intention was that no branch would sway or vibrate, and no leaves would be disturbed. This could only be achieved by making a bespoke wooden crate that completely enclosed the specimen, with wooden batons running from side to side within the crate holding the branches in place securely so that they could not move as the case was being moved to the new store. This would mean that the top-heavy specimen would not sway like an upside-down pendulum and that the nests would not be disturbed. Where the wooden batons were close to the specimen they were lined with white Plastazote foam tied or screwed securely into position, holding the specimen gently but securely in place. It would have been preferable to remove the orangutan from the tree and treat it separately but it had been very well secured to the upright supporting pole and how to remove it could not be identified. It would also have greatly disturbed the very fragile nest material it was sitting on.

The nests presented a unique problem. So fragile that they could hardly be touched, they needed to be held in place so that the leaves did not shift and fall out when the crate was being moved. The solution was to use a combination of acid-free tissue, cotton conservation tying tape, masking tape and Tyvek. Sheets of acid-free tissue were cut to size and placed gently in the concavity of the empty nests and then sheets of acid-free tissue were crumpled and placed gently on top until they made a convex pile within the nest. Then sheets of acid-free tissue were carefully wrapped around the nest, held in place with small pieces of masking tape. Tyvek sheets were then cut to size and wrapped around the nests and were tied gently but securely in place with cotton conservation tape looped around the bundle in all directions. This meant that the leaves within the nests could not move and the nests were also tied to the wooden batons – and had wooden batons and Plastazote foam underneath them – so that they could not move. The same procedure was used for the orangutan and the nest it sat in.

Moving: The wooden crate was 1.6m long, 1m wide and 1.9m tall, slightly bigger than the specimen but small enough it so that it could just fit through several doorways and up a ramp, to exit the museum. The front of the crate was left off so that the specimen inside could be watched whilst it was being moved. If there was any swaying or vibration the process could be slowed down or stopped and the method of transport changed. The crate and its contents were carefully lowered from the display case onto wheeled dollies using a manual stacker with forks. The shallowest dollies were used as there was not much clearance (in the end, less than 1cm) between the top of the crate and the lintels of the lowest doorways. Several people were required to slowly push the crate, steer, hold open doors and watch the doorway lintels. When the specimen was finally positioned in its temporary location in the new museum stores, the front panel of the crate was screwed back on and a label attached warning people not to move it without the specific permission of the collections manager. 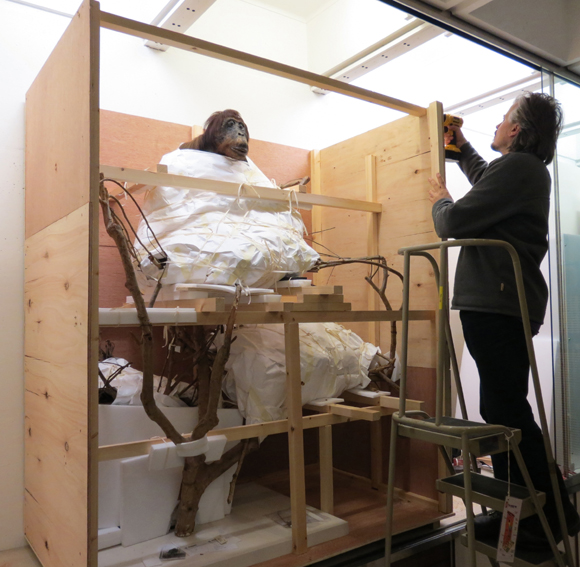 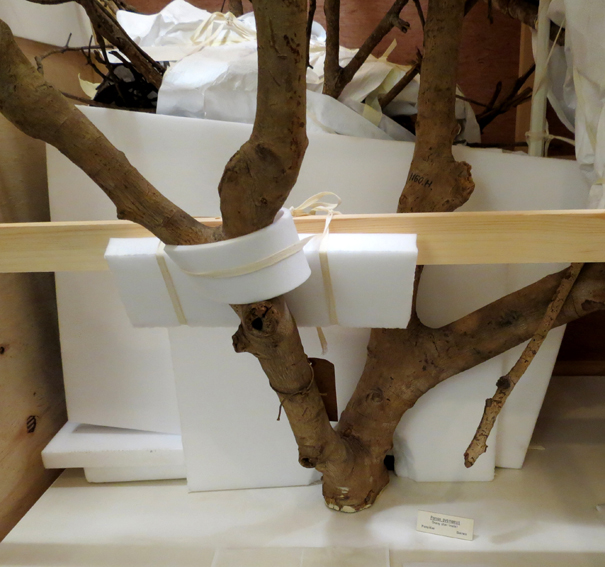 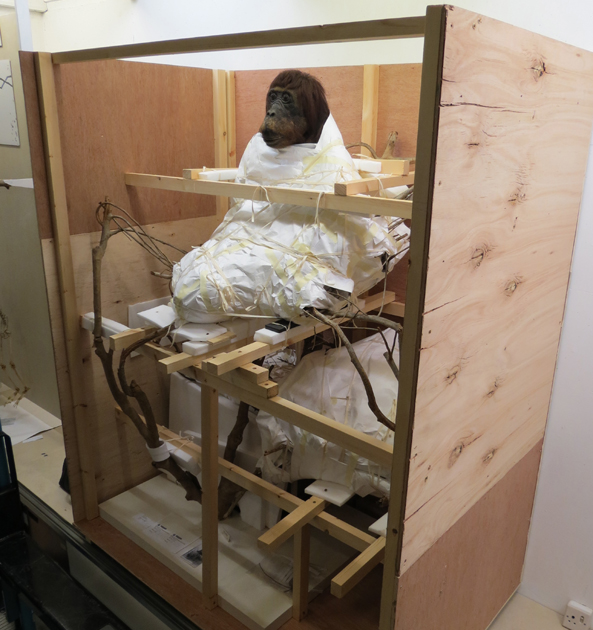