Introduction: The work described below was for a 6-month long exhibition at Bristol City Museum that opened in June 2017 and closes on January 7th 2018. You can find out more by visiting the museum’s website or searching with the hashtag #DeadlyDoris – the nickname given to the beast by the public as part of the publicity leading up to the opening. The skeleton that forms the centrepiece of the exhibition is the ‘type specimen’ of Pliosaurus carpenteri, a large pliosaur skeleton found in Lower Kimmeridge Clay sediments at Westbury in Wiltshire in 1994. You can read more in these two papers:
>Sassoon, Judyth, Roger Vaughan, and Simon Carpenter. "The second Westbury pliosaur: excavation, collection and preparation." Geological curator 9.3 (2010): p-117.
>Sassoon, Judyth, Leslie F. Noč, and Michael J. Benton. "Cranial anatomy, taxonomic implications and palaeopathology of an Upper Jurassic pliosaur (Reptilia: Sauropterygia) from Westbury, Wiltshire, UK." Palaeontology 55.4 (2012): 743-773. See: http://onlinelibrary.wiley.com/doi/10.1111/j.1475-4983.2012.01151.x/full

The specimen is significant not just because it represents a new species, but also because it is one of the most complete specimens of its kind. It is also huge, about 8m long in life, with a skull that is nearly 2m long. For a sense of scale, see the two images below. 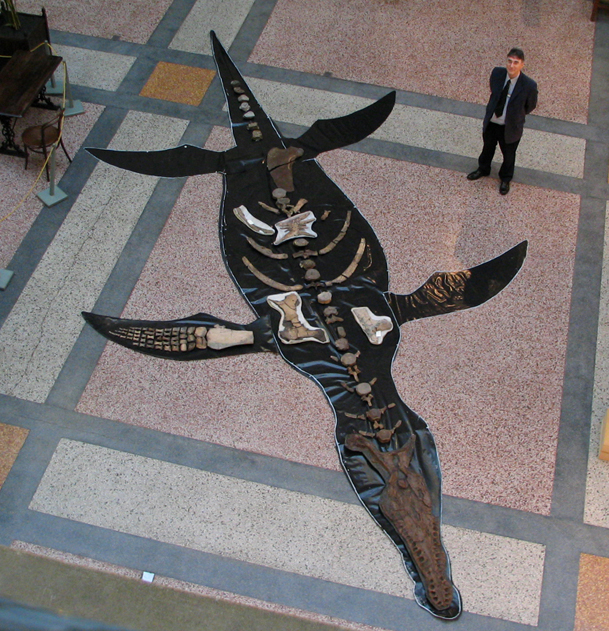 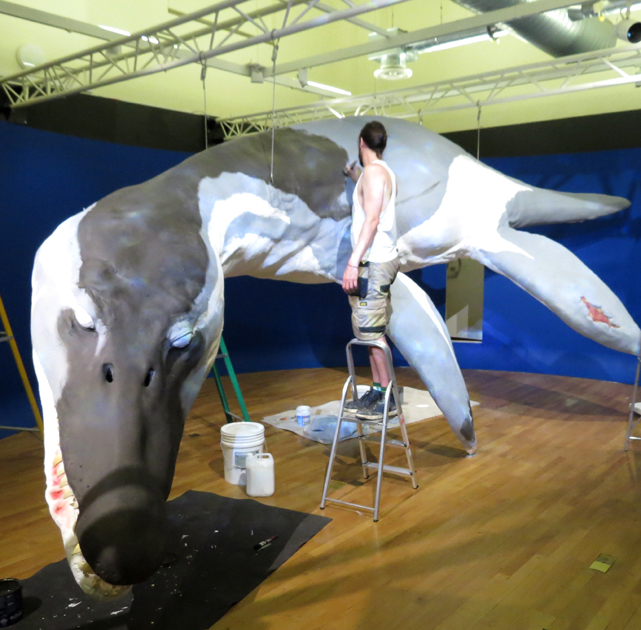 Above left: The skeleton laid out temporarily in Bristol. It has only one limb preserved (although this is fairly complete) and about half of the vertebrae preserved and fewer than half of the ribs. The skull and mandible are complete. Above right: The fleshed-out replica made for the exhibition by Tony Hitchcock.


Scanning the bones and making digital 3D models, then 3D printing some elements: At the start of the project my colleague Steve Dey (at https://www.thinksee3d.com) and I studied the bones so that we could work out how we might mount the whole skeleton and put it on display. Steve scanned all of the bones to make 3D digital models of them so that the designers could visualise how the specimen went together, what it would look like on display and how much space it would take up. This in itself was a huge task. The skull and mandible are particularly important – not only are they most significant part of the animal diagnostically, but they are the bits that people most want to see. Also the skull has some interesting pathology where elements were broken in life and healed over time. 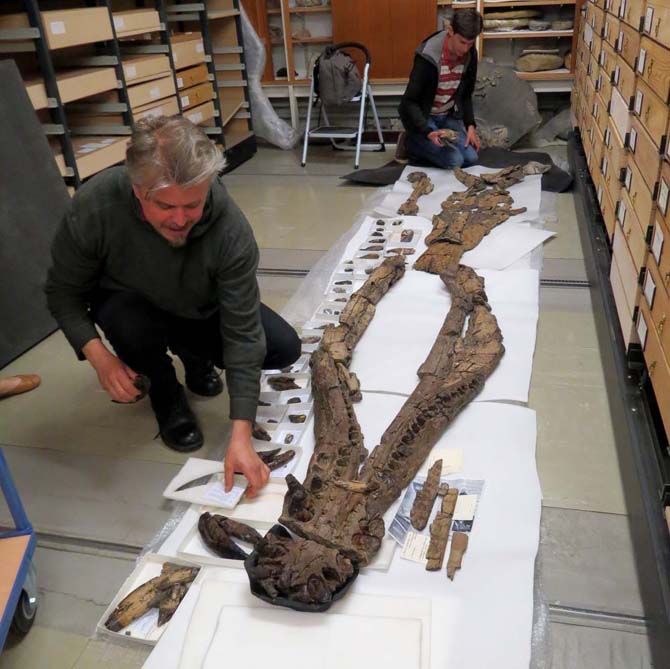 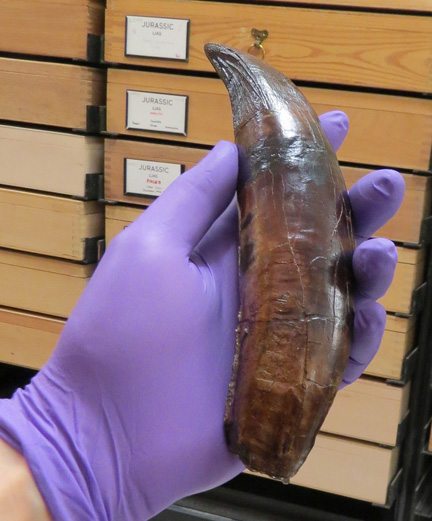 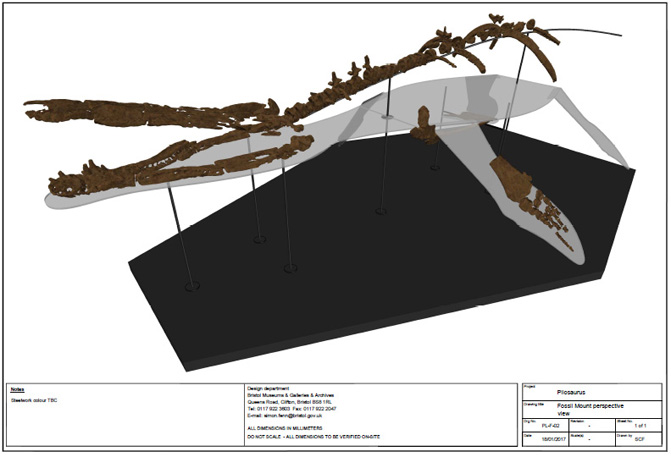 Above left: inspecting the skull (rear) and mandible (front). Above middle: one of the large teeth. Above right: Designing the mount for the specimen.


We considered mirroring some of the scan data to 3D print missing elements, such as making a complete right forelimb based on the data captured from the complete left forelimb and mirroring ribs to make up some of the missing ribs but it was decided to keep the specimen as original as possible. The exception to this was the beautiful but quite awkward skull. This is in 20+ pieces, many of which are thin and fragile, yet the combined weight is in excess of 25 kg. To have mounted the original material would have required a large amount of intrusive supporting metalwork which would have obscured the interesting pathology. So, a replica was needed. One benefit of mounting a replica of the skull, apart from needing less metalwork, was that the original skull could then be displayed elsewhere upside-down so that the interesting pathology of the palette could be seen more easily.
The replica skull could have been made by carefully moulding the individual pieces to make casts but many of the fragments are quite fragile and the moulding process can be a bit invasive so there was a risk of damaging the bones in the process. Instead, we decided to CT-scan the skull pieces and use the data to 3D print the replicas. As well as being safer for the bones, this would provide researchers with data about the internal structure of the specimen for the first time. 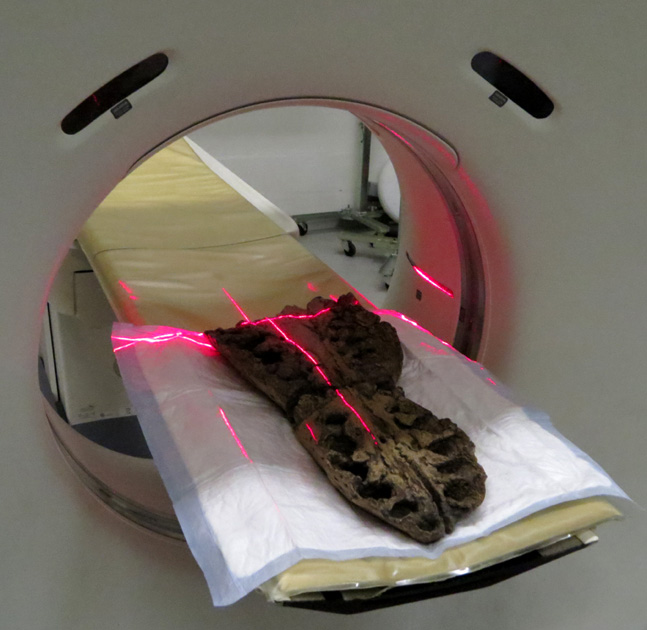 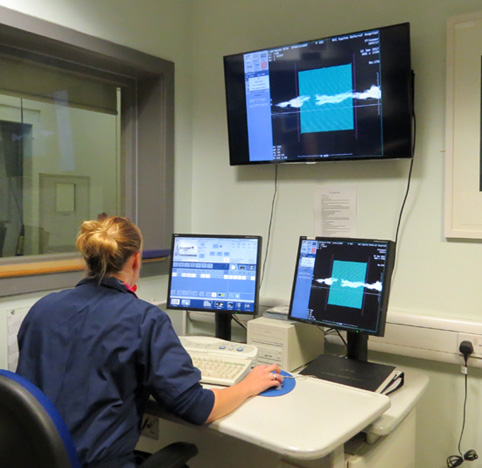 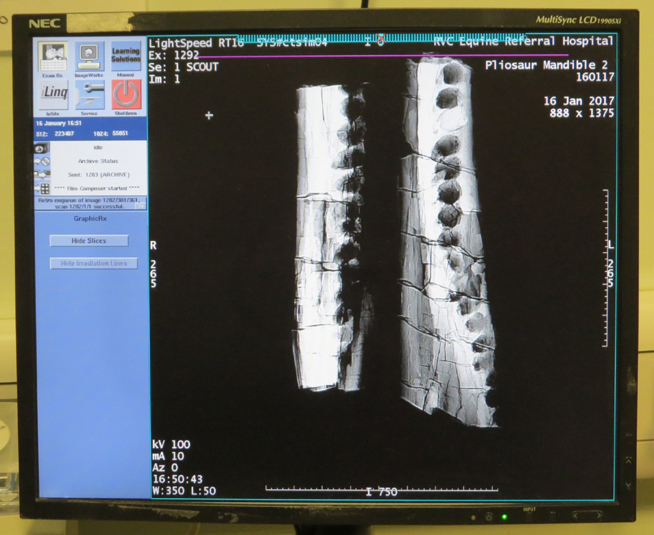 Above, parts of the skull being CT scanned.

There are many ethical issues to consider when mixing 3D-printed models with real specimens. Firstly, the public should be aware of what is 3D printed and what is real – either immediately and obviously as in the case of the Quagga skeleton I remounted at the Grant Museum of Zoology (see image below) or by noting it in the display text. Also, we need to be aware of printed materials offgassing and have an idea of their stability and likely longevity. This Pliosaur display is only temporary and the skeleton is not in a sealed display case. However, in other exhibtions real bones are being mounted with elements that are 3D-printed. Therefore in these instances we (myself and Steven Dey) use what we consider to be the most benign and stable of 3D printing materials: a gypsum-based product which provides a dry, matt texture that is very appropriate for replicating fossil material. In addition, as there seems to be very little research in this area we are actively testing the stability and longevity of this and other 3D printing materials with colleagues such as Gabrielle Flexer in Wiltshire through undertaking Oddy tests etc. 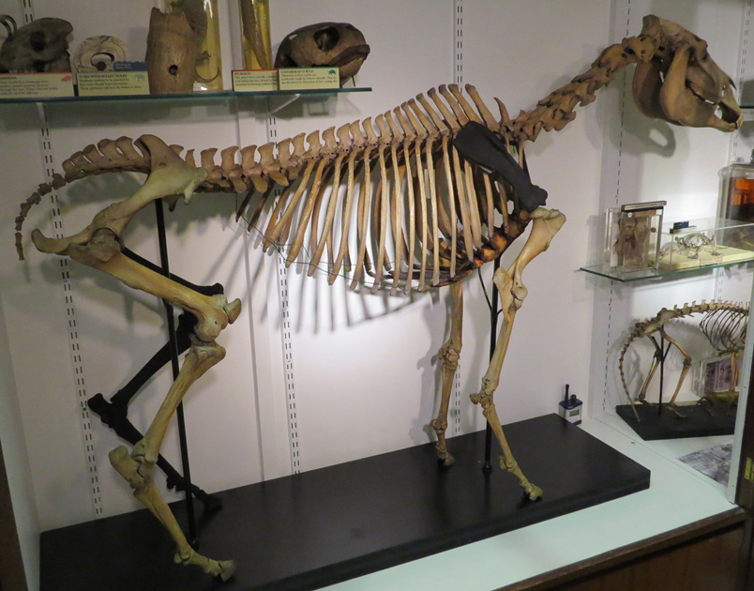 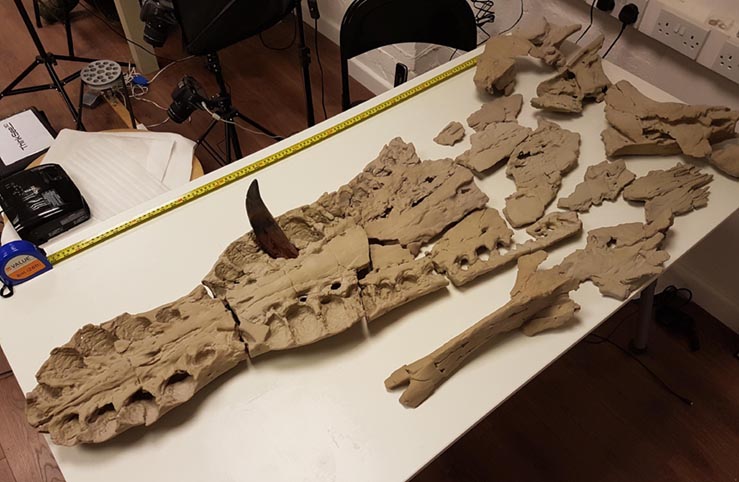 Above left: The Grant Museum of Zoology Quagga skeleton. Note the black rear leg and right shoulder blade that were 3D printed and coloured. See: http://www.natural-history-conservation.com/quagga.htm. Above right: The 3D-printed pieces of the skull, nearly 2m long.


The 20-odd pieces of the Pliosaur skull were 3D-printed in gypsum and were articulated by gluing the smaller pieces together and then drilling holes lengthwise through the thicker pieces for two long thin steel rods that would hold them all in place. The thinner pieces had channels cut into them with a mixture of angles grinders, chisels and scalpels, in which the rods could sit. Any gaps left from this process were filled with Jesmonite acrylic resin bulked out with hollow plastic microspeheres to lessen the weight and to enable the filler to be carved into shape.

Making the metal mount for the skeleton: A sturdy 8m long, 2.5m high, steel and brass mount had to be made to support over 100kg of fossil bone and the 3D printed skull. This required several months of blacksmithing, welding, grinding, soldering, brazing and painting to make an appropriate supportive structure. The metalwork was lined with inert Plastazote foam where the bones would sit, to protect the bones from the metal. The skull was 3D printed but the teeth, which had been preserved separately, were carefully moulded and casts were secured into the skull in appropriate positions. The replica skull and the teeth casts were painted to match the original material with artists acrylic paints. 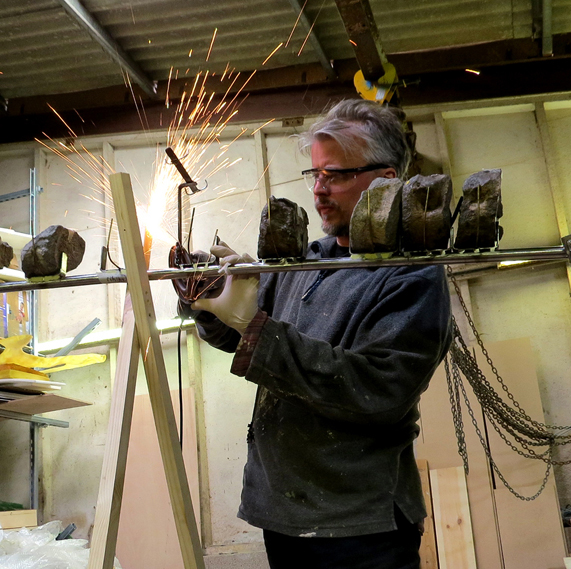 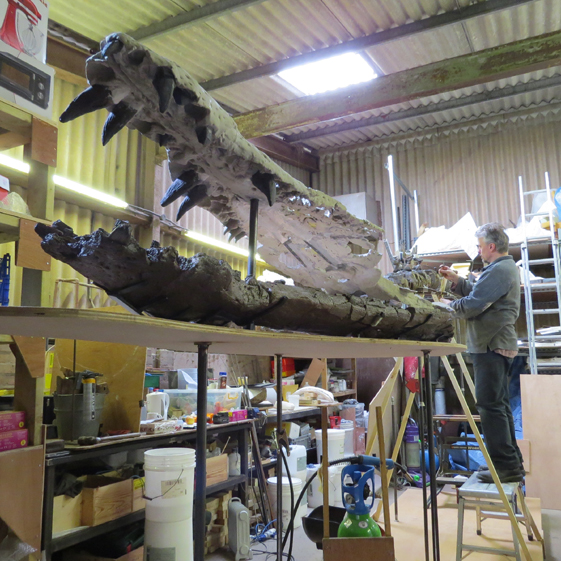 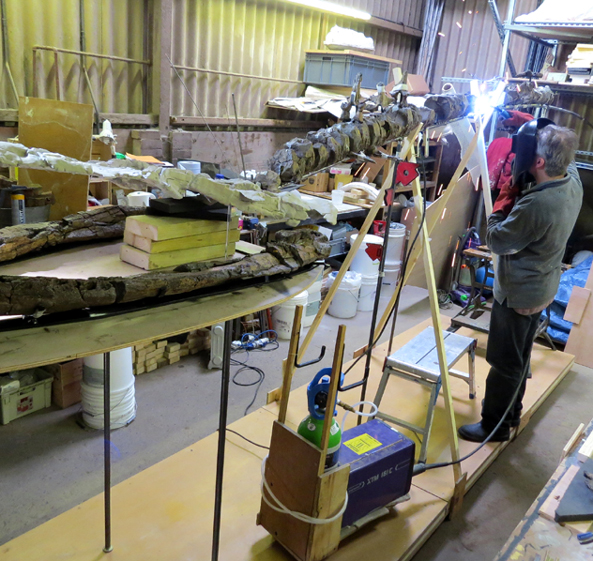 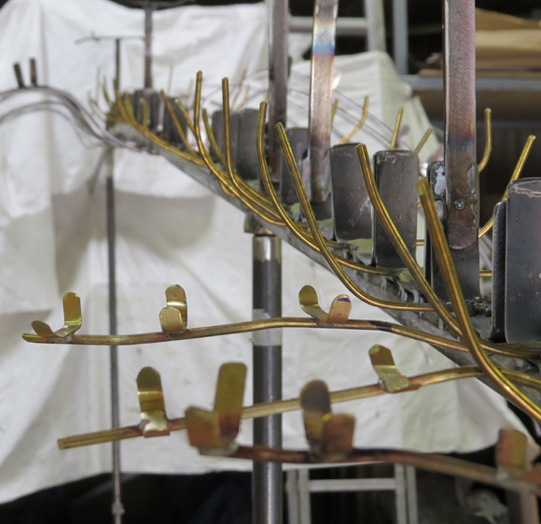 Above: Making the metal mount. 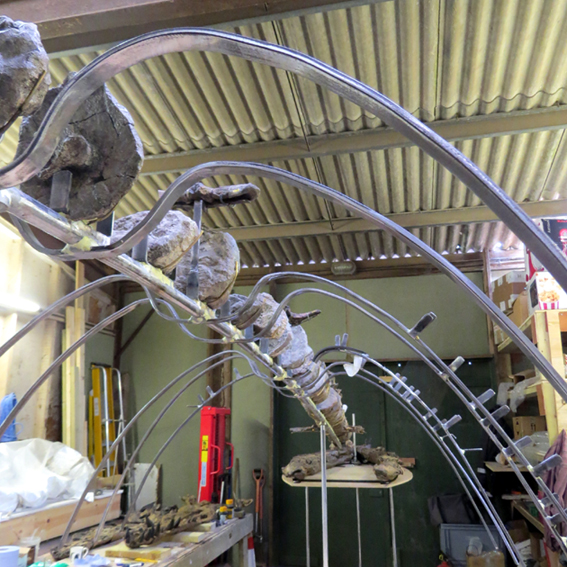 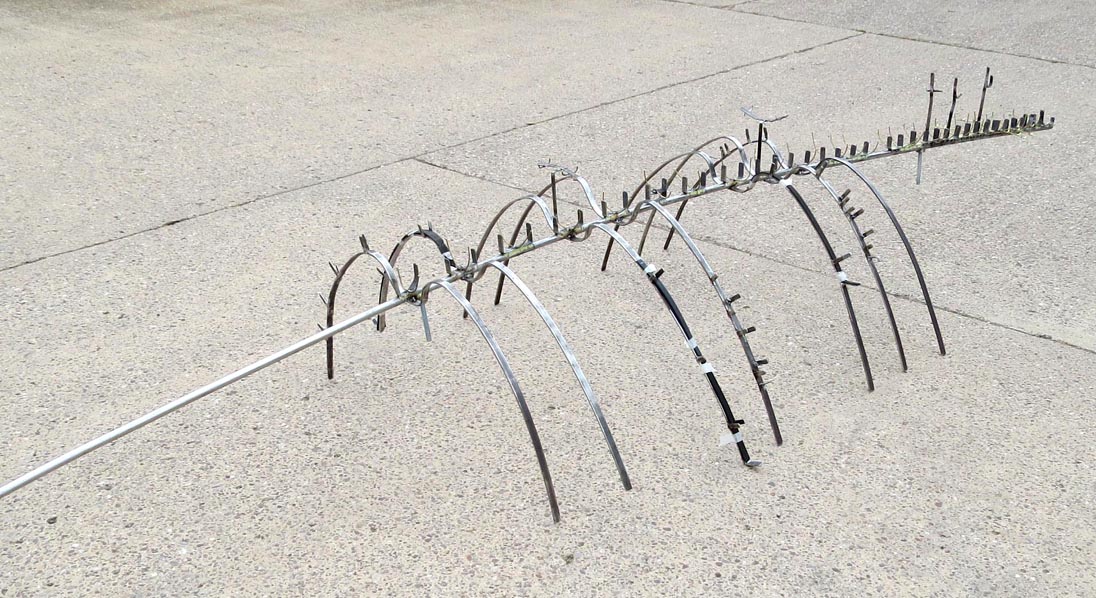 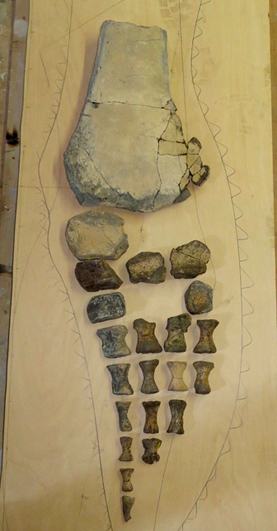 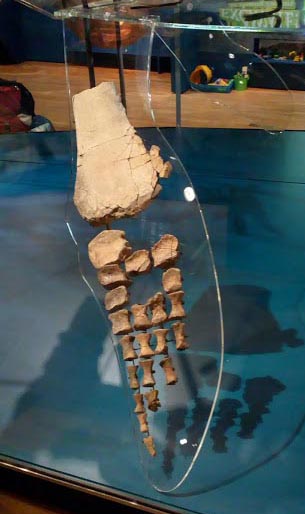 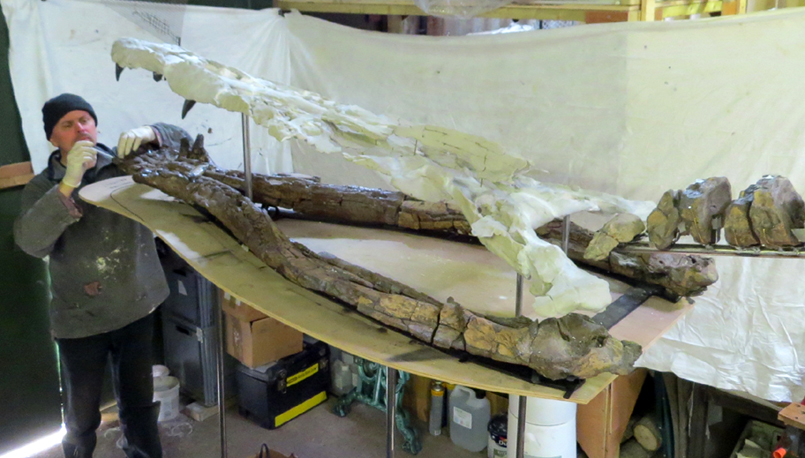 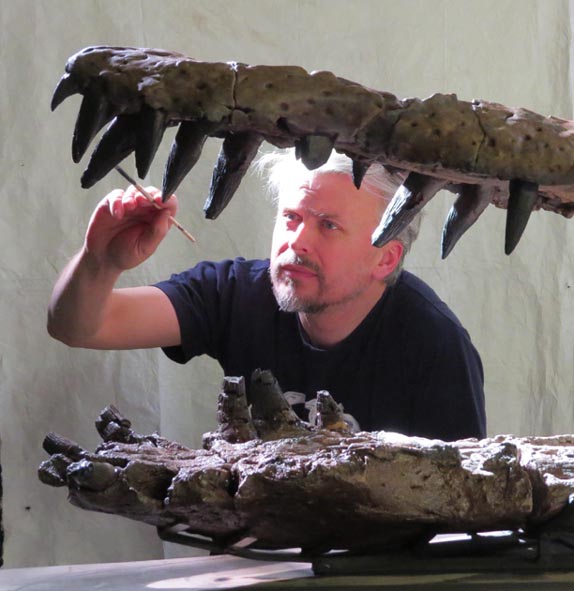 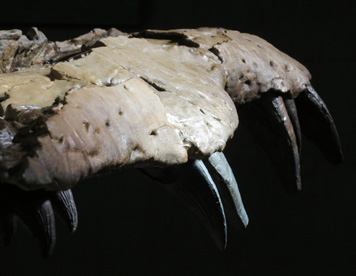 
Installation: The mount was made in sections so that it could be transported to Bristol and could be carried into the gallery through the various doors, lifts and corridors. The installation went smoothly. However, the Perspex surrounding the specimen (so that it cannot be touched by the public) gets in the way when taking photos.
This first thing you see as you enter the exhibition is the massive model, up really close and touchable. Then you turn through a doorway and you are faced with the huge open mouth of the real skeleton and as you walk in you see the rest of the skeleton stretching down through room. Satisfyingly, many palaeontologists were invited to the opening night and none of those I spoke to had realised that the skull was a replica until I told them. 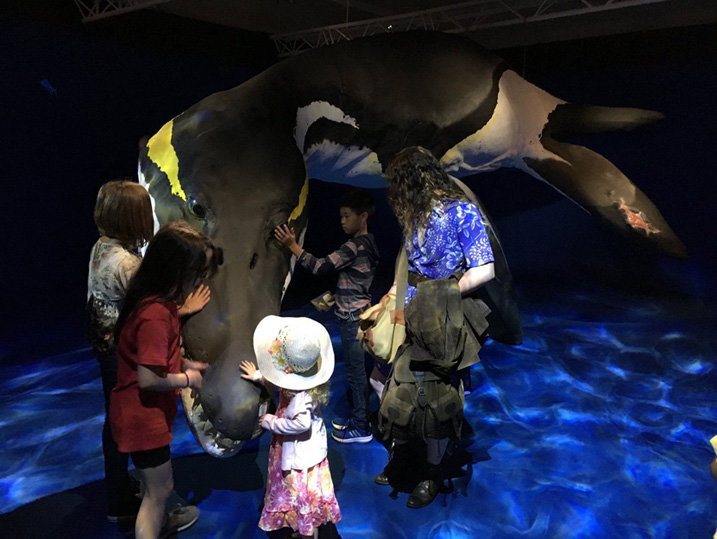 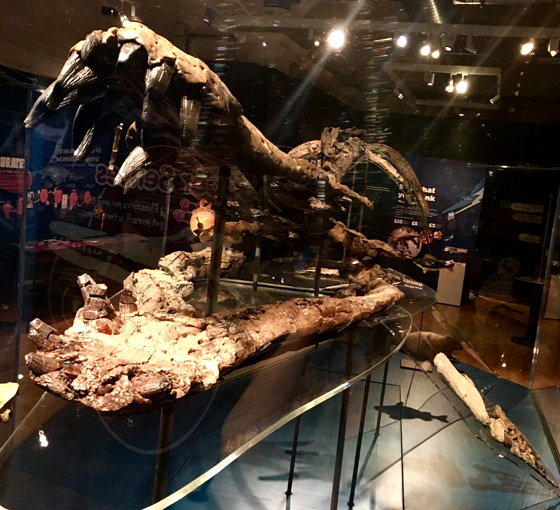 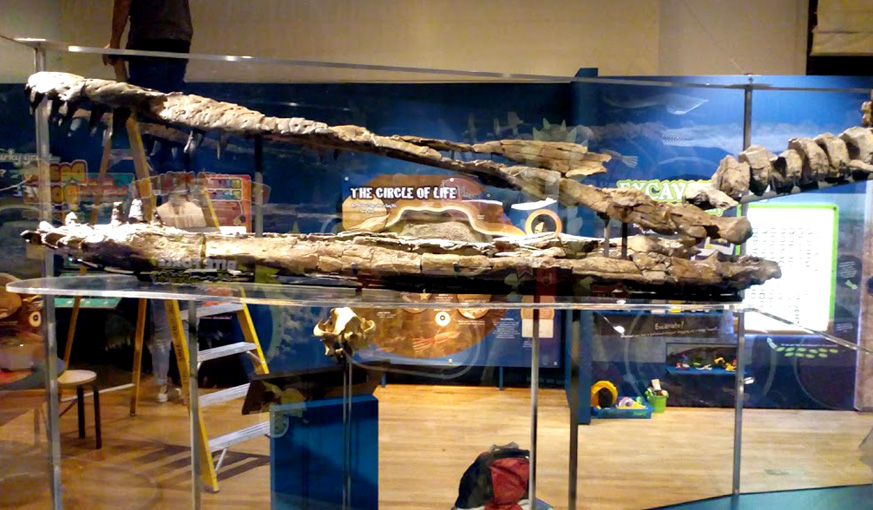 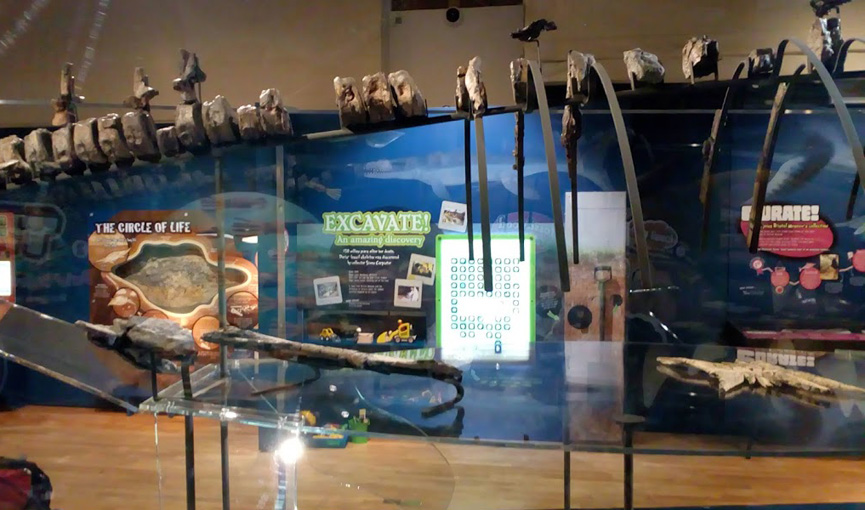 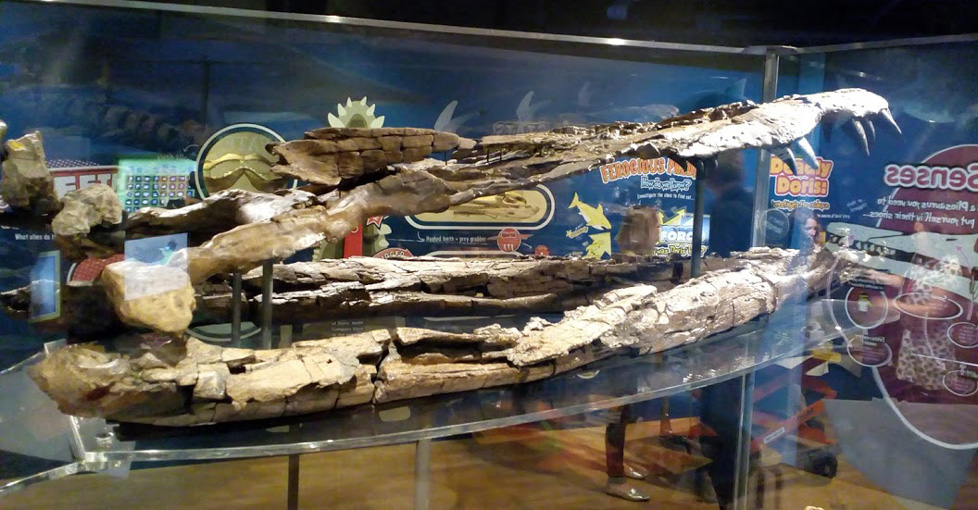 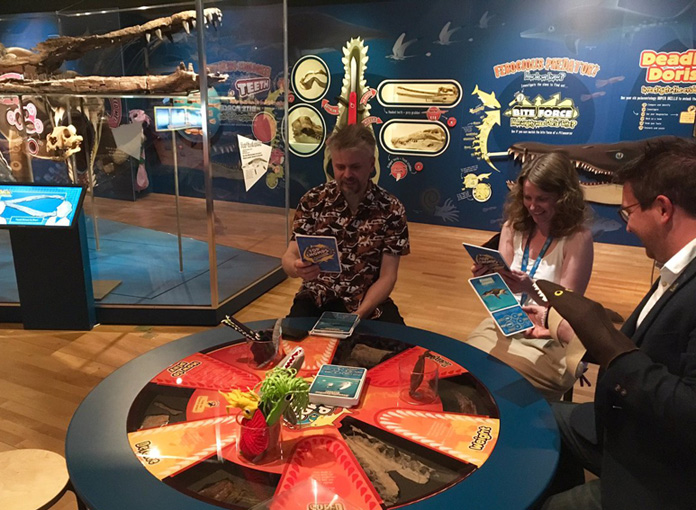 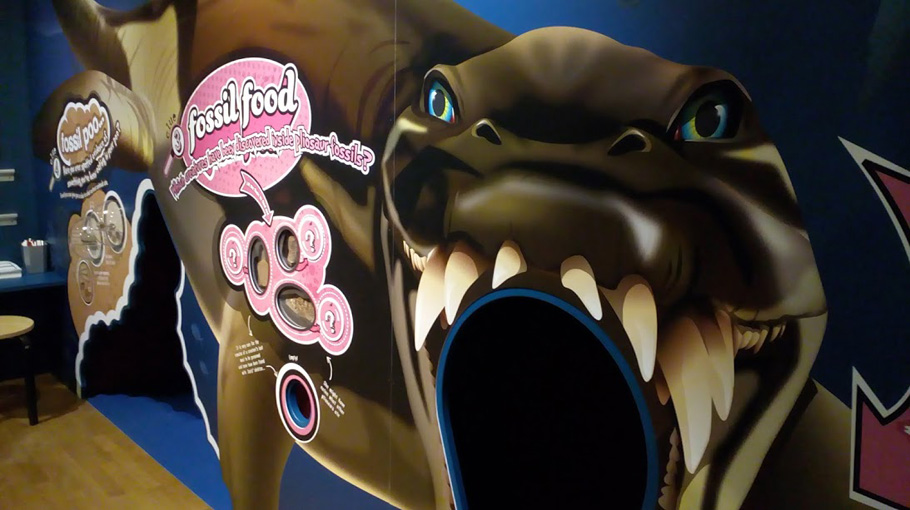 As well as the skeleton of the pliosaur and the massive fleshed-out replica, there are other associated marine fossils on display and some really great interactives including a specially-designed game of ‘Top Chomps’ (above) and you can dress up as a turtle, belemnite or fish, climb in through the mouth of the pliosaur (above), hear the rumbling of the stomach as you crawl through the beast, to finally be pooed out of the other end with suitable accompanying sound effects.