At the Mount Stewart National Trust property in Northern Ireland near Belfast, there has recently been a major refurbishment programme. As part of this, two sets of ancient giant deer antlers and skulls had to be removed from the drawing room, stored, and then rehung after refurbishment and building work had taken place. The opportunity was taken to assess the specimens and undertake the necessary cleaning, repairs and other conservation work, and to rehang them in a more appropriate manner. Nigel Larkin undertook this work.
1 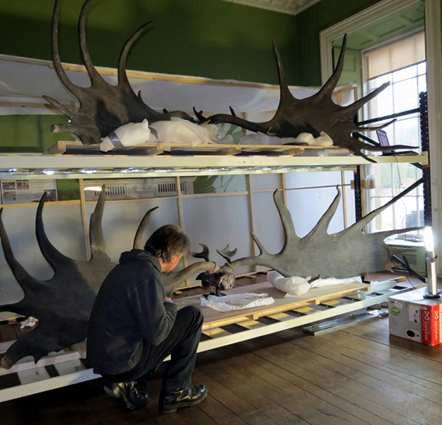 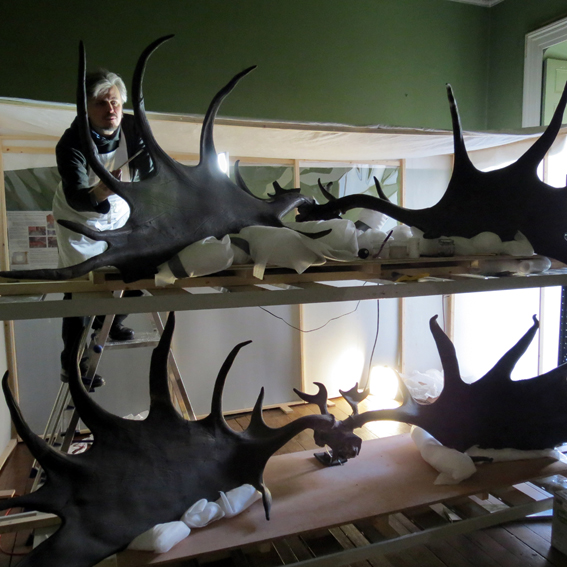 Above: The two sets of giant deer skulls and antlers in storage and being worked on.

Assessments: First, the specimens had to be assessed and a plan of conservation agreed. Both sets of skulls and antlers were understandably very dusty, with household dust and some debris from plaster of paris that broke and powdered as some joins between the antlers and the skulls failed when they were taken down many months before. Both skulls had been covered in a thick dark brown varnish, normal for the time period these were put together. The temple of one skull by the right antler has broken badly, but this seemed to mostly be modelled-in plaster (figure 1). There was a major crack running through the middle of the same skull, down the ‘front’ (as displayed) (figure 3). Interestingly, the pedicle of the main beam of one of the antlers has been sawn through in each specimen to provide access to attach the antler using the dowel and plaster method, presenting a major issue in terms of the lack of mechanical integrity even though one of these antlers is also attached to the skull by a metal strip (figure 3). Compounding this are various breaks and deliberate cuts in the antler, where the antler has been sawn through, presumably to insert wooden internal supports, as there are screws either side of the breaks (figure 4).
Overall, the specimens have little mechanical integrity and are more fragile than they look. Not just because the antlers are actually in pieces held together with numerous dowels and other woodwork inserted over the years and screwed together with plaster, glues and resins patching them up (which is quite normal), but because the main beams of two of the four antlers has been sawn through and is loose and mobile independent of the skull. They cannot simply be glued back into place before being rehung, as the glue would give way in the process due to the mechanical forces involved.
3 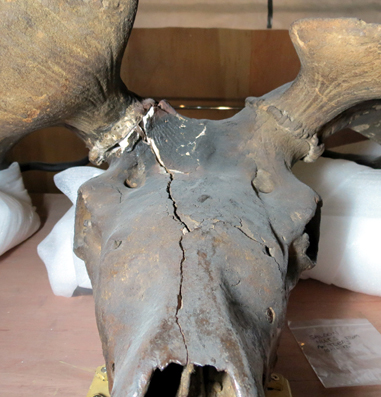 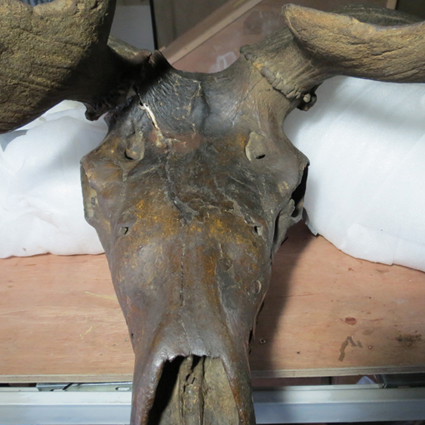 Above: The first skull before work started (left), and the skull cleaned and the crack filled (right).
5 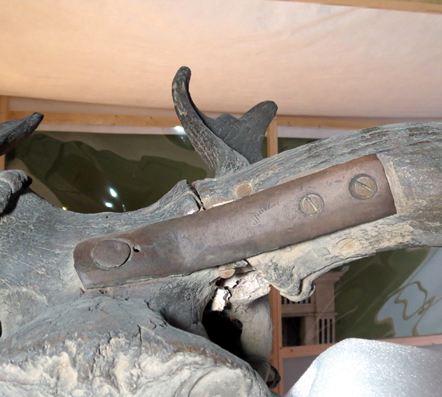 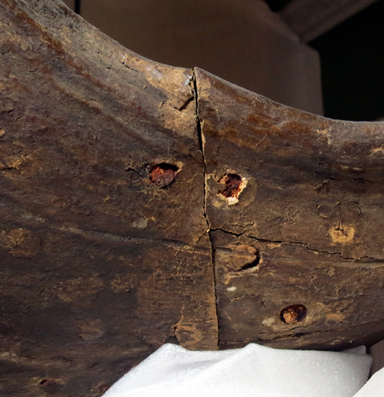 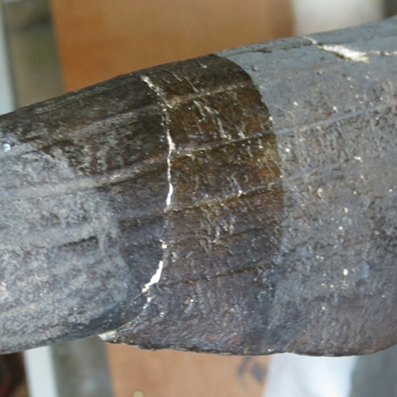 Above: The metal support from the skull to the right antler beam (left); A cut through one of the main antler beams (middle); and the specimens were quite dusty, shown here where Tyvek had been tied around the middle portion of the tine, where no dust settled (right).
8 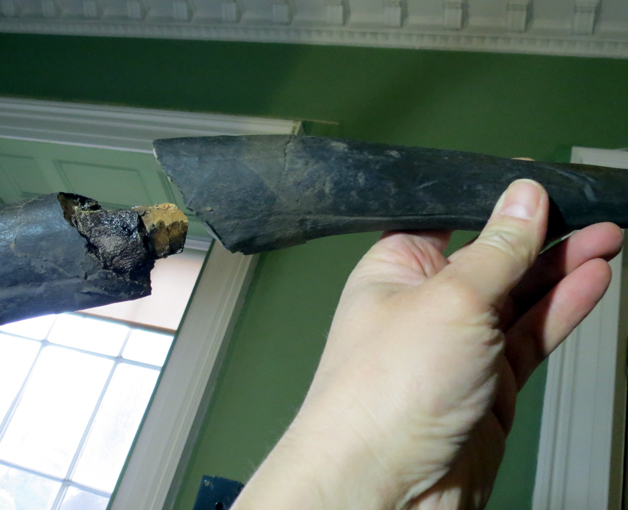 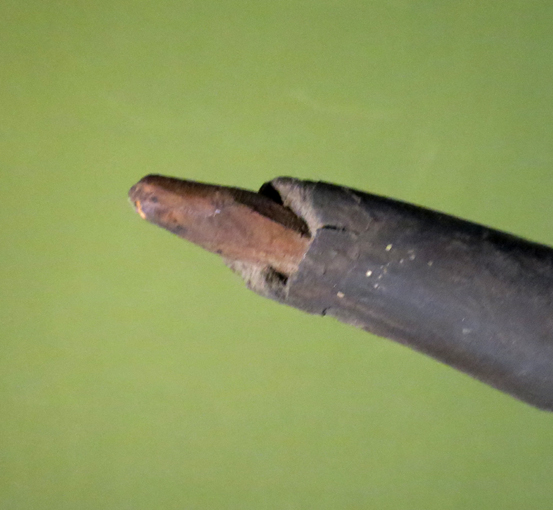 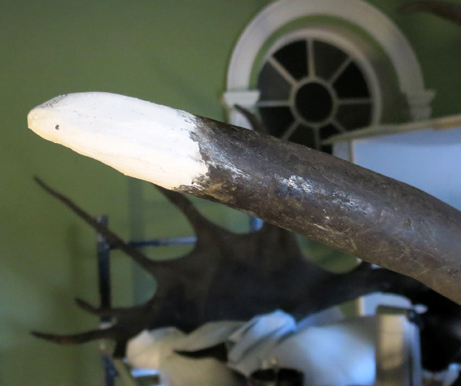 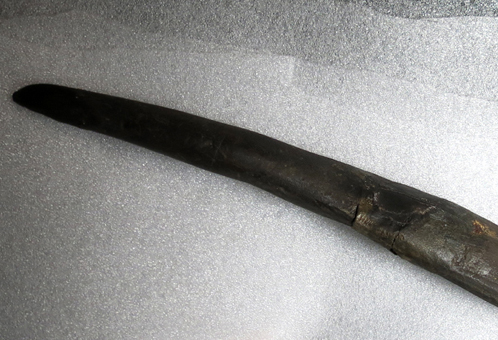 Various antler tines had been broken and repaired at some point in the past, so they are very weak, but only a couple had been broken off recently and had to be re-attached, entailing some modelling-in of missing pieces with plaster of paris, See above for an example. The fifth tine of the right antler had to be re-attached, and the tip of this tine needed to be modelled in around the wooden dowel poking out of the end. Also there was a gap on the join that needed modelling-in with plaster. The plaster was then painted out. Another example is below.
12 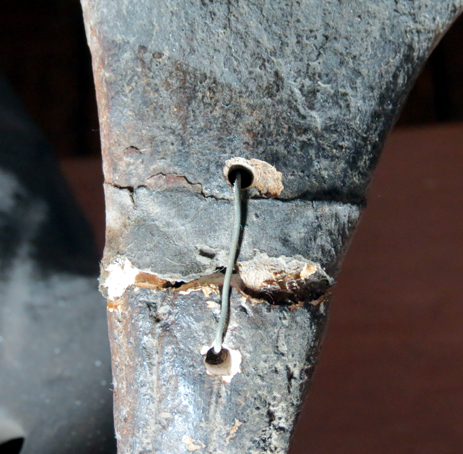 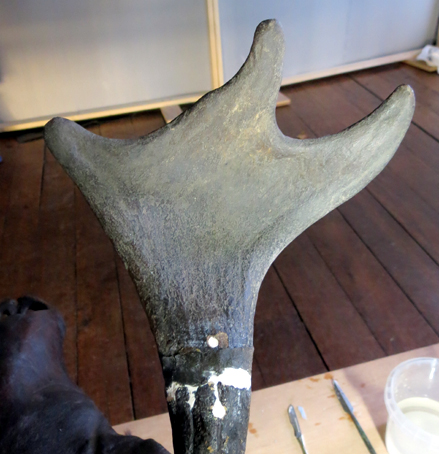 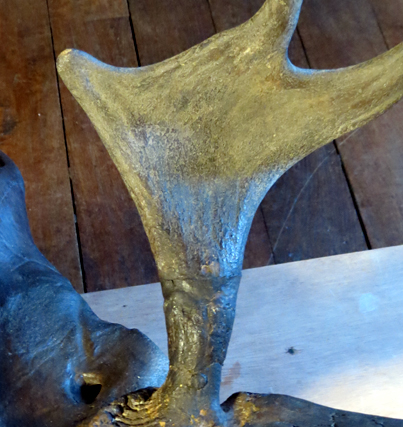 Above: The first tine of the right antler: held in place with wire poked through holes drilled; the wire was removed and the break was consolidated and glued together; plaster filled the gaps and was painted out.

Some portions of the antlers were missing, leaving holes but interestingly this did show some of the internal structure with pieces of flat wood visible, along with some glues and plaster or resin providing support. The edges of these holes were consolidated and glued, and the areas filled with plaster and painted out (see below).
15 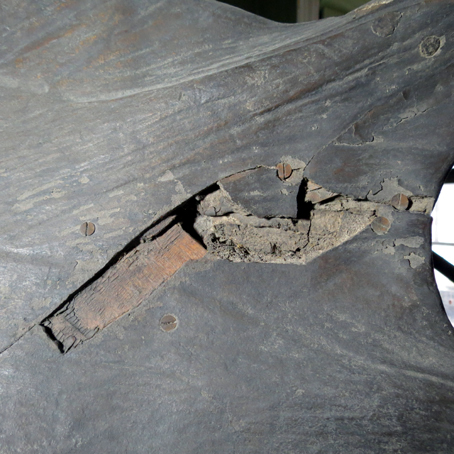 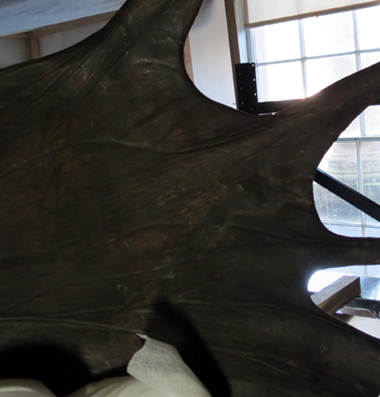 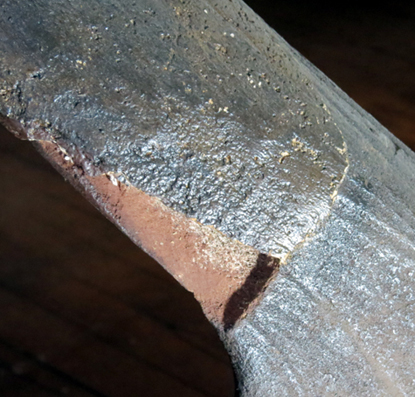 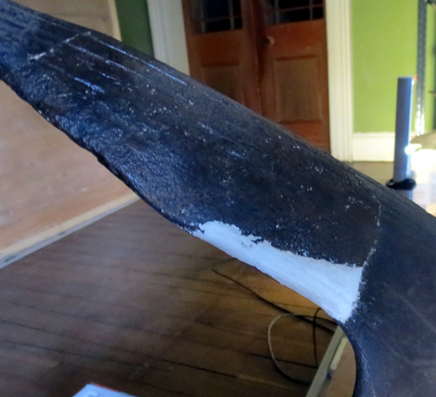 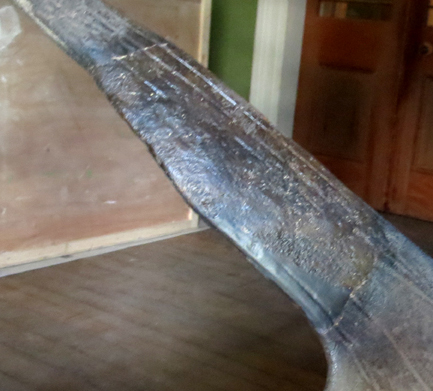 Above: The gap in the palm of one of the antlers, showing internal wooden support (15), and the right the gap filled with plaster and painted out (17); A section of old modelled-in plaster had fallen off this tine and been lost in the past (18). This area was consolidated and filled with fresh plaster (19) which was then painted out (20).
Cleaning: Both sets of skulls and antlers were covered in normal household dust and building dust. You could see where, despite being coved with a screen, very fine dust had settled either side of where Tyvek was tied to some times (fig 7). In places they were also covered in powdered and broken bits of plaster of paris (figs 3, 21 and 23). The dust could mostly be removed with soft brushes, brushing into the nozzle of a vacuum cleaner held nearby. Where there was plaster of paris, mostly on the skulls but also the proximal section of the main antler beams, these areas needed to be cleaned with citric acid at about 5% in de-ionised water. The upper surfaces of the specimens (as displayed) were much dustier than the other parts of the specimens and brushing alone was not enough, so these had to be cleaned with Synperonic A7 (a gentle conservation detergent, an alcohol ethoxylate). This was applied in dilute quantities in water to small areas at a time with a soft brush, then wiped away immediately with a lint-free paper towel. Then the same small area was cleaned with water (with no detergent) by brush and immediately dried again with a paper towel, then cleaned again with water and dried again, all in quick succession before moving on to the next small area. This was so that the water did not have time to sink in as this could cause swelling and cracking. The skulls cleaned up nicely.
21 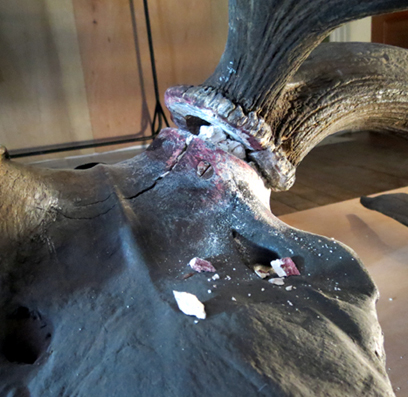 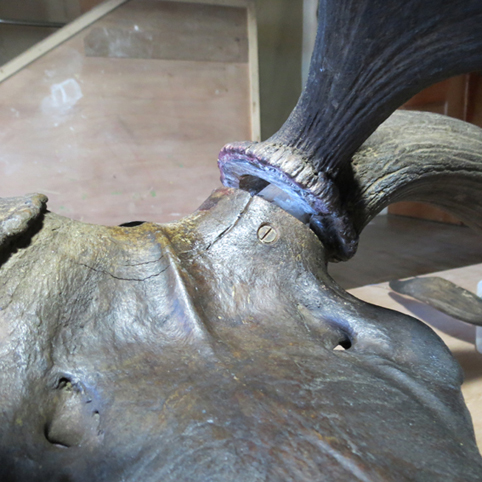 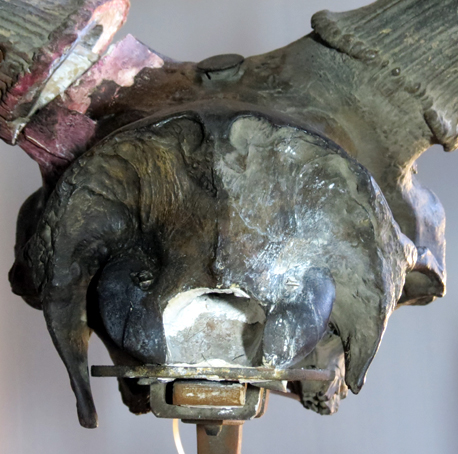 One of the skulls before cleaning (left), after cleaning (middle) and halfway through cleaning the rear of the skull (right).
Repairs: All repairs required were undertaken with reversible conservation materials and methods. The consolidant was Paraloid B72 (a reversible methacrylate co-polymer) in acetone at between 5% and 15 % in acetone. The adhesive, applied after sides of the break had been suitably consolidated, was Paraloid B72 straight from the tube, or made up at 50% in acetone. When repairing some tines a small thin wooden dowel was used to provide extra strength and support. Where small gaps between broken pieces required filling, or where gaps had previously opened up and indicated a weakness, Paraloid B72 adhesive was mixed with glass beads to form a strong reversible gap-filling paste, as described in Larkin and Makridou (1999). A handful of larger areas requiring gap-filing were filled with plaster of paris (e.g. figs 15-20). This was applied to areas that had been consolidated, to increase the strength of the bond between the antler and plaster. All the gapfillers were painted-out with artists acrylic paints.

Remounting: Resin-anchored bolts were used to hold the metal brackets in place on the wall into which the skull brackets slotted from above. Two more resin-anchored bolts were inserted into to the wall just above the picture rail for each specimen. From each of these a length of 1.5mm diameter twisted wire rope was looped around the antler to hold it in place (secured with aluminium ‘crimps’). The antlers were protected from chafing by the wire ropes by inserting them through clear polypropylene tubing where they rubbed against the antlers. This tubing was painted to match the antlers as far as possible. It is recommended that the upper bolts and the upper portions of the wires are painted-out to match the wall.
25 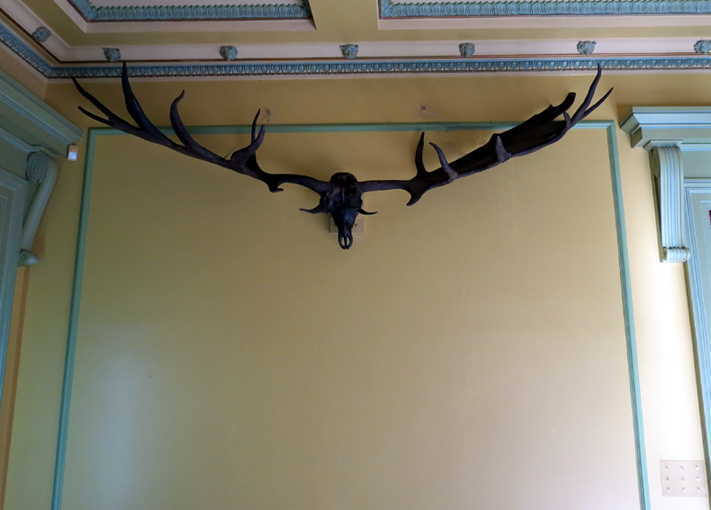 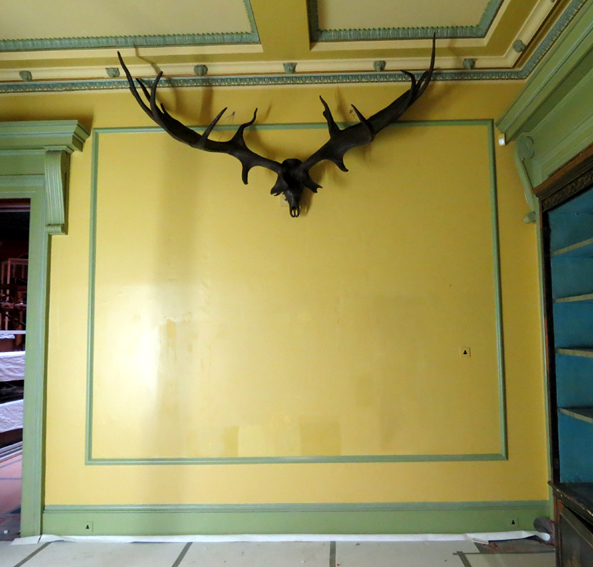 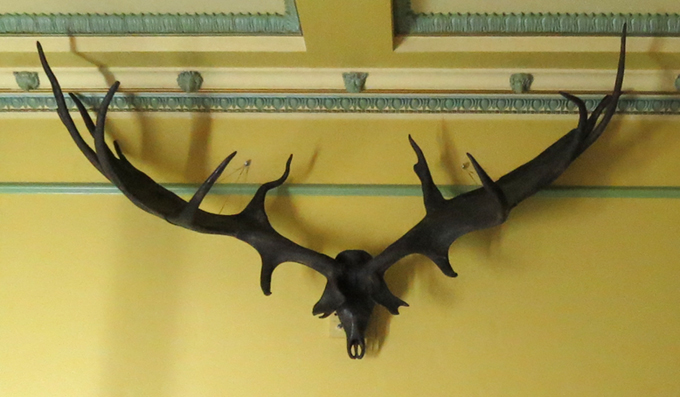