This mostly complete, 6 foot long, 185 million-year old Jurassic ichthyosaur skeleton from Lyme Regis, Dorset, had been on display for several years in the Kings Lynn Museum. However, during the recent redevelopment of this museum it was discovered that the whole specimen flexed quite badly when moved, as the frame constructed around it long ago was completely inadequate for the job. Also, when it was last conserved the material used to re-mount the specimen was never finished off adequately – and rings were still visible in what was presumed to be plaster, where pots had been left whilst it was setting.

Construction of a new, solid, adequate frame that would not allow the specimen to flex and that was more visually appropriate.

Completely remounting the specimen and finishing off the surrounding material to good effect.

Cleaning and conservation of the skeleton and host rock which were fairly grimy and here and there had flecks of paint and old glue visible.

Pictures of the specimen before conservation are below. 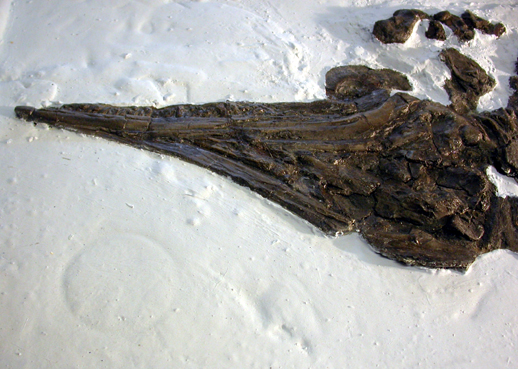 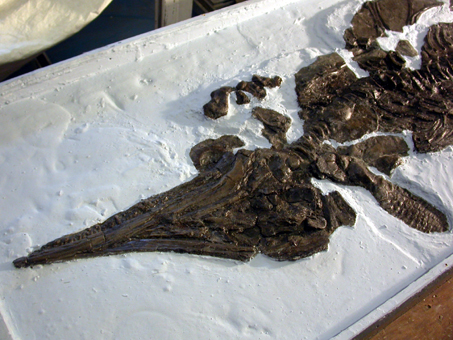 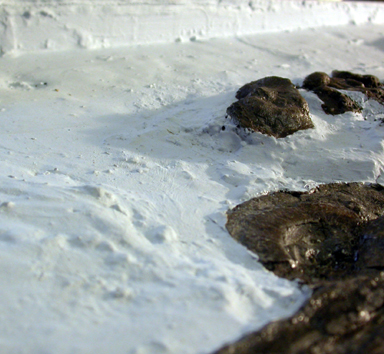 The old woodworm-riddled tongue-and-groove pine backing slats were removed with worrying ease, as were the sides of the frame enclosing the specimen. The old conservation and mounting treatments could now been seen.

Offcuts of Plastazote foam had been set in a poor, thin, brittle, gap-filler like material full of bubbles that was so soft it can be scratched with a fingernail. Presumably the insertion of random pieces of foam were to reduce the weight. The filler material had no strength at all and should never have been used – especially considering that the frame was too poor for the job and as soon as the specimen was lifted and it flexed in the middle all this backing material instantly shattered and crumbled. It provided no strength to the specimen whatsoever, even less so with the addition of the Plastazote foam. Not only did the frame flex horribly when moved, there was a real danger that the specimen could have simply fallen out. All of this filler was removed with ease as it was already shattered and was brittle. The foam also was removed.

Much of the old plaster that surrounded the rock slabs containing the skeleton was removed carefully with a variety of appropriate hammers, chisels, and pneumatic tools, working on the back of the specimen which was still uppermost. This greatly reduced the weight of the specimen. To reinforce the specimen and to protect it from further flexing, the decision was taken not only to improve the wooden frame but to use Jesmonite acrylic resin with glass fibre to make a permanent re-enforcing jacket for the specimen.

The rock slabs were consolidated to provide a better surface for the resin to adhere to, and to provide a barrier layer between the resin and the rock. These slabs and the remaining plaster were coated in a gelcoat of Jesmonite resin, followed by several alternating layers of resin and Quadraxial glass fibre until a thick and very rigid jacket was attached securely to the rear of the specimen.

Pictures of the specimen before conservation are below. 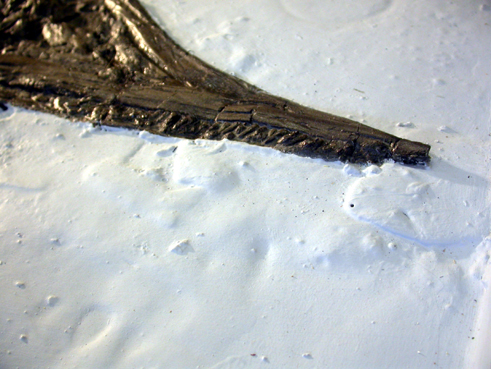 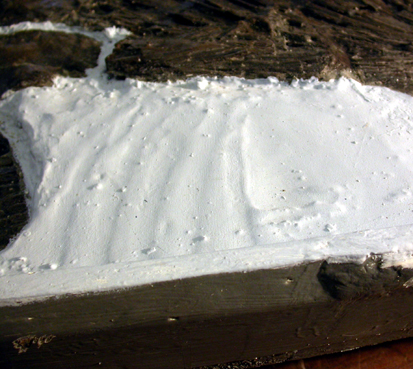 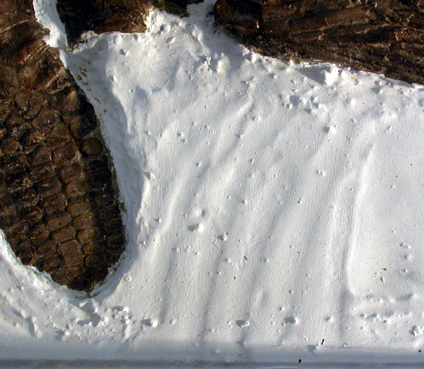 The frame:
The original wooden frame and backing was very poor. Not only was it far too flimsy to give any real support to the long, thin, heavy specimen but it had been badly damaged many times in the past and quite simply was looking awful.

The backing wood was carefully removed (described above) and the surrounding framework was removed also. A professionally constructed mahogany frame was ordered from specialist cabinet makers. Inside this to keep the completed specimen rigid were secured two lengths of timber approximately 100mm by 100mm thick. A sheet of 18mm thick marine ply (very strong wood) was cut to the right size and secured with screws inside the rear of this frame on top of these two timbers, to act as the back of the specimen. Dozens of short screws were screwed through this back board so that they protruded into the space where the specimen was to be put by about 5 to 10mm. These were to help the ensuing layers of Jesmonite resin to grip to the back board, as the specimen in its new Jesmonite resin jacket was lowered gently down onto a thick layer of Jesmonite gelcoat after several layers of resin and fibre glass had been applied to the back board. 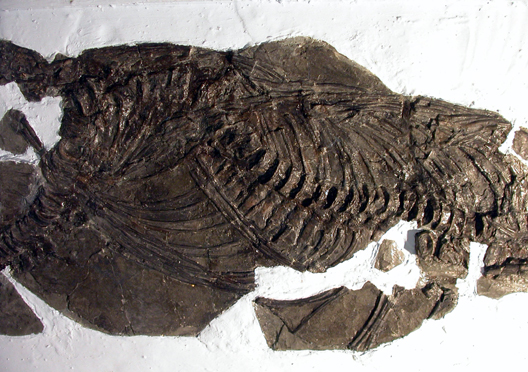 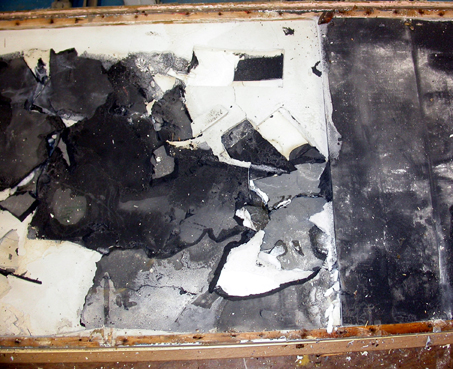 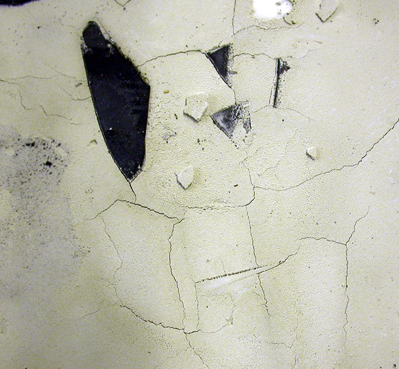 Finishing:
Once the Jesmonite underneath the jacketed specimen had set, the top of the specimen was finished-off ready for display. This entailed clening the specimen with a high powered jet of air, acetone swabs, and work with a scalpel to remove all the grime, paint and old glue. Some of the old paintwork was removed as it has been carelessly applied over the edges of bones. Other areas were refreshed and touched up. Old gaps were filled, and areas where plaster had been removed were filled with Jesmonite resin. The resin and old plaster were sanded smooth and painted with grey acrylic paint. Previously blue and green paints had been used on the specimen, but all traces of these were removed.

The specimen had a thin coat of consolidant applied, and the frame was cleaned and waxed .

Materials:
Adhesive: the methacrylate co-polymer Paraloid B72. Consolidant: the methacrylate co-polymer Paraloid B72 in acetone between 5% and 20% volume:weight. Gap-filler: Paraloid B72 in acetone between at 25% volume:weight, mixed with glass beads (44 microns diameter) at a ratio of 3:1 beads to Paraloid. Resin: Jesmonite acrylic resin AC100, with multi-axial woven glass fibre matting.

Picture of the specimen AFTER conservation is below.