Survey: The various displays of fossils and the geology collection stores were assessed for conservation problems. Every single box was inspected for damp, broken or damaged specimens or poor/cramped storage. As a matter of priority - as this area has suffered from water leaks in the past - every box was inspected for signs of pyrite decay. Very few problems were found other than the various specimens that had been put aside over the last few years to be worked on. The remedial conservation procedures undertaken on these specimens are described below. That so few specimens were found to require treatment out of 252 boxes is a very good indication of how well the collection is cared for. Recommendations were made regarding labelling, storage, shelving and general housekeeping. 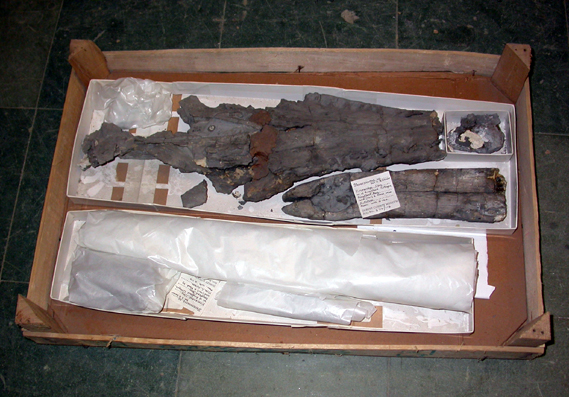 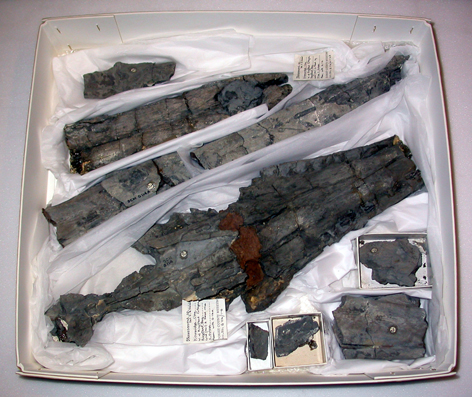 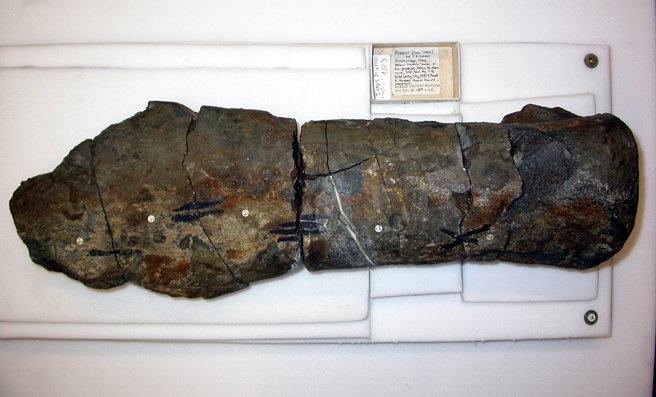 Pliosaur limb bone from the Kimmeridge Clay. This specimen was in eight pieces, was suffering from pyrite decay and was inadequately stored. The by-products of pyrite decay were removed with a scalpel and pneumatic engraving pen and the specimen cleaned with brush, conservation vacuum cleaner and compressed air. The various broken surfaces were treated with PB72 consolidant (20% in acetone), and glued together with PB72 adhesive – with one exception: as the specimen was so heavy and in so many pieces it was felt best to leave it in two pieces, else it might fall apart under its own weight when handled. However, it is now in two pieces rather than eight and looks much better for it, recognisable as a limb bone. The whole surface was a bit flaky and as it is prone to pyrite decay the whole surface of the specimen was treated with PB72 consolidant 10% in acetone. A strong wooden box was constructed for its permanent storage and an appropriately shaped ‘nest’ was created inside the wooden box for the bone, made from bubble wrap and acid-free tissue paper. 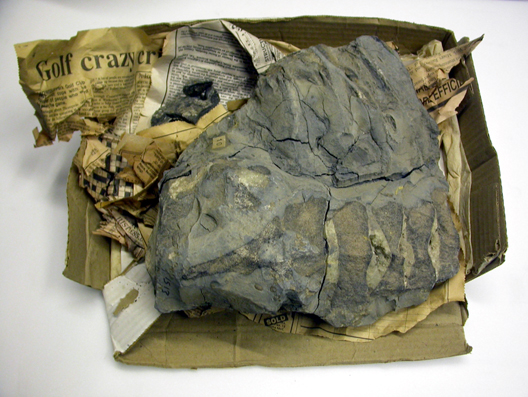 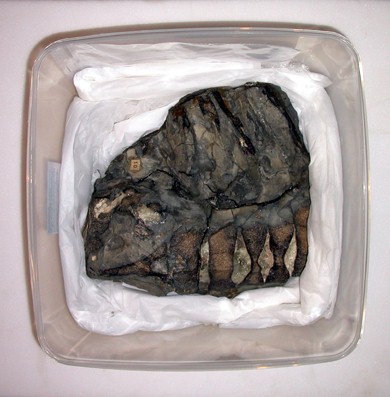 Large block containing reptile vertebrae. This block was suffering from active pyrite decay and had cracked and was starting to fall apart. Also, it was stored in the remains of an inadequate cardboard box in a nest of old newspaper which was deteriorating due to the sulphuric nature of the by-products of the pyrite decay. The specimen was cleaned with a soft brush and conservation vacuum cleaner followed by compressed air and a scalpel. Friable areas where the pyrite had been activated, once cleaned, were consolidated (PB72 in acetone at 5-10%). Cracks had consolidant applied to them: 5% followed by 20% before the former had set, to draw-in the thicker consolidant by capillary action. This was followed by PB72 adhesive. Broken pieces were reattached after consolidating. To reduce the likelihood that the specimen would deteriorate again due to pyrite decay in the future, the surface of the specimen was consolidated with PB72 in acetone at 5% and a good quality lidded polypropylene food container was purchased in which to store the specimen permanently (a ‘Stewart’ container, the lid of which provides a good seal, making an ideal microclimate within the container so it can act as a buffer to fluctuations in humidity). 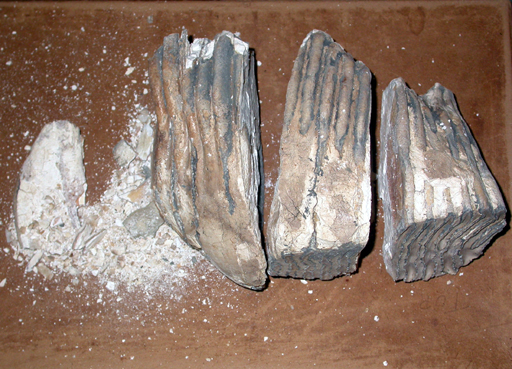 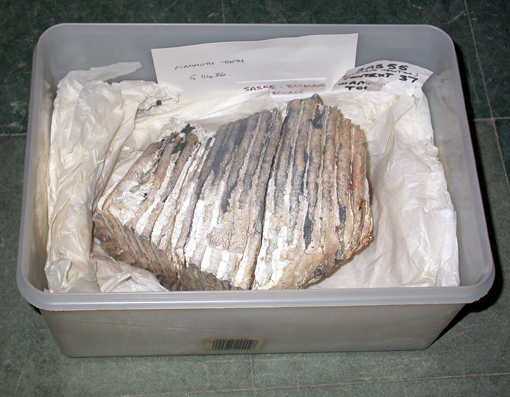 Mammoth tooth. This was in several pieces. The old adhesive used to repair it before had failed. The old adhesive was removed with a scalpel. The sides of the breaks were consolidated with PB72 consolidant 10% in acetone, then after this set PB72 adhesive was applied and the pieces joined and left upright to set. The specimen was repackaged in a ‘nest’ of bubble wrap and acid-free tissue paper, to take the weight of the specimen throughout its length.

Various ammonites: These had been put to one side to be treated as they were suffering to greater or lesser extents from pyrite decay. In each case the by-products of pyrite decay were removed with a scalpel and where necessary a pneumatic engraving pen, then cleaned with brush, conservation vacuum cleaner and compressed air. This was followed where appropriate with an application of PB72 consolidant 5% in acetone to both protect and enhance specimens. One ammonite was lost entirely to pyrite decay. Three other ammonites and one pyrite nodule had been selected for possible de-accession as their pyrite decay was so extreme, but these were also treated with some success. 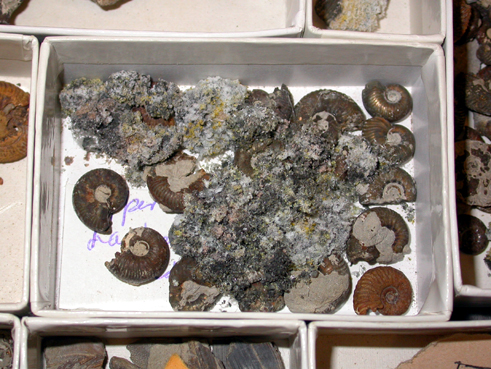 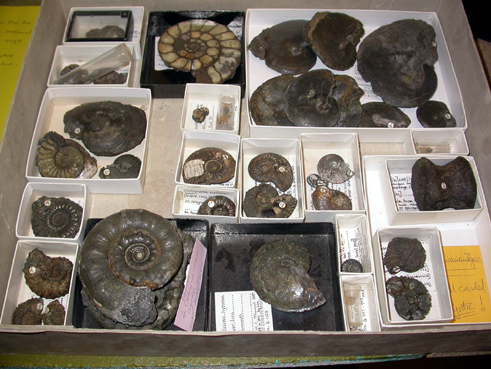 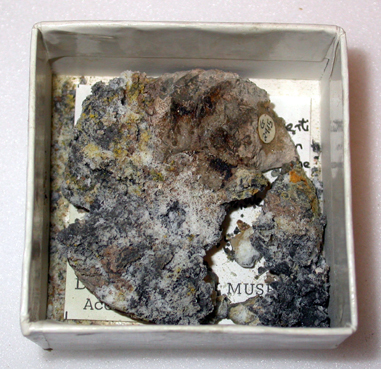 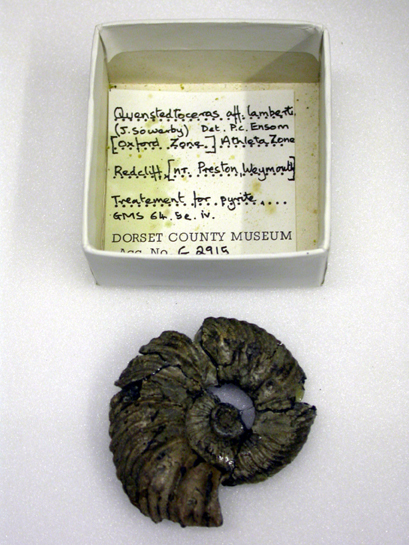 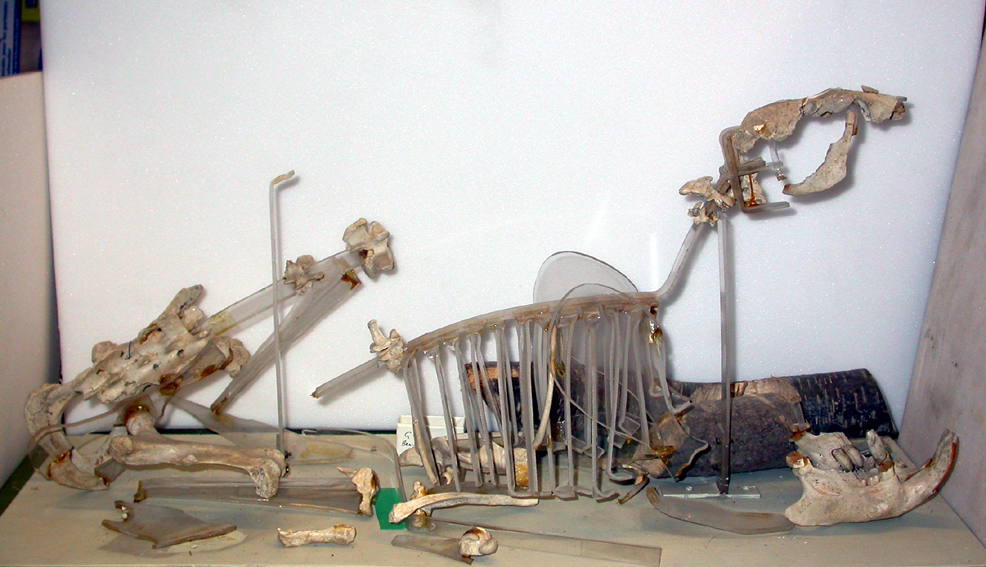 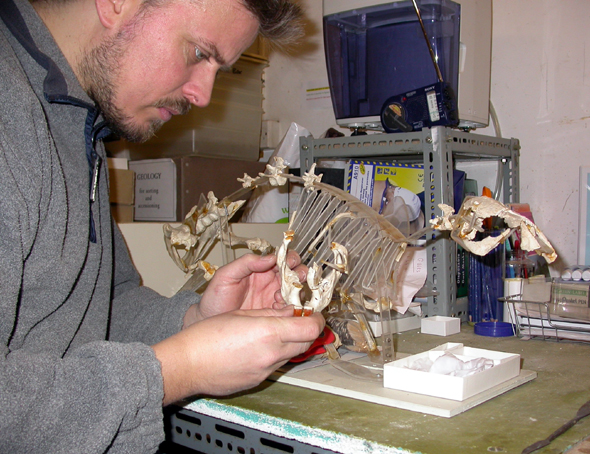 Mounted beaver skeleton. The aged Perspex armature with an assortment of bones Araldited to it had clearly been falling apart for some time. The Perspex mounts were fixed with PB72 glue and Superglue and where necessary with nuts and bolts. The Perspex ‘feet’ were screwed to the wooden base. Experiments were undertaken to mechanically remove the old, unsightly dark brown Araldite glue from the bones but in each case a thin layer of the surface of the bone would come away attached to the glue. This specimen is not going back on display, it only needed to be rebuilt for storage in a way that reduced further damage to the specimen and so that the association between the various bones could be kept. Therefore it was decided that the Araldite would be left in place and the armature would be rebuilt. The mandible was not remounted as it was heavy relative to the rest of the fragile armature and it would have placed unnecessary stress on the Perspex mount. 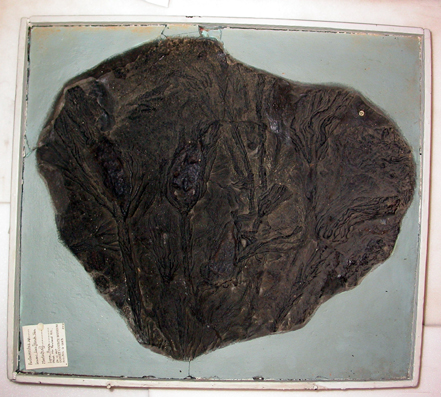 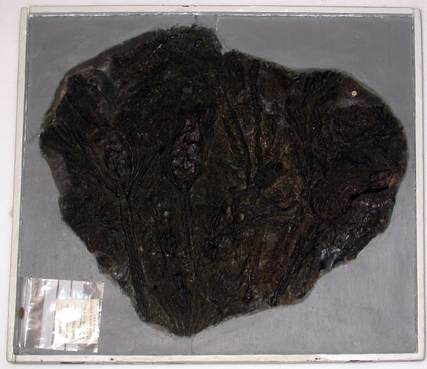 Pentacrinites. From the Lower Lias Black Ven Marls, Lyme Regis 1907. This specimen, mounted in mortar and encased in a wooden frame, was cracked with loose mortar pieces and some surrounding mortar pieces missing. The wooden surround was in poor condition, with batons loose and nails sticking out. The nails were removed and the frame fixed with PVA adhesive and clamping. The cracks were investigated and where necessary consolidated with Paraloid B72 in acetone at 10% weight to volume. The cracks and missing areas in the surrounding mortar were filled with PB72 in acetone at 25% weight to volume mixed with inert glass beads to form a paste. The crinoid specimen was cleaned with a soft brush and conservation vacuum cleaner, followed by a gentle blast of compressed air and a gentle swabbing with acetone. PB72 at 5% in acetone was applied to the surface of the specimen to enhance the surface detail and colour and to provide a barrier to dirt getting ingrained in the future as well as providing a partial buffer to future humidity changes. Excess paint was removed (with careful use of a scalpel) from the specimen where the surrounding mortar had been inexpertly painted in the past, and splatters of paint were removed from the specimen generally. The surrounding mortar (and filled gaps) were repainted with acrylic ‘Middle Grey’. If this specimen goes on display, the wooden frame will require stripping and sanding.

Framed ichthyosaur skeleton on the wall above the main stairs. This large partial skeleton was exhibiting signs of small-scale pyrite decay in a handful of areas. These required investigating. Also, the specimen was quite dirty and grey. The specimen was cleaned with a soft brush and conservation vacuum cleaner, followed by compressed air. The specimen still had ingrained dirt stuck to it, and this was removed with the swabbing action of acetone brushed onto the specimen and wiped off with tissue. Areas of active pyrite decay (tail, ribs and humerus) were cleaned with brushes and scalpels and the decay appeared to be relatively superficial. The area of decay in the lower portion of the ribs was extensive in spread, but did not penetrate far into the specimen. Once the by-products of decay were removed, the gaps left behind were consolidated and filled with PB72 at 25% in acetone mixed with inert glass beads to form a paste. Once dry, the gap filler was painted-out with acrylic paints (raw umber, middle grey and mars black). Old drops of white paint were removed from the bones with a scalpel, as was the occasional mis-application of grey paint from when the surrounding mortar was repainted. Similarly, old dribbles of glue were removed from the surfaces of the bones. The whole specimen was given a single application of thin consolidant - PB72 in acetone at 5%. This greatly enhanced the specimen as it brought out the natural colours in the bones. It will also help to reduce the likelihood of pyrite decay in the future.

The two photos on the left show the specimen before cleaning, the photo on the right shows the specimen after cleaning. 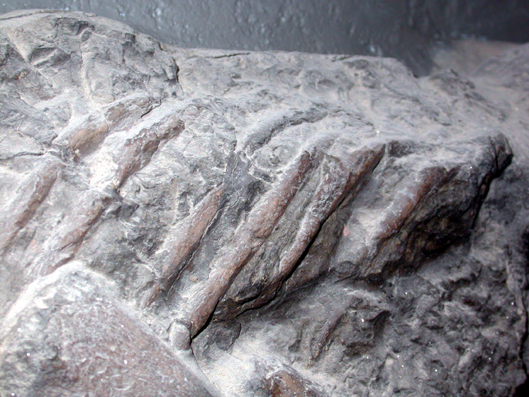 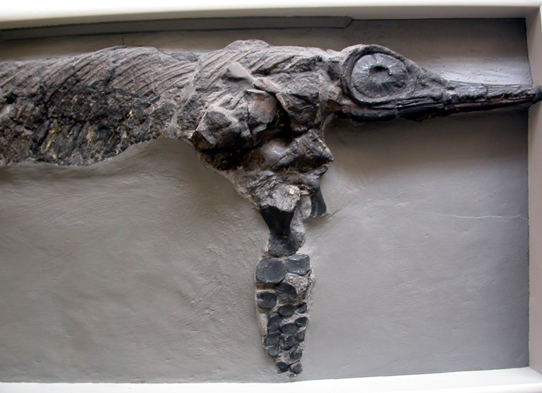 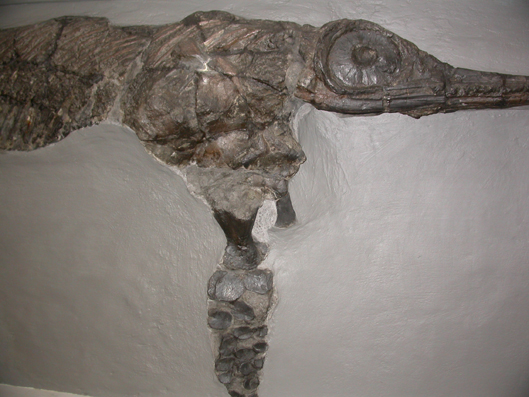 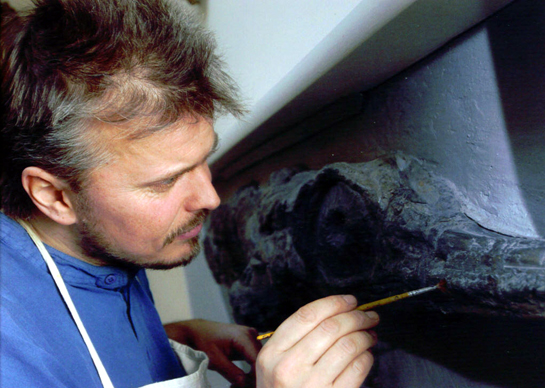