Conservation of taxidermy specimens at Great Chalfield Manor (near Melksham) May 2014.

At this property a variety of mounted taxidermy specimens had to be conserved, repaired and analysed for traces of arsenic. This included 14 Red Deer stag heads, a Bengal Tiger and a Sloth Bear head. The tests for arsenic were largely negative but showed minute traces of up to 50 parts per billion.
The heads were generally quite dirty and some had deteriorated with areas of skin lifting, ear tips delaminating and some areas of plasterwork crumbling away. They were mounted either by Rowland Ward of London or by Spicerĺs of Leamington Spa. The property also has the game records of when these specimens were taken and mounted in the early 1900s.
The heads were brushed down and then cleaned with cleaning foam. Although not much dirt came out of them their appearance was much improved and they were rubbed down with industrial methylated spirit to remove any deposits left behind by the foam. They were ready in time to be mounted back on the walls of the hall for some performances of Mozartĺs Magic Flute. 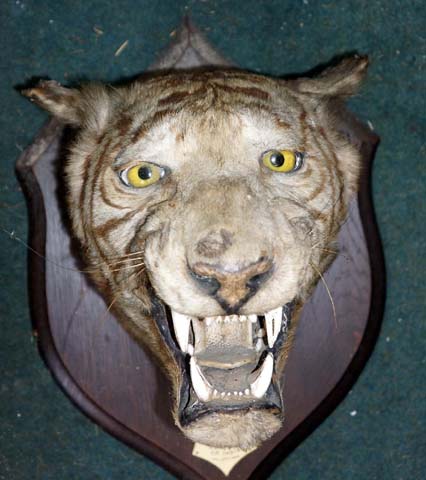 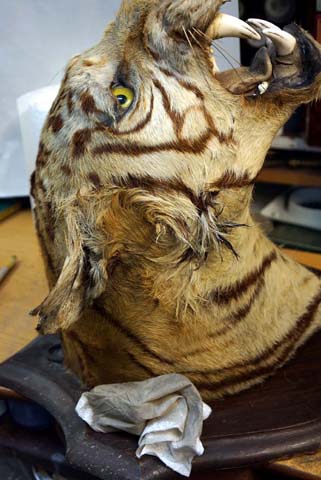 A Bengal Tiger head from Buitikirki, India, mounted by Spicer of Leamington Spa c. 1910. Left, before cleaning. Right, during cleaning. Note how with cleaning, the natural colour partly returns. 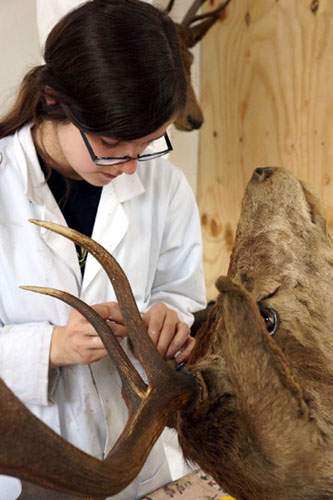 Above left: Ten of the cleaned and conserved Red Deer stag heads back on the wall and likely listening to the Queen of the night aria! Above Right: Heather Davies, who assisted Simon Moore, cleaning one of the stag heads.